A game about helping Cavemen survive the coming Ice Age but to help them you'll need to learn their language first! This is done by observing the Cavemen, repeating what they say and experiment through trial and error. Just like in learning real languages this causes some confusion and hilarity.

Our Team Lead Oskar tells a bit about our experience at the Indie Game event INDIGO.

So we got to showcase Tribal & Error on INDIGO 2014 and it was an amazing experience! We met so many great people, gamers enthusiastic about our game and developers with a passion for their own work. The question most asked to us was probably ”when is it coming out?” unfortunately we can’t yet make any promises on that yet. Things are still quite early in development.

This was our first big event so preparations were almost as much a learning experience as the event itself. The first two and a half weeks in our new office were spent on that preparation. Before we received our fancy new office space, Tribal & Error was a second year student project built between lesson hours. We spent that time building a proof of concept prototype in the cave level. Now that we are able to work basically fulltime we were eager to start expanding the game. However we realised in order to showcase a stable game on INDIGO a proof of concept wasn’t going to cut it. Nor would it form a solid base to expand to a full game. So the code had to be reworked and refined. For the art team priority lay in the making of promotional material, new logo’s, posters, flyers and business cards. 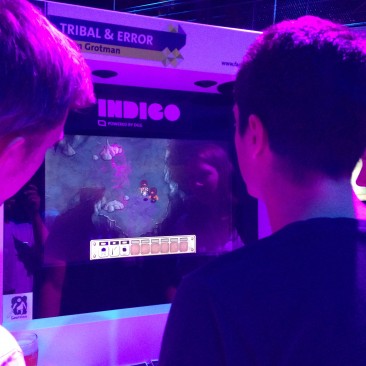 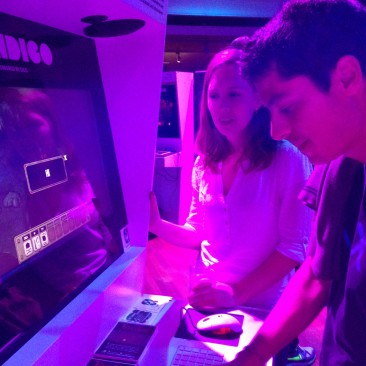 Something that we were aware of but also became more apparent on the event, is that with it being a slow paced puzzle game, it isn’t perfect for events. Normally the player takes his time to figure things out, but with so many things to see, people try it out for few minutes and then move on. In those minutes we need to convince gamers as well as press what makes Tribal & Error great. Therefore a short and solid pitch was vital, we had worked extensively narrowing down what the game was about. However with the variety of the crowd it also became apparent that the same story wasn’t going to work for everyone. Different people were interested in different things or needed different methods of explanation to understand the game. A lot of players struggled at first to go back to such a basic form of communication and thinking. Often they can see the solution being so simple and within their reach yet feeling stupid for not knowing how to get there. Yet when they do understand their eyes light up, and in that moment the struggle becomes worth it hundred times over, for playing the game as well as making it.

I’d like to thank the people from the Dutch Game Garden who gave us this chance and worked tirelessly to make the event a success, which it certainly was. If you didn’t get the chance to try it out Tribal & Error you’re welcome to do so on our the next event, for those who did thank you for playing and we hope to see you again.