Trials of Azra is a puzzle platformer game where you have to defeat and control your enemies to make your way through the levels.

Sam was, in all appearances, just a regular kid who liked to play with his dog and drink chocolate milk at 4:00 PM. But that doomed day, the sky turned red, wind was blowing hard, lightning struck, and Sam was sucked into a mysterious castle. With no more than a cryptic guide, and some newly discovered powers, he has to find his way out of there.

The gameplay is mainly about defeating and controlling your enemies, then using them to solve increasingly difficult puzzles.

Once you control an enemy, you can switch back and forth between it and Sam. This ends either when the controlled enemy dies, or you start controlling another enemy (you can control just one at a time).

The game features local co-op, which will probably (if you and your buddy get along) make things a little faster and more fun. Careful though, now there are 2 players who can mess up a puzzle or get killed by a deadly trap!

The main way to deal with Sam's foes is by using magic. Aside from the basic projectile, there is a number of spells to learn. Spells consume mana, so you should keep an eye on that blue bar.

Health and mana regenerate with food. Which sometimes can be found served on a table, but really, is there anything better than eating it straight from the floor of a room inhabited by giant rats? We don't think so.

While some enemies like to just randomly roam around the room, others have unique attack patterns, so the player would be wise to approach them carefully.

Some devices interact with all kinds of enemies, like the floor switches. But other situations require to use the right enemy in the right place. Some examples, a big fat dude breaking some walls with it’s giant mace, a ghost that can move through walls, or a stone golem Sam can ride to cross a path filled with deadly spikes.

Part of the game is finding out how to use each enemy to solve what’s at hand. 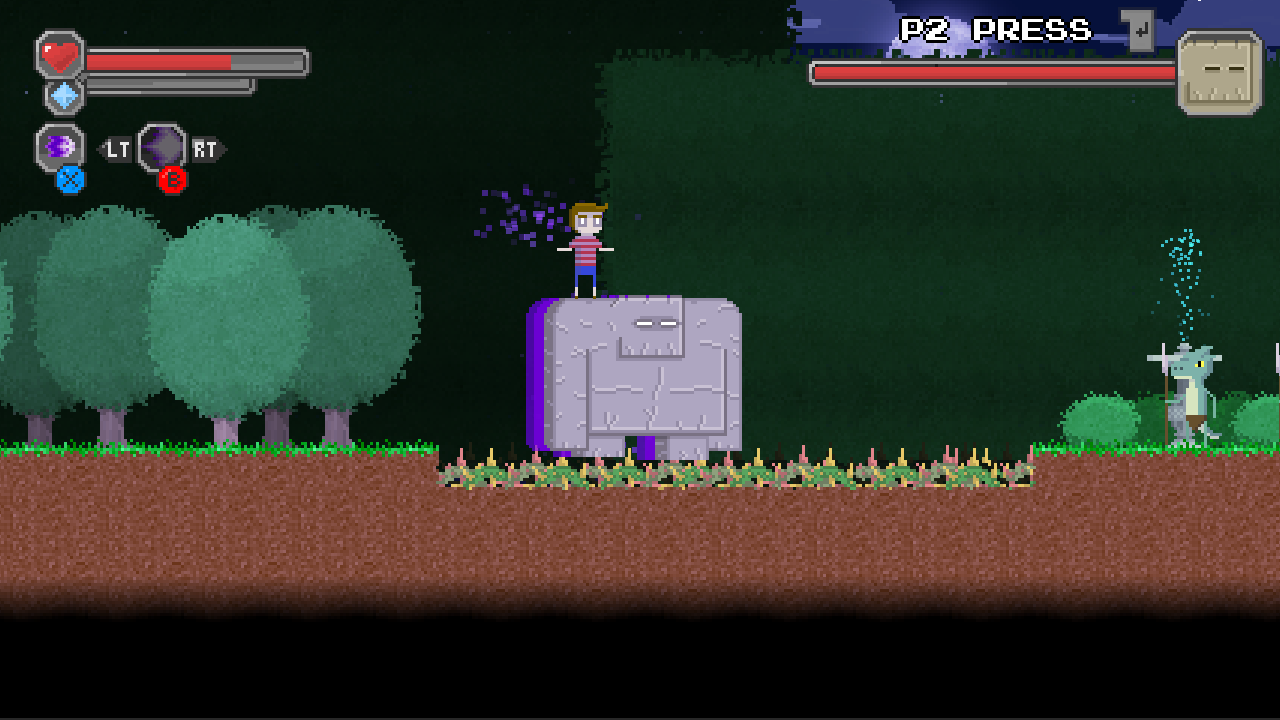 You’ll find that not all characters are hostile. Some of them, like this cute orange thing, are just fascinated by Sam and want to follow him everywhere. Of course, if you damage them, they’ll probably run away scared and heart broken.

The game contains 5 large areas, each of them introduces new enemies, traps, and devices unique to that area, as well as some elements that are present through all the game.

Finally, each area contains a boss the player needs to defeat to advance onto the next one.

Each boss has a way to make them weaker using the environment, so it's not all fighting and no thinking.

We intend to challenge the player's wits and skills with increasingly difficult puzzles, and keep introducing new content as the game advances, mixing it with the already adquired knowledge in order to make it more complex the closer it gets to the end.

Thanks for voting and helping Trials of Azra on it's quest to become the 2021 Indie of the Year. You are now in with a chance to score some free games. Help this game secure more votes by embedding the widget (or link) we have included below on your favorite sites.

Finally, the launch day has come, after almost 2 years of work (of a 2-person team), we proudly present Trials of Azra on Steam.

As a countdown method, we put the game's introduction on separate gifs and posted them on several social networks, one for each day, from 5 to 1.

(Sam is playing fetch with his dog Levi)

(A storm is coming, Levi is upset about something)

(Levi met a terrible fate. Sam controls him and opens the door)

(Sam struggles against the wind to reach safety)

That is roughly the sequence that gives place to Sam learning of his powers and beginning his adventure, in a castle full of 'trials' that will challenge his wits and skills.

We also made some changes in the trailer for the full release:

If you liked the article, check out the game on Steam:

We wanted the trailer to be more focused on the main mechanic of the game, that is possessing the bodies of your fallen enemies and solving puzzles with...

Trials of Azra is finally released on Steam Early Access with an initial weeklong discount of 10%!

Trials of Azra is coming on Early Access on August 1st!

Just days away of the release on Steam (on August 1st), we tell you about the last development efforts and showcase some cool artwork.

Trials of Azra - Onion Core - Early Access Demo - Windows 64 bits build. THIS DEMO IS NOT SUPPORTED ANYMORE DUE TO THE GAME BEING FULL RELEASED. IT MAY...

Trials of Azra - Onion Core - Early Access Demo - Windows 32 bits build. THIS DEMO IS NOT SUPPORTED ANYMORE DUE TO THE GAME BEING FULL RELEASED. IT MAY...

Trials of Azra - Onion Core - Early Access Demo - Mac OS universal build. THIS DEMO IS NOT SUPPORTED ANYMORE DUE TO THE GAME BEING FULL RELEASED. IT MAY...

Trials of Azra - Onion Core - Early Access Demo - Linux universal build. THIS DEMO IS NOT SUPPORTED ANYMORE DUE TO THE GAME BEING FULL RELEASED. IT MAY...

Hey! I made let's play ;)
Would you like to see? Youtube.com

Glad you like the graphic style. Thanks for your support!

Thank you for your interest!

Thanks for the chance!

ohh ,just found this .thanks for the info.

Hope you get to try Trials of Azra =)