Back with HD weapons, starting with the shotgun and pistol. Working on grenade throwing for the player. Individual soldier AI has been heavily upgraded to move and attack more aggressively, check out the demo videos.

Hi everyone and sorry for the lack of updates in the last 2 months, I was a little busy at the time but I'm back working full speed.

Environments have been fleshed out and AI behavior has been upgraded. They can now search and report to others, and attack much more aggressively.

While most combat encounters will be at brutally too close for comfort range, the AI have been upgraded to move and take cover more effectively in larger, open environments as well.

The future of AI

One of Trepang2's strengths is its AI. AI hasn't changed much in the last couple decades of FPS games, with most complex enemy behavior now being relegated to level designers, not AI programmers. Most enemy "AI" is really just movement following level scripts and triggers (i.e. when the player enters the room, move to these positions and shoot at him).

The problem with this is that it often leads to inconsistent, erratic and "psychic" behavior. It always feels like enemies are just waiting until you reach the next trigger (even if they didn't see you) to start their next behavior, whether it's an ambush, retreat or even moving to attack the player. It's also extremely tedious for the designer, and as an indie I don't have access to a level scripting team or QA team to fix hundreds of level scripting bugs.

So with this in mind my ambitious goal is:

To make the best AI ever in an FPS game.

The last attempt was FEAR in 2005, and I'm confident I'll do much better with modern technology and improving on their ideas.

Currently the AI already outshines most modern games out there, AAA or indie (with the exception of a few nasty bugs), despite being so early WIP. I'm in the process of rewriting the goal system now (defending, patrolling etc), and it should be in a working state by next month. By then, be ready for some truly next generation AI, that can counterattack, prepare ambushes, and many other tactics and strategies, without using any scripts or triggers.

As you might have noticed, we've got HD remakes of those cartoony placeholder guns. The overall presentation is being upgraded at the moment, aiming for near photorealism. 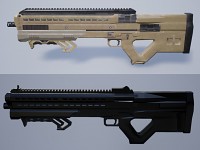 I have to apologize, I announced releasing a demo a couple months ago but I decided the quality wouldn't have been high enough. I'm aiming for much better graphics and AI for an overall much more immersive and high quality experience. Perhaps sometime in early-mid 2018 this demo will be available to the public, please stay tuned and follow for more news!

Some other random gameplay videos:

This actually looks really awesome and I'm glad you brought up FEAR as that's probably the most dynamic AI we've had to date.

I'm curious about the game itself, will it be a linear narrative driven game or is it an arcade arena type shooter made up of different levels?

Thanks! FEAR has been a huge inspiration but now I'm actually aiming to outdo them in AI, there's a lot more that can be done now that over a decade has passed.

As for the game itself, very little has been announced because it's not ready yet (even the name is placeholder). But I can confirm that it'll be basically a linear narrative game, but the levels and objectives will be sandbox-like, meaning you have some room to wander around or backtrack. There won't be any scripted set pieces forcing you to go forwards or quick time events etc

Fantastic, definitely keeping an eye on this!

Fantastic as well. I do want to keep an eye on this as well especially since I love Fear. Having superior AI is also something I like when it comes to games especially since I can't always be online like some people who are.
Keep up the good work.

Absolutely agree, this looks pretty stunning for something that's not even in Alpha yet.

Thanks for the kind words guys! Coding up some neat AI stuff for next update, can't wait to show it off :)

As much as I want to get my hands on a new demo, I'm glad you take your time to give us a demo that will probably blow our minds :D

Thanks for your understanding. It's going to be worth the wait, I promise!