Battle through the alps in this WWI-inspired side-scrolling strategy game.

Posted by Vashta-Entertainment on Jan 1st, 2016 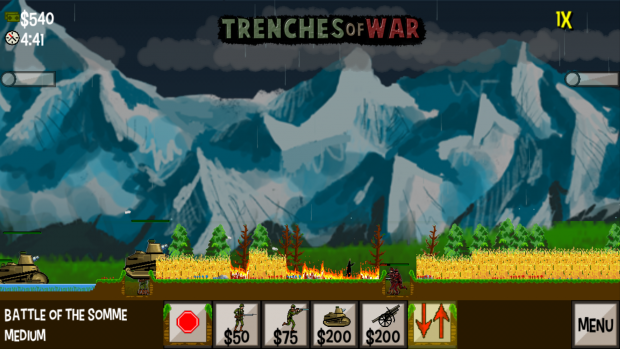 Today we're happy to announce and release the first of a series of updates to Trenches of War. This update brings new missions, battlefield mechanics, and gameplay improvements.

First and foremost, we're happy to bring our level count from 8 to 25 - we've decided to integrate the classic levels into the new set of levels rather than treat them as a separate campaign entirely. These levels are scattered throughout the campaign in places we felt appropriate. We've added additional tips to explain the game mechanics and suggest that even experienced players play this update from the first mission. 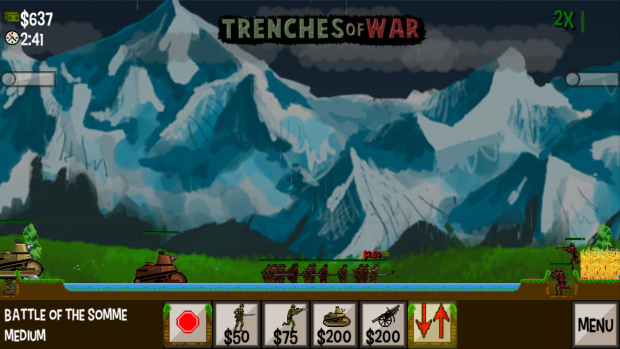 We've added three new features to the battlefield. Two of these features - rivers and cornfields - are new blocks on the map. Rivers slow troop movement, making certain trenches particularly difficult to conquer. Cornfields conceal units from basic infantry, providing some cover for advancing units. Like trees, cornfields are damaged by artillery and tanks and can be destroyed.

Maps now contain a chance of rain. Rain raises the water level on rivers, making troops move much more slowly across them. With weather always subject to change, this adds an additional level of uncertainty when attempting to conquer a trench. Troops crossing a raised river will only move at 1/3 of their normal speed, leaving them incredibly vulnerable to fire.

Additionally, we've tweaked and improved the gameplay in several places. Target selection has been greatly optimized, which should make the game much more friendly to low-end devices. Troops will no longer run past each other if they are both benefiting from an immunity buff - instead, they will stand facing each other until one of their buffs runs out. The "Hold" button will now halt all units. The effect for explosions has been improved.

Play Trenches of War for free here. Let us know what you think of these changes - and stay tuned for the other updates we have planned for the coming months. 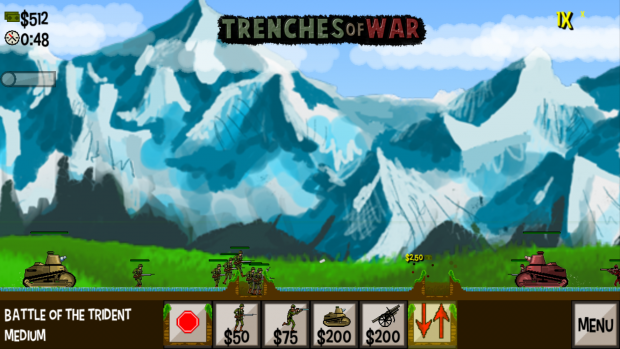