Tomb Raider: The Dagger of Xian

Tomb Raider DOX (The Dagger of Xian) is a remake of the original Tomb Raider 2 game made by Core Design in 1997 using Unreal Engine 4 by Epic Games.

With easily-accessible engines such as Unity and Unreal Engine 4 allowing hobbyist and indie developers to create beautiful projects of a larger scope than ever before, some developers are taking to remaking classic games from their formative years. IndieDB spoke to two such developers. The first, Jeff Lindsay, is working on remaking the SNES version of Jurassic Park – or more specifically, remaking the first-person Visitor Center levels from that game, in Unity.

The second developer, also using Unity, is Robert Medina, who is working on remaking Rare’s classic SNES platformer Donkey Kong Country 2, with a project titled simply Donkey Kong Country 2 HD. In addition to the above developers, we’ve rounded up some of the most exciting projects from other teams and individuals who are remaking their own chosen classic games in new engines. See them all, below!

IndieDB: What prompted you to decide to work on remaking your chosen retro game in a new engine?

Jeff Lindsay, developer of Jurassic Park’s Unity remake: “First, it's Jurassic Park. Second, I felt that remaking a SNES game, or part of one, was a bit more novel than an old PC game. With PC games, you usually have direct access to the assets. So the barrier to entry and work involved in recreating it seemed to make it a more special project.”

I wanted to see how the original games might look with modern 3D graphics, as if they were made today

How did you choose which engine to use for your remake?

Lindsay: “I was already working in Unity on a tool that reproduced the workflow of the Build engine. The speed of throwing together levels in Build was crazy compared to anything after. I made so many Duke Nukem 3D levels in middle school. So once I had this tool in Unity, I had all kinds of ideas for projects I could use it for. But one day I decided to recreate the first floor of the Visitor Center for fun, just the geometry as a demo. The Visitor Center was much simpler than what the tool was capable of, but it helped prove my editor extension as a usable tool for something real.”

I made so many Duke Nukem 3D levels in middle school

Medina: “I use Unity because it's what I already know, it can do what I need it to, and I find it relatively easy to use with my weaker coding skills. I didn't want to spend time learning a new engine on top of everything else for this project.”

How closely are you choosing to stay to the original game's design? What technological advances or new design trends are you taking advantage of?

Lindsay: “I tried to reproduce the look and content as exactly as I could. It's not exactly pixel perfect because I ended up getting most of the art assets via screenshots in an emulator. After I released the game, somebody got in touch with me that built a tool to extract all the art from the ROM. With a lot of SNES games you can't just get a dump of the art. Well, in some you can, but even that is a whole process. But a lot of games, including this one, use a custom encoding scheme so extracting the art would mean reverse engineering the ROM and building a tool for that specific game. I didn't have time for that, but apparently somebody out there did.

I did make the game more playable and suited to modern platforms. Even though it's pixelated at the same resolution as the SNES, that's a post effect. The game can be run at any resolution and with widescreen support. The original also suffered from a very low FPS, so it was choppy and unresponsive. I didn't see any reason to reproduce that. I wanted it to be fun.

The biggest difference is in the scope: it's just the Visitor Center interiors. So as a standalone game I had to come up with a new goal and change some entity placement. Though a lot of them are exactly the same. I started with the same placement for enemies, items, and locked doors as the original and moved or added them as needed.

I also made it hard. In some ways I had to make it harder because it was easier to play when it had more responsive controls. But the original was hard and the overall game had no saves, so I tried to recreate that experience. I tried to capture the spirit of the original.”

I tried to match the original designs and animations as closely as possible using the original sprites for reference, and modernize the game in other ways instead

Medina: “I've generally tried to stay very close to the original game to respect the design choices made by Rare at the time, and because my intent was to recreate it as I and other people remember it through nostalgia. I tried to match the original designs and animations as closely as possible using the original sprites for reference, and modernize the game in other ways instead.

The main change I've made is extra animation for assets which were static in the original game due to technical limitations. This was inspired by the more recent Donkey Kong Country Returns games. These changes include the vertex shader that makes the vines slowly pulsate, extra animation on the barrels, pixel shaders for depth of field, motion blur, and light rays, as well as particle effects. I still wanted it to feel like the original game though.

Another change that had a bigger impact than expected is the switch to widescreen format, which required some changes to the original camera boundaries, as well as adjusting enemies which are triggered by appearing on screen. The original game was very carefully designed to flow perfectly on a 4:3 screen, so changing the aspect ratio affected many areas of gameplay.”

Do you have any intentions to pursue development of original games in a professional or hobbyist manner in the future?

Lindsay: “I've been working on games since I was a kid, then took a detour from them in my 20s. Now I'm refocusing my priorities to get back into games. Visitor Center was actually my first released game. Since then I've released a game jam game, and I'm now working on a small scale commercial game with a friend.

It's also a remake, but of a freeware indie game that he made in 2011 called The Indie Game Legend. It was a top down arena shooter in the spirit of the NES cult classic The Guardian Legend. I decided to remake it as a first person shooter, using mostly the same pixel art assets. This time I had direct access to the art since he gave me the original Game Maker project. I made a demo and showed it to him and he was so excited he jumped on to add more content and update some of the art to work better for 3D.

We're releasing that at a pretty low price point, mostly as an experiment. So I'm not sure if I'd call it professional, but it's more than a hobby. I like to think of it as indie.”

Medina: “I've been working on my own similar 2.5D platformer game on and off for several years as a hobby, and hope to one day be able to finish and release it. In fact, I used the basic code from my own game to speed up creation of this remake, and now I'll take what I've learned from this and apply it back to my own game. I don't think my skills are at a level where I could make a full game yet, and I've learned a lot by recreating real games, on a technical level, an artistic level, and a game design level.”

Thanks to Jeff and Robert for taking the time to chat with us! Now, here are more classic games being remade in new engines.

Tomb Raider 2: The Dagger of Xian 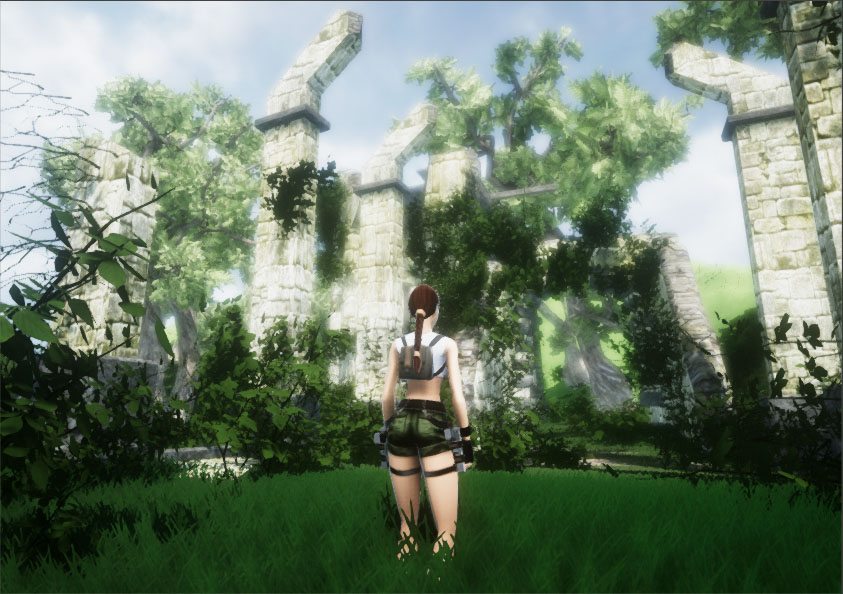 World class skills, I would pay to play this also, its brilliant.

Keep up the great work!

Make a remake of G-Police and I'll be able to die a happy man.

Dude, i'd even pay for this game!

Nice to see a proper Tomb Raider game, so much better than the reboot.