To the FCKN Moon! 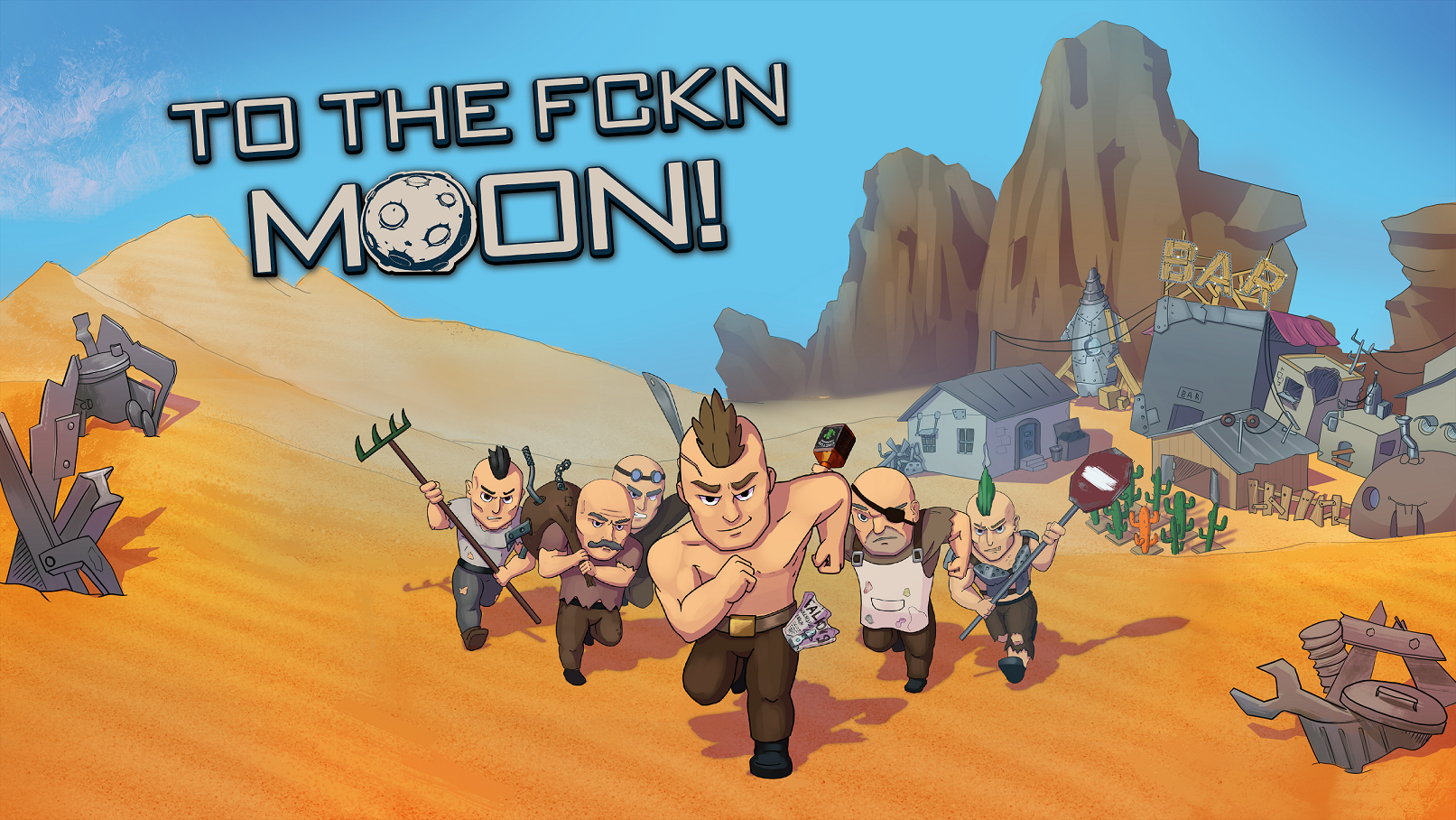 Something has clearly gone wrong in the world of tomorrow. No more Internet, hot water and central sewage system. The whole world became a fucking desert on the ruins of former civilization.

You are a tramp without name who was robbed and abandoned in the middle of deserted California. Wait a minute, maybe you're just in Kazakhstan? Or somewhere in Nigeria? Who the hell cares? Every place is equally bad now: only sand and stones around, constant lack of food and water, the sun ruthlessly fries blistered backs, the night cold chills clean through to the bones, and radioactive mutants try their best to grab your ass.

Is it any wonder that the locals are all angry and nervous assholes?

The guys who kicked your ass for some reason called you "Astroman". What did they mean by that? And how did this old piece of paper with something that looks like a spaceship get into your belongings?

Hm-m. Could it be some kind of a sign? What if normal people got out of here years ago to some place where it's not so hot? To a place where those assholes from the desert won't get them?!

That's right! After the big boom they probably all went to the MOON. And now they build the ideal society with unicorns, booze from lunar cacti and rays of pure joy.

That means there's only one way for you: get to the Moon! Build a ROCKET out of shit and bricks and fly to the fucking moon!

But this will certainly require some work.

According to TTFM ideology NPC and player characters are almost equal. Everything a player can do, NPC can do too. Just like the player they can change their reputations, use items from inventory, start gangs, build cities... The only difference lies in the roles — the player can choose what to do today: plant cacti, rob merchants or look for a rocket nozzle engineer.

NPC role shows what he or she is doing at the moment. NPC's character traits show what NPC really has a heart for.

Roles may vary depending on the situation.

For example, a NPC farmer with the "Crazy about working in dirt" trait can be recruited into a gang. If this happens, his role will change to Raider, but the character trait will remain the same. If one day a player decides to build his own settlement or just kicks the NPC out of the gang, most likely that ex-raider will hurry to the nearest town to settle down and become a farmer again... However, he will have a hard time if he has already earned a bad reputation as a raider.

Among the townspeople the most valuable and popular roles are Farmers and Trash Scavengers. They are the ones that work every day in sweat, filling the warehouses of the city with food and trash. Such work is routine, but someone has to do it, right? 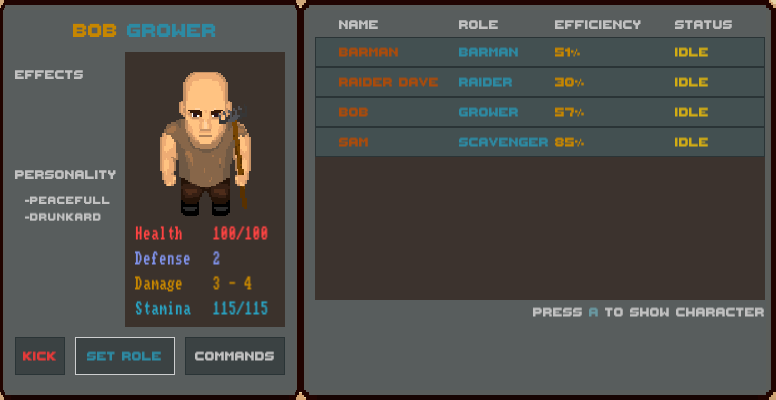 Reputations affect the relations between NPC and the player.

Local reputation can be gained by completing settlement quests and visiting the bartender to fill up the city warehouse.

Local reputation drops when character steals from city warehouse, attacks or threatens residents of the settlement.

Global reputation growth depends on specific interactions with NPC. For example, reputation among traders grows with the increase of your trading turnover. In other words, to get a reputation as a trader, you need to trade more often and for larger amounts.

Free lands of the World of Sand N Trash offer a system of continuous development of new settlements. Size and density of the settlement depend on the principles of local economy. There are no set rigid templates to determine the appearance of a settlement at different stages of its development. Each new settlement is in some way unique (although the damn bugs might produce the clone towns!) and depends on the ratio of three interrelated factors: "Food" and "Trash" resources on which the town grows and the number of residents busy with filling the town warehouses with those resources.

Each factor is limiting the others and together this system creates a fragile balance of what local NPCs call life. 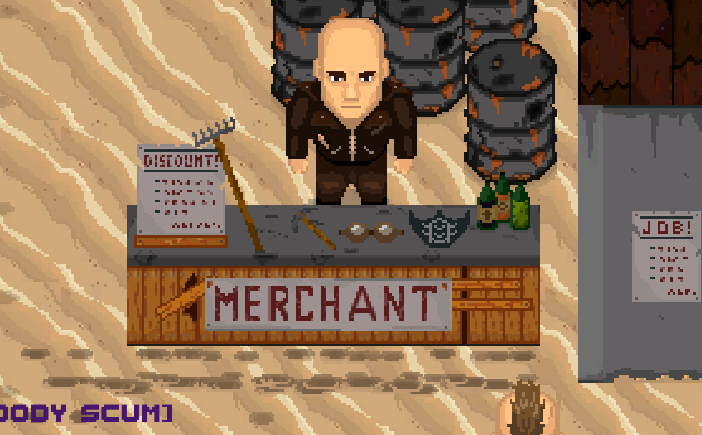 As the number of residents grows so does the physical size of the settlement (the number of barracks where NPCs sleep as well as the number of bars where they drink, etc). Over time, with the growth population, the town will start to attract merchants and local engineers and locals will open their own inn.

And most likely, soon gangs of raiders lusting for warehouses filled with trash and food will come here as well.

As the number of residents grows, the need for food increases. If residents lack food, they leave the settlement and start looking for a new place in the sun.

There are many reasons why the settlement may start lacking food: a small number of cacti seedbeds, raider attacks on farmers, a successful raid on the local warehouse.

The decay of the settlement is something that happens when there are not enough resources to keep NPC. If everything goes really bad and the last remaining residents are the bartender and the mayor, the settlement disappears (changes its state to "Abandoned"). In the future the buildings of this settlement may be taken up by other cities that have grown to its borders.

In addition to the settlements which continuously appear during the life cycle of the game world, there are unique story settlements generated at the start of the game. Such settlements "do not play by the rules": they cannot spontaneously get the "Abandoned" status and their economy is maintained artificially.

Just like any NPC, player can found a settlement.

It's really not hard to set a sign telling "This is my city!" on the land nobody owns. But maintenance of the settlement is a costly business that requires a lot of Trash.

As soon as a new settlement is founded the player can place primary buildings: resource warehouse, bar and mayor's house. The first ones to come to your bar will be desert tramps. They will occupy the bartender's position and become local drunkards (if you have enough food in the warehouse). 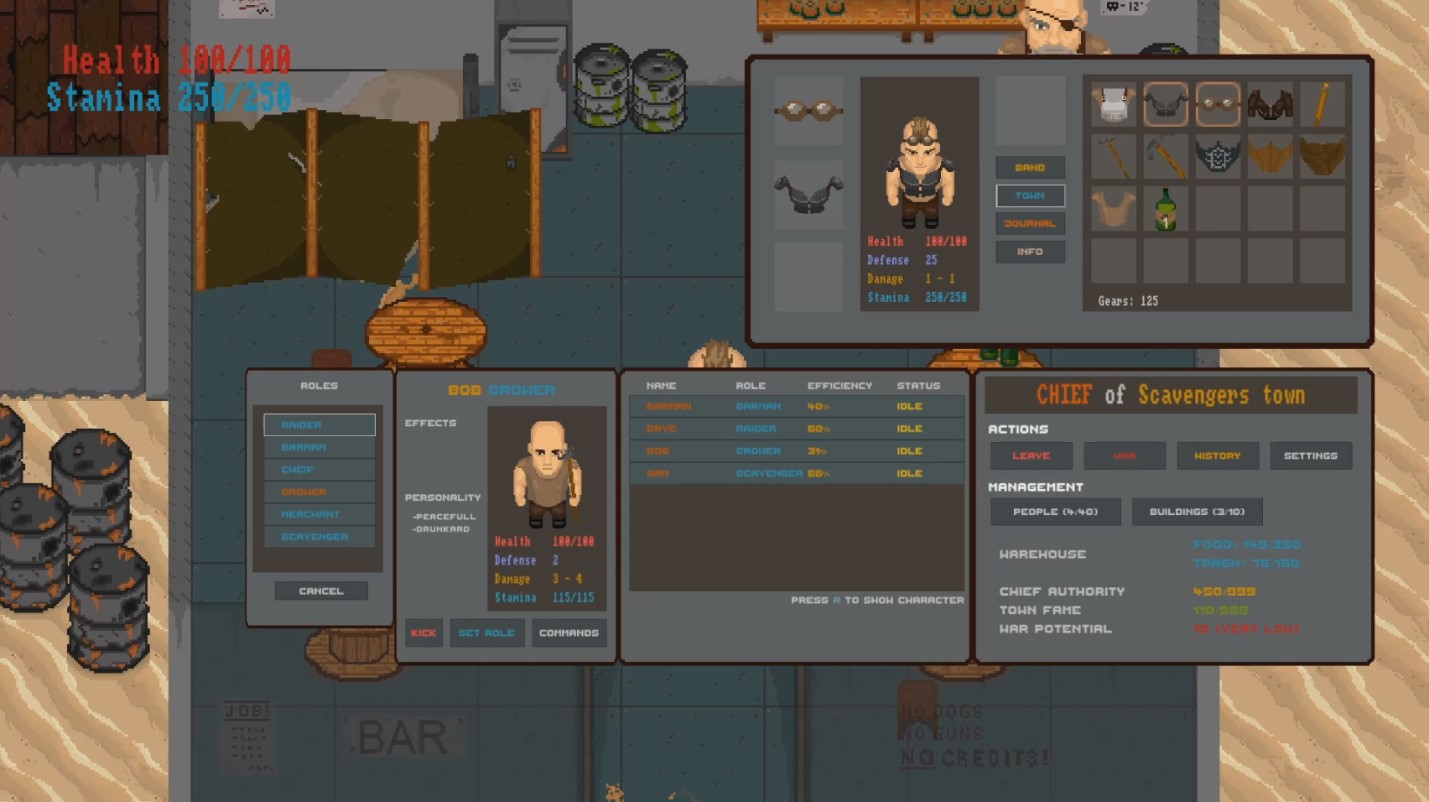 From now on, you can build barracks where your trash collectors and farmers will rest. After that you will be able to assign this tasks to poor tramps from among the drunks that throng your bar.

As your settlement grows (mostly in terms of population) other buildings become available, such as Rarities Dealer's Shop, Armourer Engineer and many others.

However, just like any other settlement, your town will become an attractive prize for local gangs of raiders. Expect their visit!

However, there is an alternative way. All useful resources you need can be TAKEN AWAY from other settlements and random wanderers! Nobody's stopping you from gathering a party of bar regulars and organizing a raid.

The most important thing to remember is that the locals not only work for the glory of the beloved mayor but also consume food (and booze!). If there isn't enough food the people will start a mass exodus and your settlement will soon become abandoned.

And one more thing: you can only have ONE settlement. By default all members of your gang are the residents of your settlement. Use this to "quick start" the settlement.

Getting tired of those petty cares? You can always give up your mayor status. Nature abhors a vacuum. But you won't be able to get your rights back so easily.

The World of Sand N Trash is a very dangerous place. It is not safe or profitable to travel alone here. People gather in gangs of raiders forming groups of two to several dozens of NPCs (depending on the reputation of the gang leader). The main purpose of the gang is to rob lonely NPCs and to raid settlements.

A gang of NPC forms when several raiders with the character trait "Inclined to gangs" meet. NPC with the highest reputation among the raiders becomes leader of the new gang. The reputation of the leader also determines the number of gang members. If the gang accepts a new member which has higher reputation than the current leader, the newcomer takes over the reins of power. The gang always follows the leader and leader's AI defines the current goals of the gang.

The main scenario of the NPC gang behavior is roaming around the map searching for source of profit: settlements or lonely NPC collectors.

A weak gang will never attack a strong settlement or NPC. The decision to attack is made after evaluating the ratio of the power of the gang and the power of the settlement (NPC). The power is calculated depending on the attack potential of all gang members (or settlement residents).

The main target during the raid on the settlement is always the Warehouse. The leader loots the warehouse while the rest of the gang protects him.

Reward is shared between gang members.

The player can start his own gang and recruit nearly all NPCs in the game world. The success of the recruitment depends on the target reputations sum ratio of the player and the NPC: it is easier to recruit a weak farmer than a hardened desert raider. 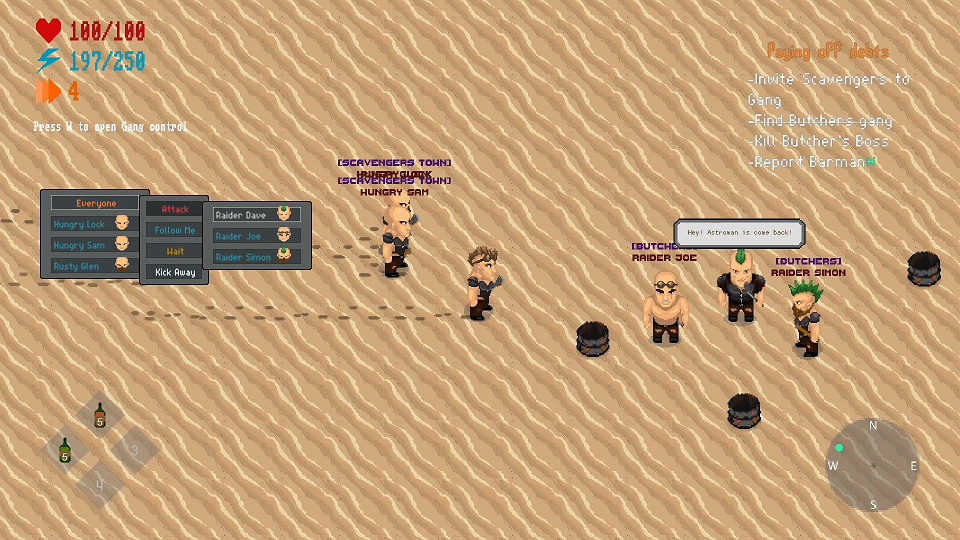 As in the case of the NPC gang, the reputation of the player among the raiders is a limiting factor for the number of gang members. The player defines the current goals of the gang using the gang management submenu.

In addition to that the player can:

NPCs may leave player's gang if the their loot share is too small.

To promote To the FCKN Moon! and grow its popularity (top games), use the embed code provided on your homepage, blog, forums and elsewhere you desire. Or try our widget.

Bigger in Texas is a single player western adventure for Windows, Mac, and Linux. We will be releasing the game through Steam! In the game, you are an...

The Assembly, a mysterious organisation hidden from the world, has been experimenting outside the constraints of government scrutiny and society’s morals...

Five Nights at Freddy’s VR: Help Wanted is a virtual reality experience for the HTC Vive and Oculus Rift. FNaF VR: HW is a collection of classic and...

Wild West Z - is the story of the Wild West, enslaved by a supernatural force and its monsters. Take part in gang warfare and battles with monsters on...

Fester Mudd: Curse of the Gold

Set in the Wild West, FESTER MUDD: CURSE OF THE GOLD is a three-part comic saga of exploration, reunion, and redemption… In Episode 1, Fester hits the...

Find your way" is a third-person shooter in a wild west setting. You are in the Sayver City. For many years this city was a calm place of wild west. But...