Time To Shoot is an arcade style isometric shooter featuring stages and modes that have been designed to be quick and fast paced. Take on the campaign stages to battle through hordes of enemies to get to your goal, go for the high score or take on a time trial. If you're not in the mood to navigate a map, then simply take on waves in survival mode. Or if you're up for a challenge then there will be a boss rush mode for that to. The campaign mode will feature large levels with optional side objectives, player unlocks and progression, collectibles, and multiple paths through the level. Watch this space for updates. A demo will be posted when available

This has been a long time coming, but I'm finally happy to upload a new gameplay video here. The gameplay shows areas from around the first level in the game, including a few of the new objective based events that have been added in. Other things covered in the footage include the new special attack, weapons drone, and other effects and visual upgrades since last time out. So without further delay, please enjoy the new gameplay!

Another big addition I am happy to reveal is the new logo for Time To Shoot! The new logo fits the style and theme of the game perfectly, this was fantastic work by Paul Boal. So massive thanks there, as this will allow me to really get awareness of the game out there.

Since my last update here there have been several major updates to the gameplay, to many to outline in full detail, so I'll try to give a quick summary of the key ones.

The players special attack has gone through an upgrade, as you make kills you can charge the special, when ready you will have the option of throwing a flare to signal in a large dropship which will rain down a very lethal missile barrage from the skies above! (pictured below). This is the first of many planned specials which will be unlocked through a progression system. 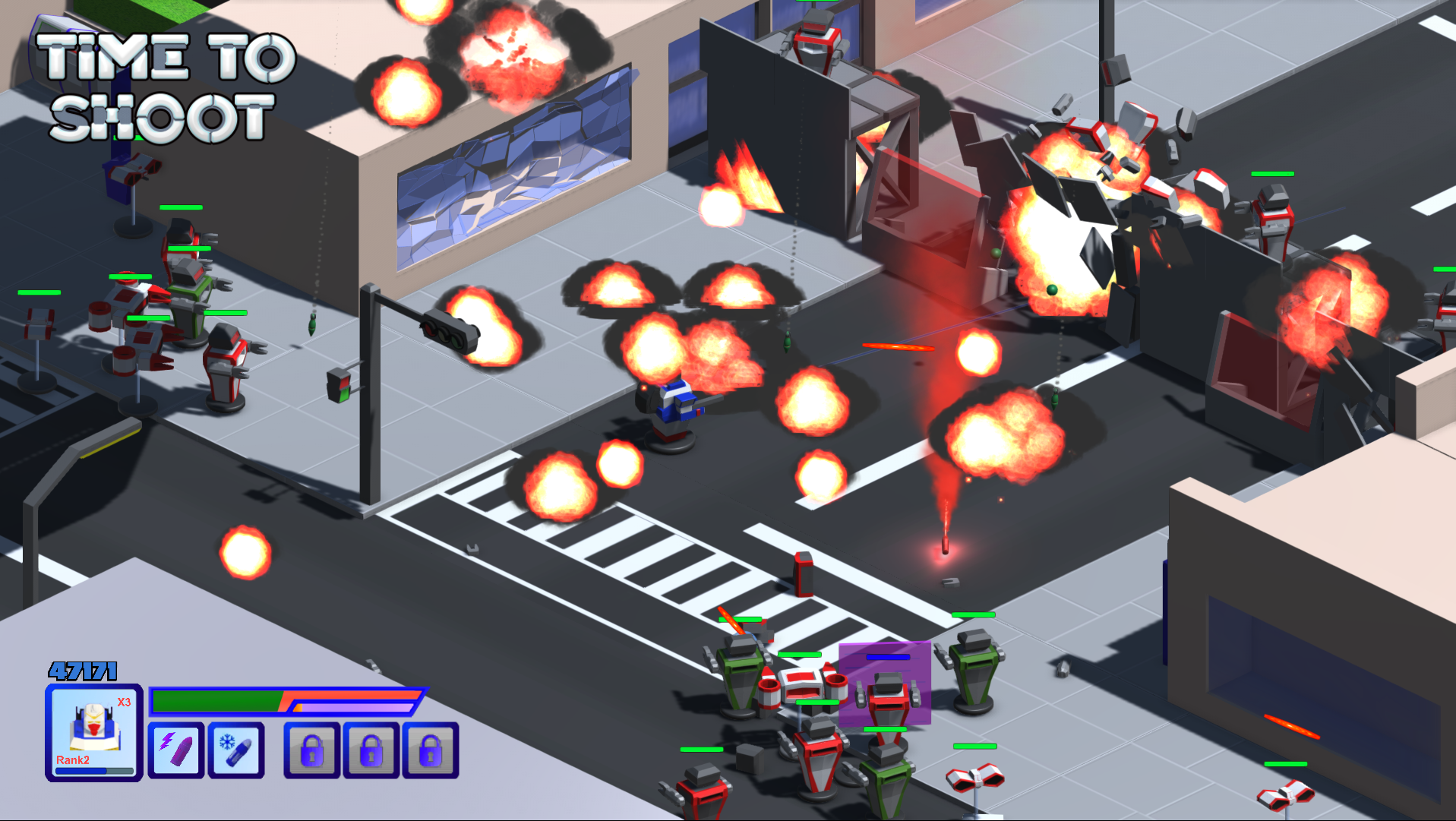 A while ago I briefly mentioned the experimentation of all heavy weapons being handled by a drone that would accompany the player. After many refinements to it's movement and aiming this mechanic is now ready for the game. The players heavy weapon drone will offer 3 attacks, in the gameplay video, these are a single missile, very high damage directed missile salvo (Below), and a scatter missle for area damage. There will be plenty of other weapon types on it (beams for example), and upgrading the drone will be just as important as upgrading the player! 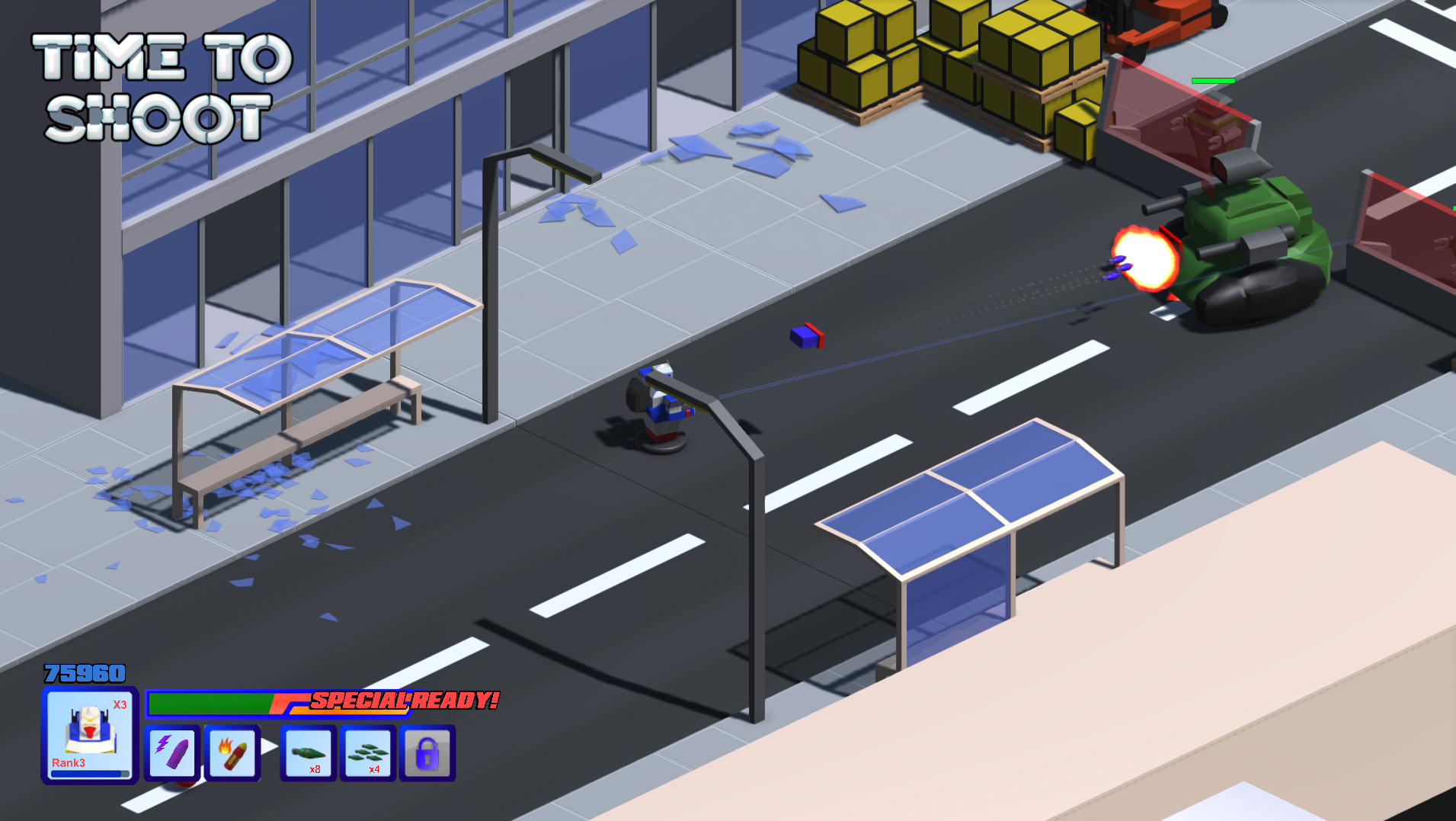 A big level redesign is underway, making each stage larger than previously, and with multiple routes and hidden areas. In addition the format has changed for a bit more variety, previously from the start of a stage there was one objective to complete and finish the level. In the new format each stage will have a main objective, side missions and some minor events.

The first level for example features 2 main objectives required to progress through the stage, two optional side missions which give the player an unlock, and 2 optional minor events which will provide the player with a small perk helping in the long term.

In order to free up screen space the mini map / radar was removed a while ago, and now the objectives can be tracked via a button press which will send a trail from the player to the nearest objective. 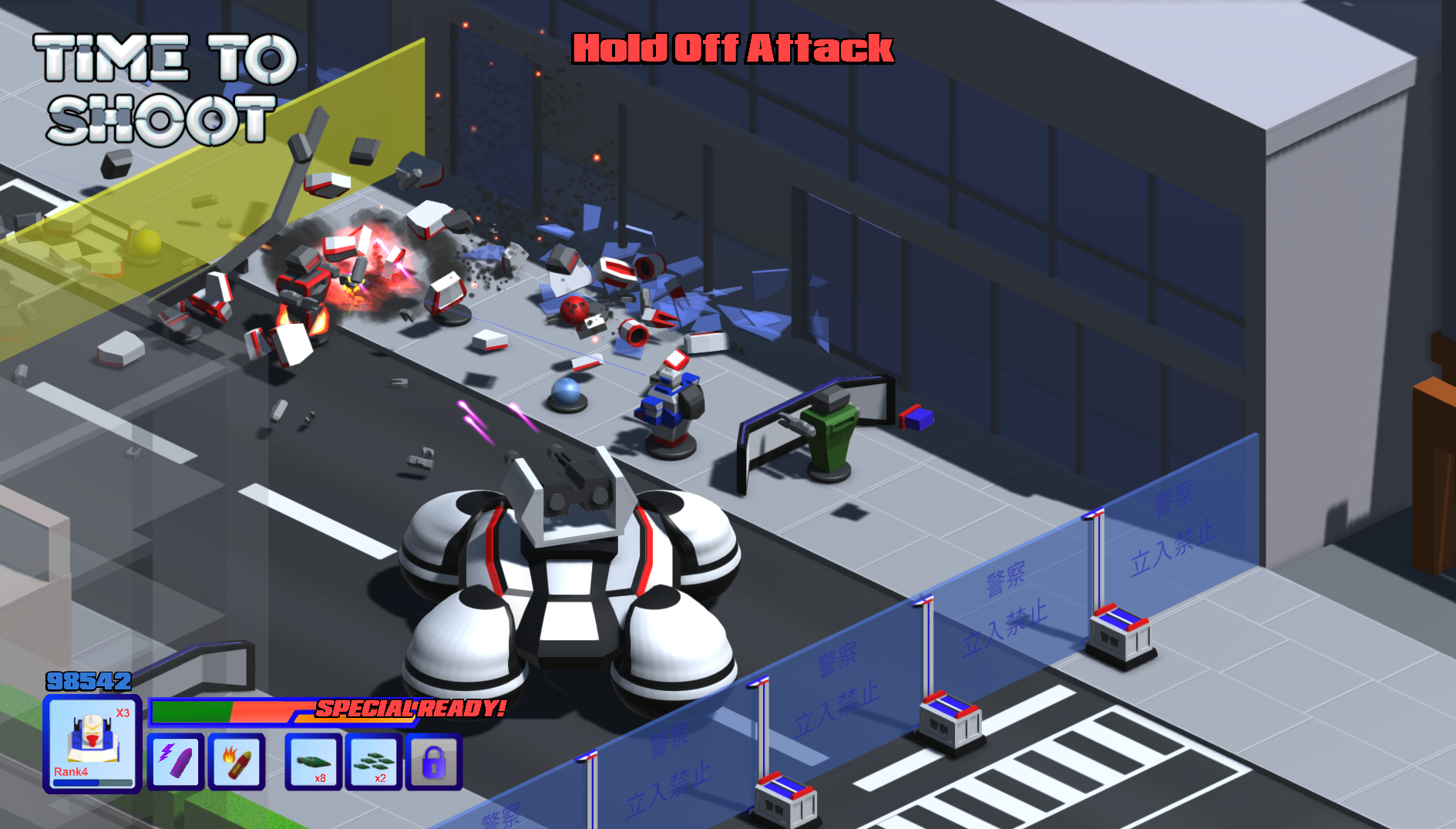 This is an ongoing area of development as having good AI is key to making the game more fun and challenging for the player. In the new gameplay footage all current enemy types feature at some stage, all of which have been upgraded. The basic melee drones focus more on closing in form all sides of the player, as do the explosive types which detonate on contact with the player.

The charge drone now adds knockback to the player, the small aerial drones circle the player while shooting making them harder to hit and their shots harder to dodge, they will also retreat if the player gets to near. The ranged enemy types have a slow firing but powerful hitting type, a standard medium fire medium damage weapon, and soon to be added a rapid or burst fire class. The enemy tank class now fires salvos of tracking missiles as well (below).

The spawn system has also been refined to improve balancing and spacing of the action through the stage. 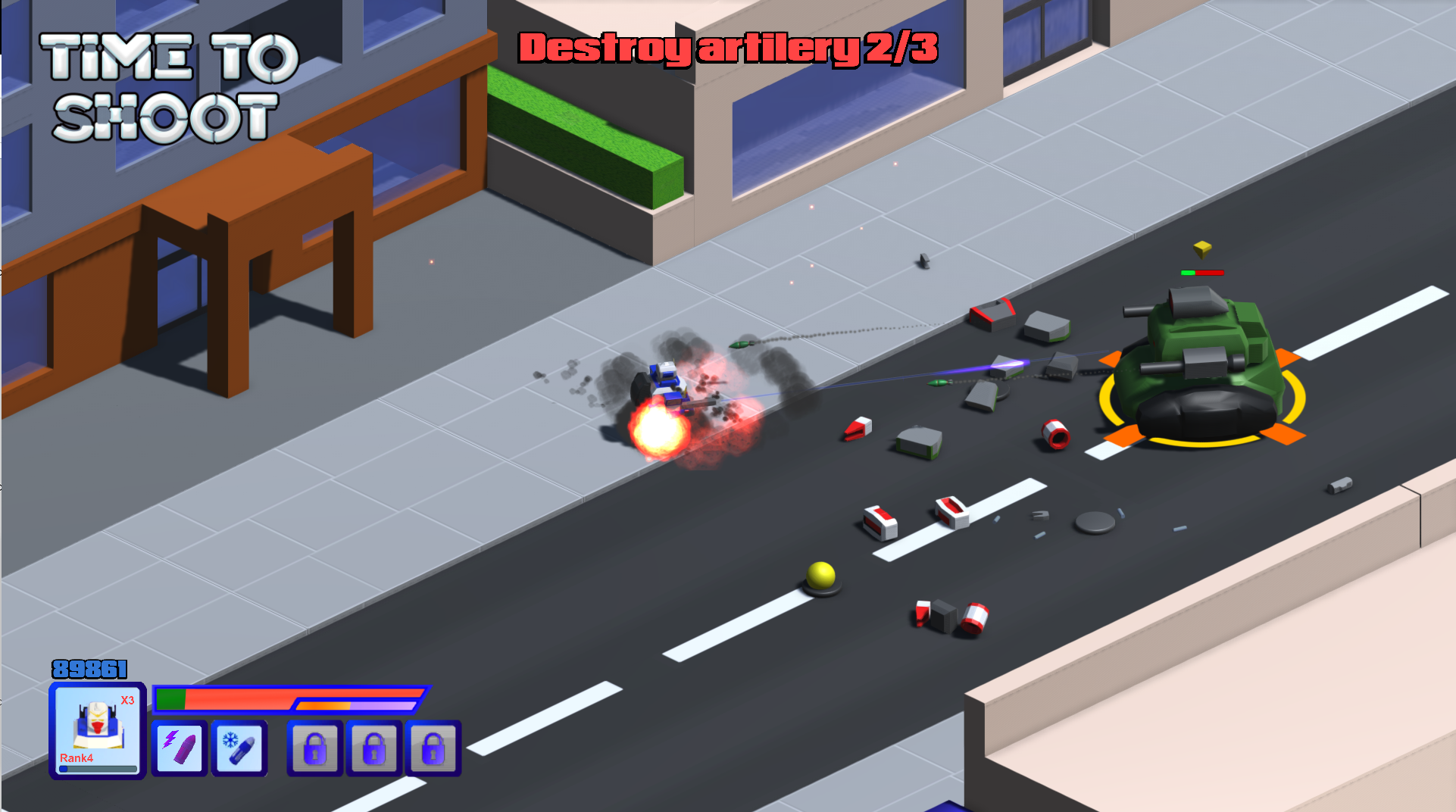 Although there are still models and items in the game that need updating, for example the enemy and player models. The game has gone through several updates, improving bullet effects, explosions, level items and the destruction on items. A few graphical enhancements have also been added, though are still in need of some adjustments.

A destructible environment has become a big part of the game, as such I have spent time adjusting the physics on destructible items to get them just right, even small things like the glass on the vending machine have been revamped just to give a nicer effect. Another minor, but fun touch is that items like falling lampposts or traffic lights will now damage enemies should they land on one, the damage won't be high, but could be enough to finish off an unsuspecting foe! 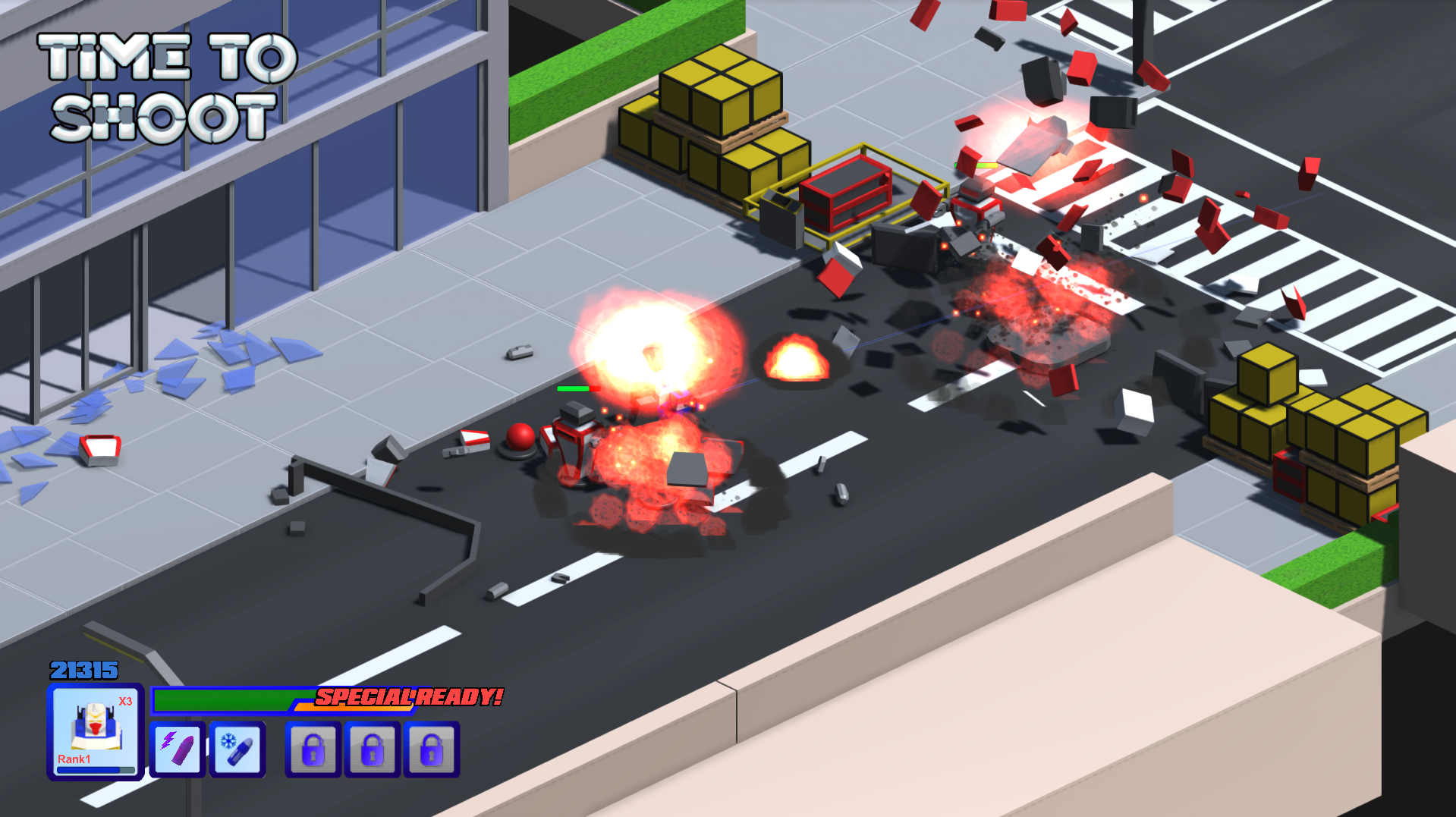 There is still, as always, much to be done on the game. Focus is currently on preparing a build for closed playtesting which will help me gain feedback on what people want in the game, and help me highlight key areas that need priority attention. Smaller elements such as GUI icons and text will be gradually updated, as with pickups and collectables etc. I am also hoping to spend time on the player unlock and progression system to determine the best route to handle upgrades and stats.

As always remember to follow the game here for updates, and follow on Twitter for the latest content and news on the game as it happens. I'm very active on there, so be sure to drop by and say hello.

I'll also leave you with an exciting teaser that local co-operative has briefly been looked at, and is possible it may be something seen in the game in the future.

Time To Shoot has undergone massive changes, in this article we will be talking a look at the new look and destructible environment.

Kicking off 2016 with being Greenlit! A great start to the year for the game, lots of gifs and content to show. GUI overhall, game website up, gun effects...

The biggest update this week is a player menu hub level in the works, a bit of bug fixing has been done, audio is being looked at, plus much more!

This looks like an interesting concept: Quick battles, and something to kill time with, waiting for the wife to finish getting ready? If you'd be interested in getting some feedback on the User Interface I'd love to help you out. You can find me on Twitter @Krixtoph, and if you want to get serious about opening a business I can help with that too: aiconsultants.net.

Thanks I'll keep that in mind when I come to it.

Explottens: The time is meow! Arcade

Don't Get a Virus Arcade