The True Slime King is a single player hardcore puzzle platformer with a focus on tight controls, challenging maneuvers, and mind-bending puzzles. All of this is achieved with just three buttons: left, right, and jump. Use your sliminess to stick to walls and cling to ceilings in order to avoid obstacles and reach hidden items. Whether you're a speed demon crushing records or you're just interested in progress through the story mode, one thing is guaranteed: you will die a lot in the process. But don't worry, you'll be respawned and back in the action just as fast as you can die.

This new update of The True Slime King not only makes the game more beautiful but also adds functionality to make the game more intuitive and fun to play.

The new Slime King update (v1.0.8) seeks to solve several of the design challenges that I'd been struggling with. Thanks to the feedback from players, I've been able to add new features and rework older systems to create a more intuitive and enjoyable experience.

The first thing I want to mention is that both the keys in the overworld and the bonus goo in the levels are now permanent unlocks (once you get them, you never have to get them again).

In the overworld, there is a bonus subzone within each of the five zones. Each bonus subzone has two bonus levels. Beating both bonus levels in the first four zones gives the player access to different colored keys. Beating both bonus levels in the last zone gives you access to a lock that requires these four keys to unlock. Previously, I was just using the colored keys (used in levels for puzzles) as the overworld keys. The way they were set up, you would have to get all of the keys and make it to the lock without dying once in order to be able to get through. This wasn't very realistic to expect the player to do considering the size of the overworld. So I updated the keys to be permanent unlocks, making the whole process of collecting these bonus keys more rewarding and straightforward. In order to convey to the player that these keys operate differently, I've also made some new sprites specifically for these overworld bonus keys. Here you can see the normal keys vs the new design for the overworld bonus keys. 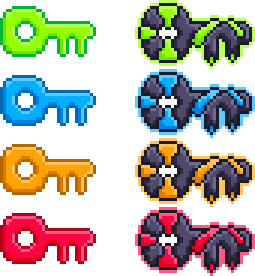 Here you can see the glow effect on the keys that, as with the bonus goo, makes them even more tempting to the player.

Since I updated the key sprites, I didn't want to just use the standard blocker walls for the lock like I was doing when I was using the normal keys. So I made a new sprite for the lock. Here you can see what the setup used to look for the lock vs how it looks now with the new lock. 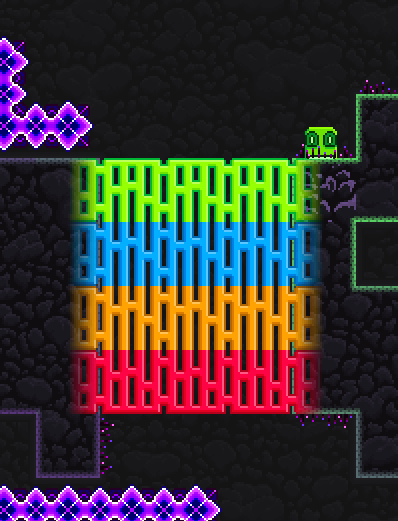 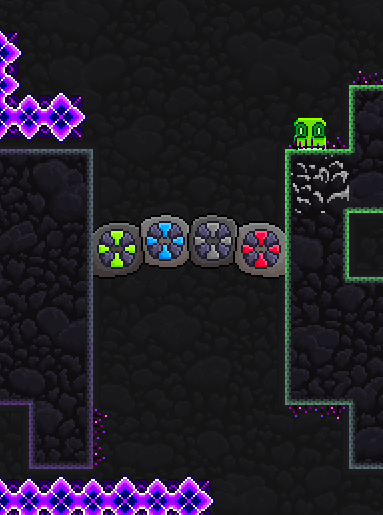 Something I've been meaning to implement for a while is a way to direct the player to new areas that they've unlocked without doing something like forcefully taking control of the camera. What I ended up doing was just putting a glow around the zone/subzone locks if they are unlocked and the player hasn't entered the next area yet. I really like how the effect turned out, and I think it does well to grab the player's attention.

I've been excited to release this update, since it comes with a bunch of nice graphical upgrades to make the game prettier. I also did my best to simplify design aspects of the game so that navigating through the game is easier on the player to allow the player to focus more of their energy on mastering the mechanics.