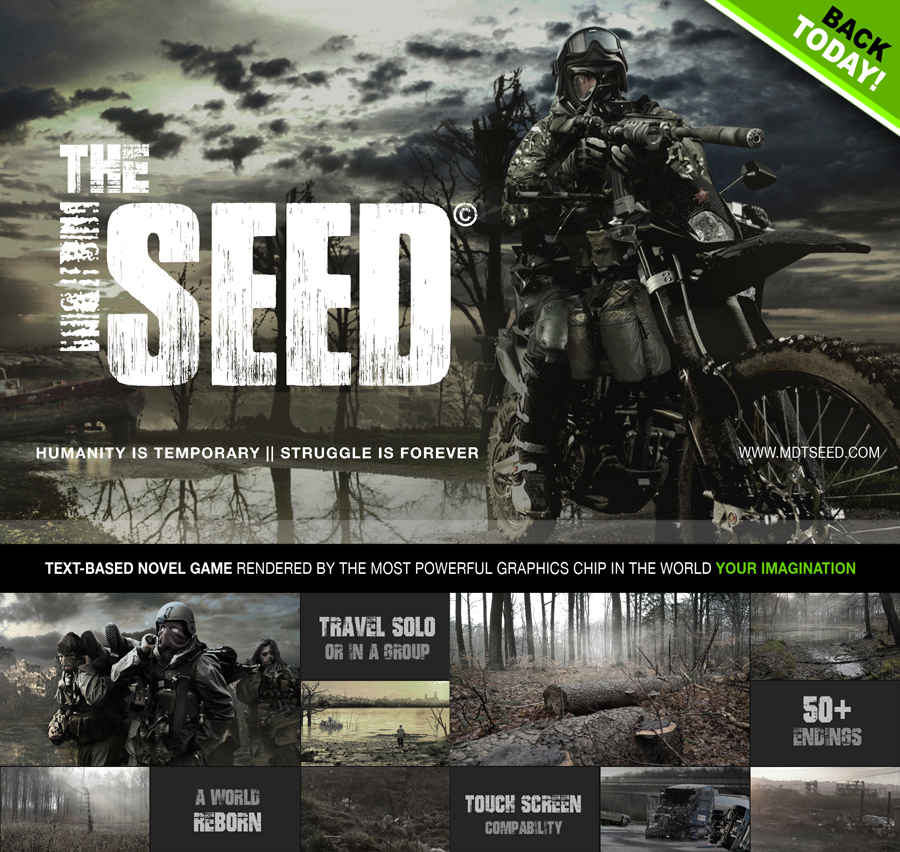 
The Seed is a single-player post-apocalyptic 2D novel game set in Russia, 2026. video game set in Eastern Europe, 2026. Single-player 2D interactive novel deeply rooted in psychology. Imagine you are one of the last surviving members of the human race. After all your family and friends were lost in the struggle with an invisible foe, it is solely up to you to slowly crawl back from the depths of hell, against all odds. In 2026, 11 years after the global apocalypse our Russian protagonist – played by you – is forced to abandon his underground shelter for the very first time after the disaster, beginning the journey that will change his life forever. Prepare for a world of pain and struggle in this single player story-driven interactive story game with rich plot branching and moral dilemmas. Let the plot unfold according to your mental focus and your survival priorities. 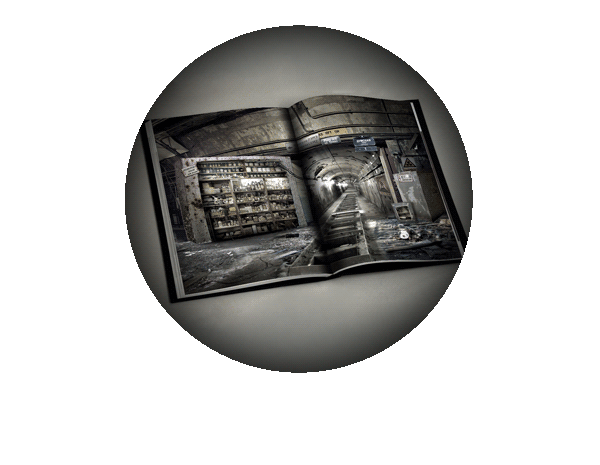 
The Seed is a modern approach to the classic genre of "Choose Your Own Adventure" gamebooks. As such, it’s a graphic, interactive novel where the choices you make have consequences for the plot branching and shape the world around you. Playing our game you’ll first and foremost have the impression that you’re reading an engrossing book, with lifelike characters, plausible story, complex lore and all other characteristics that define a solid reading experience. However, there will be a multitude of factors influencing your sensory perception like background ambience and dynamic illustrations. Moreover, every chapter will feature a unique concept artwork and you will also have a map and access to your inventory. The story will present you with moral dilemmas which you’ll be required to resolve based on your gear, social standing, health, location and survival situation.

All in all, it’s a new dimension of reading and a new type of book. Based on navigational decisions in your playthrough you will travel through a variety of post-apocalyptic locations such as dead forests, windy hills, abandoned homes, tunnels, bunkers, sewers, mines, ruins, improvised camps, ships, oil rigs, boats and many more. You play the role of the main character and set the course for his decisions, ethics and priorities. That is also why The Seed is written in first person, present tense to you let you feel that the story is reflecting your own current situation. The protagonist, as with any good novel, has his background pre-defined, but you are in control of his actions whenever an important plot anchor is generated. The engine will track and analyze your decisions and determine the plot based on what sort of character you are. For example, if you role play as a bandit disregarding any notions of morality, the story will reflect this and as a result can get incredibly dark and sinister. 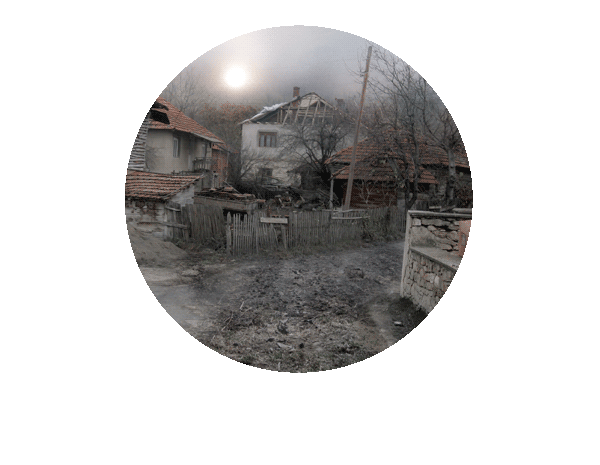 In August 2015 a series of chain effects trigger what is referred to simply as "The Event" that is a matter of days drives the humanity as we know it to the brink of extinction. The most powerful nations launch full scale nuclear and chemical attacks against one another in a misguided belief that they are the source of danger. They couldn't, however, have been more wrong. In 2026 the world as we knew it has ceased to exist. There was no one to witness its end because the end arrived when nobody expected it...


This series of occurrences known simply as "The Event" turned the world into ashes and wiped out almost all of humanity. Remaining survivors hide underground to protect themselves from the hostile environment that surrounds them. No electricity. No infrastructure. No means of transportation. No media. Scarce supplies, contaminated water and rotten food. Every minute is a struggle and those that live to see another day can consider themselves lucky. It's now more than a decade since The Event and groups of survivors can be seen returning to the surface. They want to learn what has become of it, to know if it’s already habitable, but most of all – they want to survive. Some are bent on finding their families and loved ones, wanting to retain their sense of morality, while others have reduced themselves to basic animal instincts.


“Humanism” no longer exists in its contemporary definition and must change its meaning to correspond to this unwelcoming world filled with sadness and devoid of all color. The remaining human population is now facing a new threat that is likely to consume the lives of every last survivor.


How can you make the earth fertile once again?
Can you direct the progress of humanity?
What will be YOUR destiny?


You play the role of the main character and set the course for his decisions, ethics and priorities. That is also why The Seed is written in first person, present tense to you let you feel that the story is reflecting your own current situation. 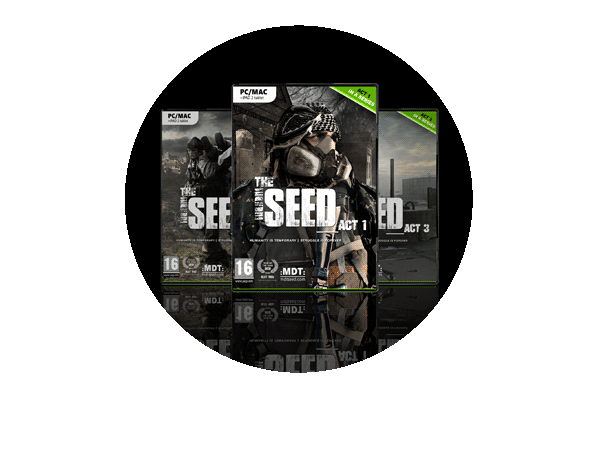 The hard facts about the game


As The Seed features drugs, intense violence, blood and gore, sexual content and strong language, it is expected to be assigned an ESRB rating of "M" for "Mature".

Interview: Going from FPS to a visual novel

Christof did his research well and with a deep insight and interest in this media it turned out to be an interview of a certain potency. Christof knows where we are coming from, what we already did, and now he wants to examine our future plans and ambitions. 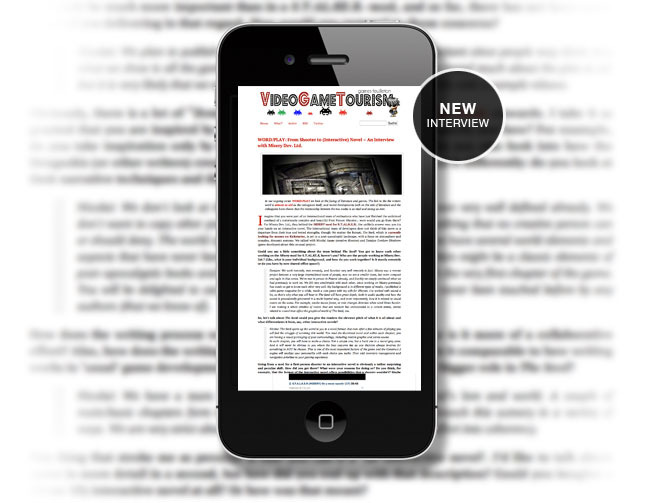 Be sure to drop a line or two about your thougts and impressions!

In celebration of Nicolai Aarøes birthday and a great campaign support the team has decided to unlock a sample of the SURVIVOR pledge reward for everyone...

Over the years and during our development of the S.T.A.L.K.E.R. MISERY mod we have shared many development details and backstage insight. Not only because...

Tyler Colp, the reporter at BitPulse, was the first to do an interview with Misery Development Ltd.

The Seed is live, it's backed and it's growing. Thank you everyone who have backed us so far!

just one question:
is that an fps game ?

I Can´t wait to play this!

would be great indeed! hope you guys get the deserved attention of people with this project! :D

Looking for a male voice actor (age 20-40) for a single task english text read-up. Message me if you could be this person.

Very interesting and original project. I already backed you on kickstarter and wish you succesful funding guys. I hope you will be able to achieve all the goals you appointed for this game. Good luck!

Thank you very much sir Lego!

Indie
Twitter
Tags
Embed Buttons
Link to The Seed by selecting a button and using the embed code provided more...

The Horizon of Stars Visual Novel