The Confines of the Crown

Madeleine Valois is a prince's companion. Her job is to guide and advise him, to make him look good so that he can land a royal bride. It is her responsibility to keep him out of trouble - not to let him walk blindly into a political minefield, not to let him get arrested for a crime he didn't commit, and definitely not to let him fall in love with her. Unfortunately, events are not going according to plan...

Thanks for voting and helping The Confines of the Crown on it's quest to become the 2022 Indie of the Year. You are now in with a chance to score some free games. Help this game secure more votes by embedding the widget (or link) we have included below on your favorite sites.

Whoops, forgot to update this with the news! Earlier this year, we unveiled a new version of The Royal Trap, now at 1400x900 resolution, with totally new background artwork: The plot itself is largely unchanged. You are Madeleine Valois, the trusted assistant of Prince Oscar, sneaking and spying and occasionally fighting with daggers to help advance his interests. It is, after all, your job to boost his status and help him marry a princess. Even if Oscar sometimes has other ideas. 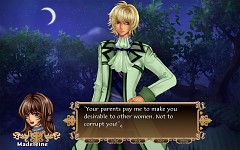 There have been a few alterations to the game. In the new version, Callum's route is not available on a first playthrough. You must complete one of the other endings first. This was done for two reasons - one, because Callum's route has so many revelations about the overall plot that it really spoils the enjoyment to play it first, and two, because players who were focusing on solving the mystery above all else were sometimes surprised to find themselves in a relationship with Callum by accident! So now the game will gently nudge you in other directions, and save Callum's story for when you're actually looking for it. 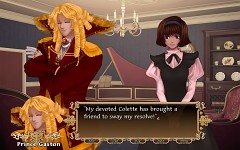 Don't neglect the other princes! They have valuable secrets to learn, as well.

The new version of the game is available for purchase on Steam and on hanakogames. If you previously purchased the older version, you can request a download of the new installer or a Steam key as you prefer.

And if you haven't played before, now is a good time to start...

Which is more dangerous, the traps set by royalty, or the trap of being royalty?

The Trap has been sprung!

Newly released and available for download on PC, Macintosh, and Linux. Watch the trailer within.

Caught in a Trap

Skirts, swords, and gunpowder - oh my! An introduction to the style and setting.

Indie
Tags
Embed Buttons
Link to The Confines of the Crown by selecting a button and using the embed code provided more...

Echoes of the Fey: The Last Sacrament Visual Novel