Introduction
I'm Jeffrey Nordin and over the past year I made this game, The Logomancer. I've always wanted to make video games, so I finally decided to do it. I quit my job and moved to Seattle after completing the game in the hopes that it can be used as a resume to get me a job in game development. The Logomancer ended up being very a personal story and a lot of my own neuroses, insecurities, hopes, and philosophies are in the game. Write what you know, as they say.

The game should take around 10 hours to complete.

Game Overview and Plot Outline
The Logomancer is a JRPG without killing. Conflicts are resolved through argumentation, logical discourse and persuasive speech. Mastering the elements of rhetoric will allow you to make your point to even the most stubborn audience. The people you meet are your 'weapons' and the skills they teach your 'magic'. Why not befriend an old editor and learn about the power of Proofreading? Or assist a schizophasic blacksmith to learn how to Doublespeak?

Using the classical elements of persuasion, social interactions become rhetorical battles. A 'boss fight' could just be trying to convince a store owner to give you a new suit free of charge. This means that stats like 'persuasion', 'confidence', and 'elocution' are much more important than 'strength', 'dexterity', or 'magic attack'. If you've ever wanted to play a Final Fantasy 6-styled JRPG wherein you could improve your characters' Perspicacity, then this game is probably for you.

Influences
The Logomancer draws inspiration from the following sources, so if any of these pique your interest, there's a good chance there's something for you in this game: The Lost Room, Inception, Dark Souls, Final Fantasy 6, Persona 4, House of Leaves, Silent Hill 2, and the music of two DTs - Dream Theater and Dark Tranquillity.

Pay-What-You-Want Soundtrack Download
Visit the Logomancer Official Soundtrack Bandcamp page in order to download the game's soundtrack. The soundtrack is pay-what-you-want, which means you can get it for free, but paying more than zero is always appreciated!

On August 4th, 2015, the Logomancer was released on Steam!

The game is available here: Store.steampowered.com

In addition to the game, I also wrote a complete strategy guide for the game which is available for free here: Thelogomancer.com

There were a vast number of improvements and bug fixes since the first publicly available version of the game. Here's the list of bug fixes and balance changes if you're interested (if you haven't played the game this does contain light spoilers):

- Losing to Narroden now increases regret as intended
- fixed platinum ring quest (quest 9) repeatedly activating if talking to man
- added ! (quest marker) over Glenton after completing first quest to let player's know another quest is available
- added ! (quest marker) over Ordolus man during the ring quest (quest 9)
- new cut scene on Forgotten Plantation 1F that draws attention to the stone column that can be used as a ladder
- added a new graphic for Ordul's claw after the Prismatic Claw is taken from it
- added in 4 repetition limit for taking 250 gold from Green merchant in Bazaar
- added extra dialog with Sudi about purchasing the Expert's Guide to Grilling if the player sells the platinum ring from quest 9, thus bypassing the book reward
- added blocking tiles to the edges of the entrance to Udumo's house
- fixed hint image to show 1,075 instead of erroneous 1,098
- added indication of number of grammar errors left in Sindarin's quest
- fixed black screen if you leave during a fadeout on 4F Winthgraden Tower as Cynthia leaves the paraty
- fixed issue where it was possible to permanently lose Cynthia if returning to 4F on Winthgraden Tower after completing quest 5
- fixed ability to get extremely high stats by using inspiration points while buffed
- fixed Completion menu to accurately reflect completion percentage
- fixed dashing input in Comfortable Routine to work with 360 controller and keyboard
- added extra confirmation window before starting the descent into the abyss below Epherus' house since you can't leave until the quest is completed
- fixed tile in Aspect of Blood where the player could stand inside the wall
- added sparkle over journal near Nicolai's bed that disappears after the journal is read
- added +10 Persuasion to Heraldic Top Hat
- increased Ordul Trillby price to 100 gold
- added in store discount for Johan after talking to him about his family history
- removed ability to sell hats, suits, clothing etc. at stores
- added extra dialog to cut scene that starts Soldier's Heirloom quest that takes into account if you've been to the Seaside Bazaar already in a previous quest
- raised cost of Ad Hominem to 150 EP from 80 EP
- added Eistancian Soldier and Eistancian Crest automatically to Research Journal after Soldier's Heirloom quest
- reduced number of turns self-loathing state lasts from 5 down to 2
- fixed being able to talk to the New Cadence giant too early
- increased the EP cost of Choropleth Survey from 60 to 120
- fixed bug where deciding to leave New Cadence after completing 9 quests does not take the player directly to Camp Courtesy
- Fixed the transparency on the eyes of greed and despair inside the Aspect of Blood
- Added scene to revert characters to normal if they use the Orb of Recall to exit the Mindscape as 8-bit characters
- Can no longer use the Orb of Recall unless all 3 party members are present
- Increased damage of Left Eye of Greed to 500 WP to all party members
- Updated Game Over screen to mention the eyes of Greed and Despair
- Added an extra line when discovering the tape recorder reminding the party to visit Will if the party has already spoken with him following the Fill in the Blank quest
- Fixed issue where the party could leave Room 202 before starting the tape recorder scene
- Fixed issue where the party could break the cinematic in Room 202 by using the Orb of Recall
- Added condition to the Orb of Recall, now requires 9 quests to be completed before using
- Added hint to get the Mantra of Binding if it isn't in your inventory at the Fragment Core
- Added extra check to change party from 8-bit back to normal when examining the Fragment Core
- Added a White Raven student who pays 10 gold for each research level in Cynthia's journal (up to a maximum of 4,200 gold) that appears in the Water Spine Cavern Entrance after banishing the White Ravens from the bazaar
- Eventide Solais is now immune to Self-loathing and 90% resistant to Apathy
- Eventide Solais can now use Aggravating Fist (90%) or Onus Probandi (10%) in certain circumstances
- Tempetes Tuxedo stat gains boosted to +15 for PER, CON, ELO, RES and EP - WP gain remains the same
- Clarified sign clue in hat puzzle
- Vichyssoise removes the appropriate debuffs: incoherent and malaise
- Fixed issue where the wrong ending could trigger if leaving before finishing Seams of Reality quest
- Added 10x Convincing Smiles and Straight Answers to Mindscape Well area
- Ad Hominem now accurately counters WP Regen state
- Final Horizon now appears in the Aspect of Imprisonment after being defeated once and slowly gains resistance to Self-Loathing and Apathy the more times it is fought
- Beating a Watcher no longer underflows the Regret stat but resets it to 0 for all party members
- Fixed damage multiplier on Ardus' Flawless Deduction (raised from 3 to 5)
- Changed EP cost of Dissertation skill from 150 to 5
- 100% now possible for skill learning
- removed AP value on Null Hypothesis, Refocus, Sylogism, Morality Play, and Filibuster
- Fixed puzzle hint in Ending BG
- Cynthia now joins the party at Ardus' level
- Sindarin mentions reading for Sylvanne's part if Cynthia is not in the party for the Edited for Content quest finale
- made the ordolus almanac appear if quests completed is 3 or more instead of just 3
- fixed bug where you could get multiple Mantra of Binding items
- renamed gameover ogg file

The Logomancer's soundtrack is available now to download for free from Bandcamp.

This is the official release of the Logomancer. It runs on Windows and a wired 360 controller is recommended but not required. 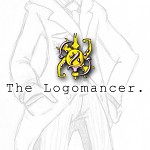 Tags
Embed Buttons
Link to The Logomancer by selecting a button and using the embed code provided more...