Our aim are long and rich multiplayer matches with a focus on great gameplay including...

What the game is about...

As you probably already know, we are trying to blend a few types of games into one. We like to describe it as a tactical shooter with survival and horror elements, that focuses on cooperative play via LAN or the Internet against a computer AI.

What we wanne do is, blend the atmosphere of a sophisticated survival game together with the concept of competitive matches. While everything is designed for great immersion and being able to loose yourself in the game's scenario, it also triggers a specific sense of urgency that drives you to get things done. Therefore a huge focus must lay on versatile and intense gameplay with a lot of pace changes.

But let's reveal a few more details, shall we?

it starts with you and your teammates crashing on an island during battle. The enemy's craft crashes as well, tho on the opposite side of the island, which is about 1-2km long. You quickly realize, noone will come for the rescue, so it's up to you and your team to gather all the necessary resources to build a boat, that would ship you to safety.

The resources on the island however are limited, with the most rare pieces to be found towards the middle between the two teams. You and your team will need to find the right balance between using resources to build protection for your camp and using resources for the boat. At the same time you will have to balance harvesting resources, keeping watch and attacking the enemy. And to make things worse, you and the opposing team are not alone on the island, at least during the nights.

These matches could take a couple of hours, depending on the settings for the particular match, which will allow to set the size of the boat you will need to escape (or in other words, amount of resources needed). That way, you can decide how long you want to play. At least in some way.

To sum it up, the game will consist of tactical combat. You will harvest resources all over the island, always trying to keep ahead of your opposing team. You will build protection and a boat, you will fight zombies, get lost on a huge island trying to find your teammates, run into the wrong camp by accident and, well stuff will happen. Also, there will be a few secrets on the island, some shock moments or a lot actually, but not too often, so you cannot really get used to them.

Anyway, I hope you like the idea as much as we do and we hope to hear you during some tests games.

Any questions? Let us know...

Thanks for voting and helping The Island - Ethereal on it's quest to become the 2021 Indie of the Year. You are now in with a chance to score some free games. Help this game secure more votes by embedding the widget (or link) we have included below on your favorite sites.

Disease On The Ocean

We have been greenlit! Thanks for all the ongoing support. Time to put some more work into the next test version. A few notes regarding the coming changes.

Now that the game has been greenlit, we are also working on the implementation of:

We are looking into the possibility to do the next pre-alpha testing via steam as well. The idea is, that we can send out codes to players on our pre-alpha test list. We are not sure how that works yet, but some research should clear that up :)

Here is my first screenshot with the Steam Overlay (no real implementation work done, other than initializing steamworks in the game) 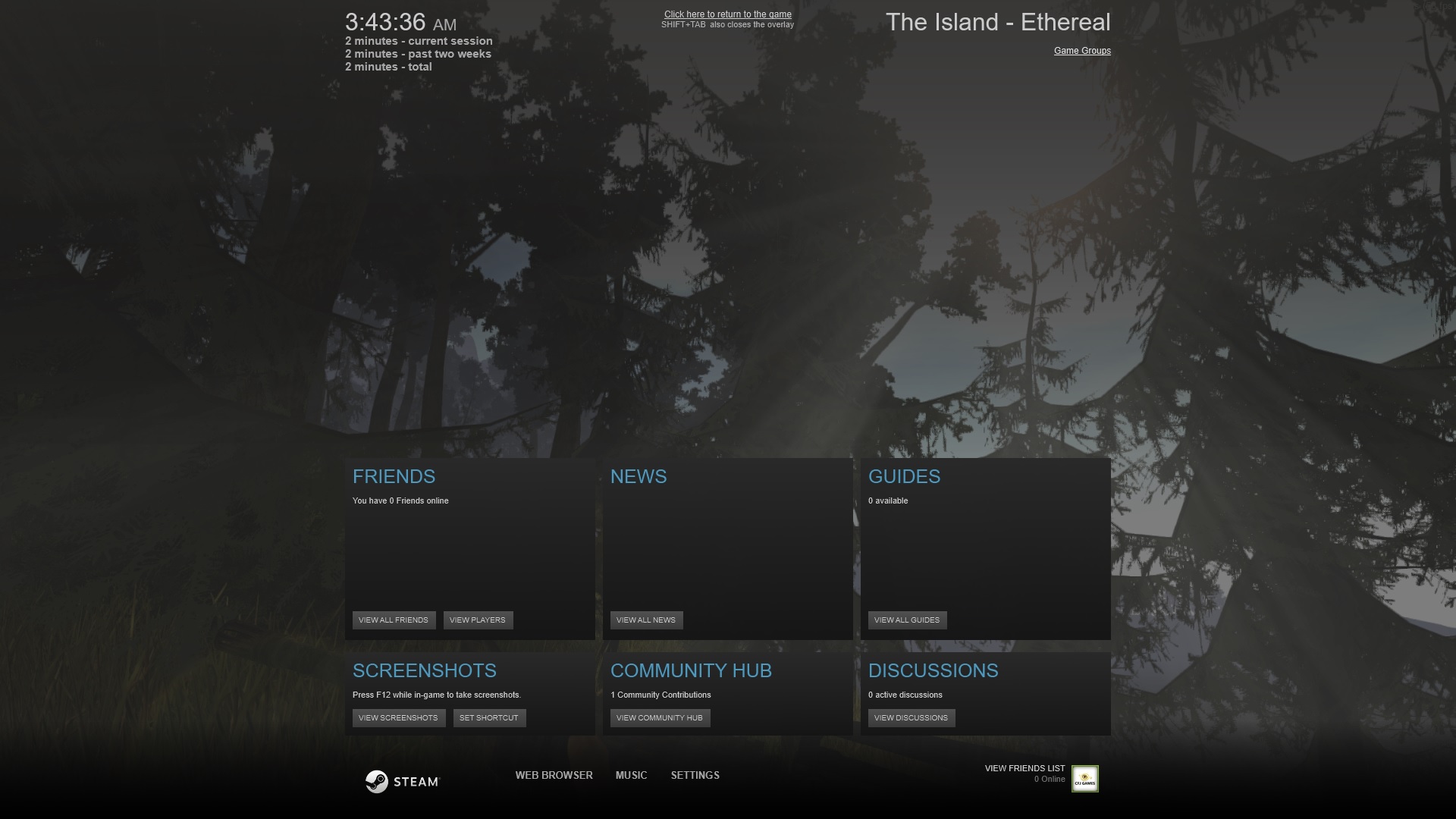 I will post my progress regarding the implementation alongside the usual updates from now on.

We are officially taking the next step on our development journey, showcasing our game on Steam Greenlight.

"I have been busy this week. Mainly focusing on details. I wanted to make sure, that anyone who played with us during the the pre-alpha testing, would...

I have been busy working in some of the feedback I received since the pre-alpha testing. Here are a couple of examples.

What are we working on? What can you expect next? Find out here...

Do you by any chance need any sound designers? I love what you have so far and would love to help!

Thanks for reaching out, I am already working with a sound designer tho. Hope
U will find a cool project!

Hello, how can I play your game ? Screenshots and Video monitored does not look bad , I hope you will answer me. And yes , I am Russian and I use Google translator.

Hey man, you can sign up for out pre-alpha test on our page:

We will be testing this Sunday! Once you signed up, you will receive all the info via mail and the game on Sunday.

Always! Thanks for asking. You can sign up here:

I am getting a version ready for some testing. I will send out infos to those on the list as soon as I get there.

A quick time-lapse showing off our day-night cycle. (Pre-Alpha Graphics)

A tactical coop shooter with strategy, survival and horror elements. Playable via LAN and the Internet.
Our aim are long and rich multiplayer matches with a focus on great gameplay including...

- Atmospheric surroundings
- Tactical and realistic combat
- Exploration, that rewards the player
- Sophisticated AI
Make sure to sign up for the alpha test!

Indie
Tags
Embed Buttons
Link to The Island - Ethereal by selecting a button and using the embed code provided more...

Disease On The Ocean Tactical Shooter