The Cleansing is a competitive real time tactic/strategy and RPG game, set in a feudal post apocalyptic environment. You choose which feudal house to support, take control of a party of heroes and go to battle. Raise your banner over captured territories to gain resources. Use the environment and positioning for tactical advantage and conquer the enemy in a fierce battle for survival and conquest.

Check out our greenlight page!
Steamcommunity.com

We, the creators behind The Cleansing, are an independent gaming company from Sweden founded by three persons with great experience within the software and gaming industry. Our ambition with The Cleansing has always been to make a strategic and competitive game. It's a kind of mix between the RTS genre and the RPG genre, where we don't see a lot of games today. We've been trying to create a world which reminds you of the dark ages, but takes place in a modern post apocalyptic time, where society has been more or less reset and rebuilt to a dark twisted version of its former self.

The game core is built around your five heroes, which have been picked before the game in the so called "Preplan" phase. When the game begins it's all about capturing and keeping control over the battlefield to gain resources, which can be used to upgrade your heroes with skills and equipment, buy support units and enhance your base.

There are five different classes and each class has two different specialization paths. You beat the other team by destroying their base(s).

We're aiming for an invite only alpha version within short, hopefully we can make it happen on Steam, thanks for your support!

The Cleansing, is a competitive, real time tactic/strategy and RPG game. Set in a feudal post apocalyptic world. You choose which feudal house to support and takes control of a party of heroes and goes to battle. Raise your banner over captured territories to gain resources. Use the environment and positioning for tactical advantage and conquer the enemy in a fierce battle for survival and conquest.

Inspired by the Swedish pen and paper RPG Mutant and tactical isometric shooters like the original Syndicate game, we have created a tactically challenging gameplay that gives the player many tools to use and a unique game experience.

- Gear up with your friends or alone against other players in a versus, RTS and RPG multiplayer

- Use the 3D environment to gain tactical advantage over your enemies

- Take control over resource areas to boost your economy

Years has passed since humanity almost perished. The apocalypse never finished the job. The period where survival was the focus for the remaining humans is over. What once was humanity has survived, although twisted by mutations and a harsh environment. Something that resembles societies has once again been established, with traces from the old world in them. The rational, solidarity human is not even a memory. Barbary is the new order and a dark age reigns...

Classes and their skills in The Cleansing

The heroes in The Cleansing are divided into five different classes. Each class has two different skill trees, we call them paths. Below we explain those briefly for you to get a grasp over what different roles a hero can have in our game. In addition to the skill system, a class can use different kinds of weapons which also will define the hero’s strengths and weaknesses. 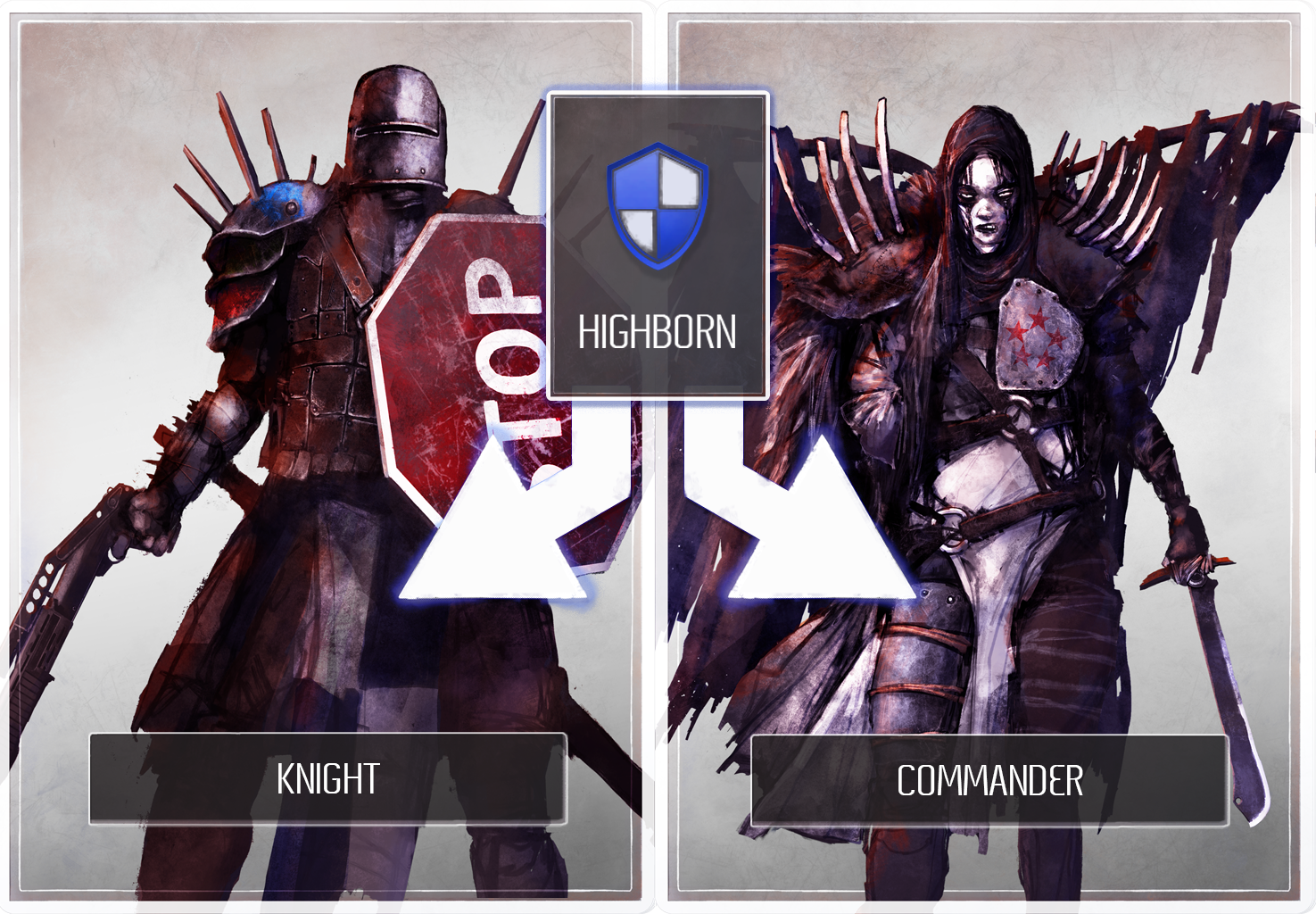 Highborns are the people with the power, they constitute the inner circle of a certain house. A house control land areas, have their own strongholds and hold the major political power in the world of The Cleansing. In combat, the Highborn class wants to be close to enemies to inflict damage, but can also function as a support unit for other classes. The Highborns are known for their physical appearance, therefore they can absorb a lot of damage on the battlefield.

COMMANDER
The Commander path will boost the Highborn’s support skills, which will buff fellow heroes nearby.
Skill example: Buff AOEs and healing aura 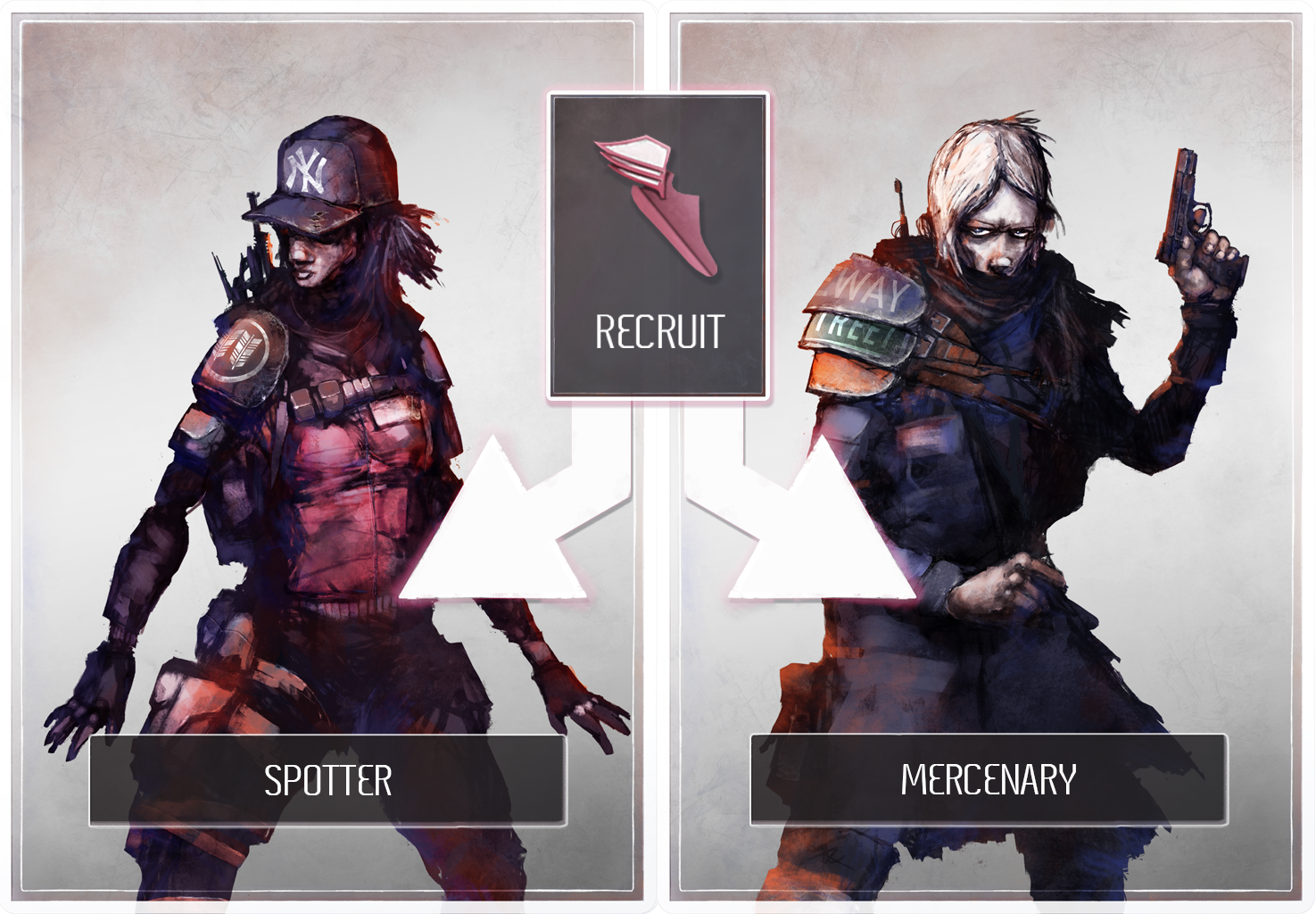 In the primitive cities live common people with no political power, they are called Recruits. They generally come from the major poor part of the population. They usually work for a house and in return the Recruits’ families are provided with shelter. Those who is involved in combat act as mercenaries and scouts.

The Recruits deal average damage at medium distance, they handle guns, assault rifles and are known to be swift in combat.

MERCENARY
The mercenary is the most general class in the deck. A combat unit that does average damage at medium range.
Skill examples: Covering fire and Explosive grenade

SPOTTER
The spotter is a recon unit that is essential for all who values knowledge before action.
Skill examples: Act as radar, Sniper com A group of people who once found the link to the old world. They found the knowledge that was carefully preserved from before the apocalypse. With old knowledge comes individual power, but it can also bring distrust amongst the others in the society. Brainers usually have positions as advisers to the rulers and therefore have indirect influence in the political life.

They act as medics or the technicians in combat. They try to avoid direct confrontation with enemies in combat (as much as possible), instead their way to achieve death and harm to opponents is by using science and intellect.

FIXER
The Fixer is a technician that deploys a number of gizmos that makes perfect support.
Skill example: Sentry gun and Sensor array

DOC
The Doc is on one hand a doctor, on the other hand a mad scientist.
Skill examples: Heal, Mind control 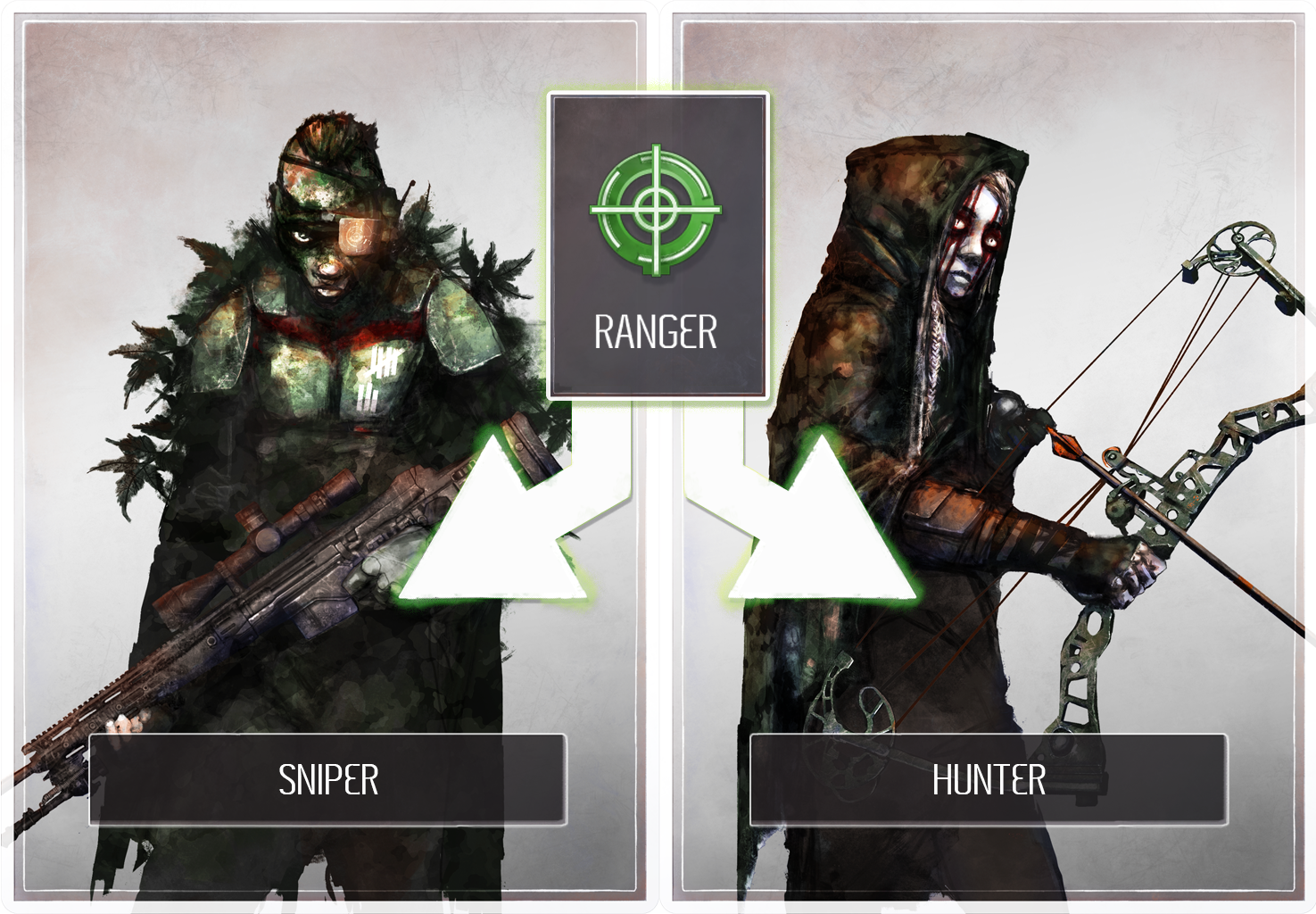 Outside the houses’ claimed territory lies villages with people making a living by hunting animals in the wilderness. Some of these villages have stronger connections to the houses than others. Their position in the political world is not strong, but at the same time not weak either, depending on their allegiance. The rangers are sharpshooters in combat and like to keep their distance to their enemies. Rangers with powerful long range sniper rifles, enjoy high status and are highly sought after in the battlefield.

HUNTER
The hunter is a master of traps. Trapping and using the bow will results in a lethal combination.
Skill examples: Beartrap and Nail

SNIPER
The sniper is the fear of all enemies outside a close range fight, the perfect unit as support to the front line fighters.
Skill examples: Scope master and Explosive bullets 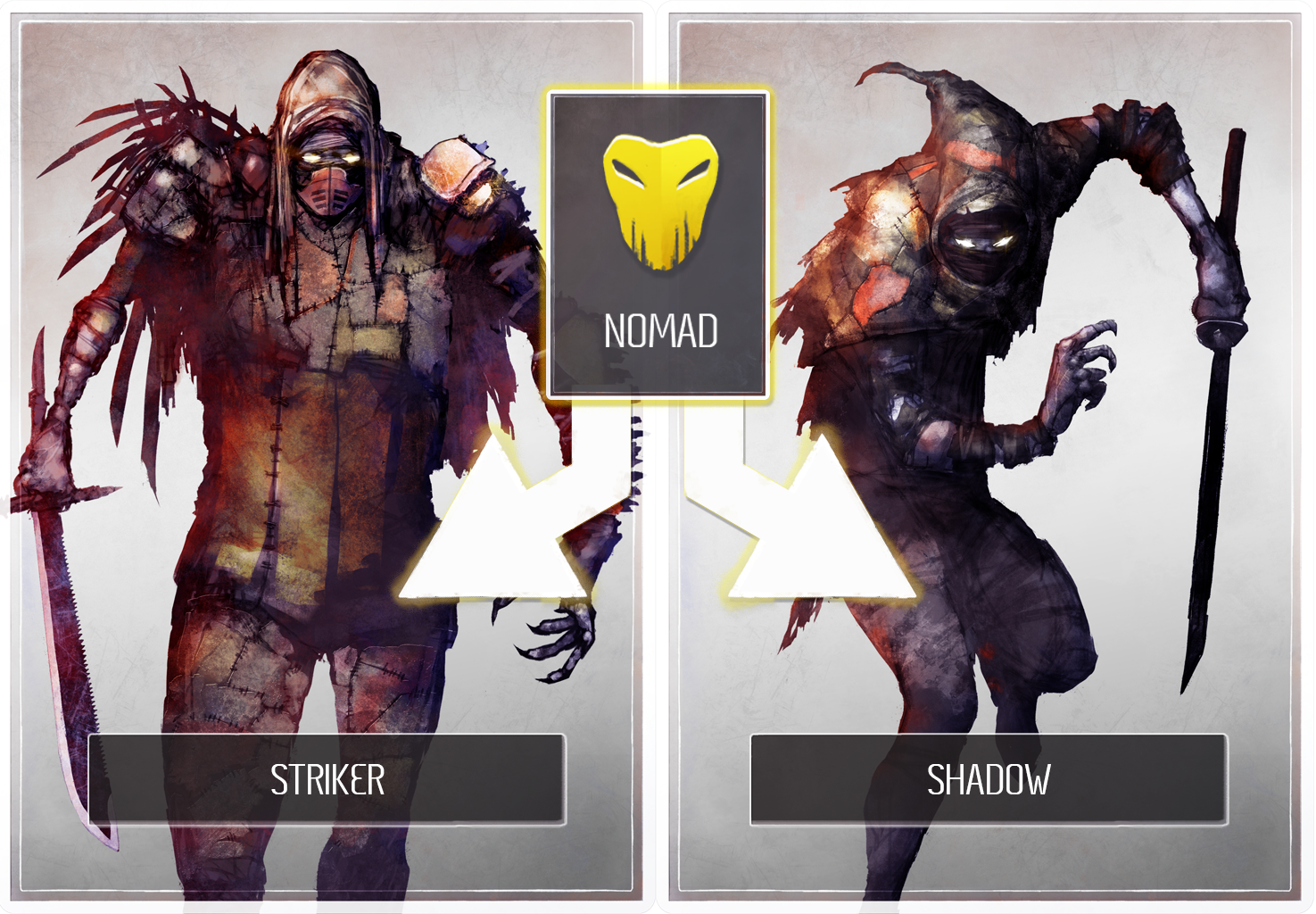 “The wanderers”, “outcasts”, “filth” - the people who belong to the Nomads go by many names. Some more diminishing than others. They have practically no influence in the political life (except as a deadly tool) and are hired to do the dirty work no one else wants to concern themselves with. Many Nomads carry nicknames due to their grave mutations. The mutations have lead to different animal characteristics that have been integrated into the Nomads.

In combat they lure in the shadows and do not hesitate to use foul methods to achieve their goals. In combat they can afflict high damage to their enemies, but on the downside, they are very vulnerable to counter attacks if not prepared.

Nomads are a close range melee class with high output damage on single targets. Their weakness comes with their bad physics.

STRIKER
A nomad that has survived into adulthood is a lethal being. The striker is a warrior folded by the harsh life of the nomads.
Skill examples: Flashbang and Slash

SHADOW
When it comes to planned assassinations, the shadow is generally the most potent killer for hire. Few know the methods they use, few have lived to tell..
Skill examples: Cloak and Stun 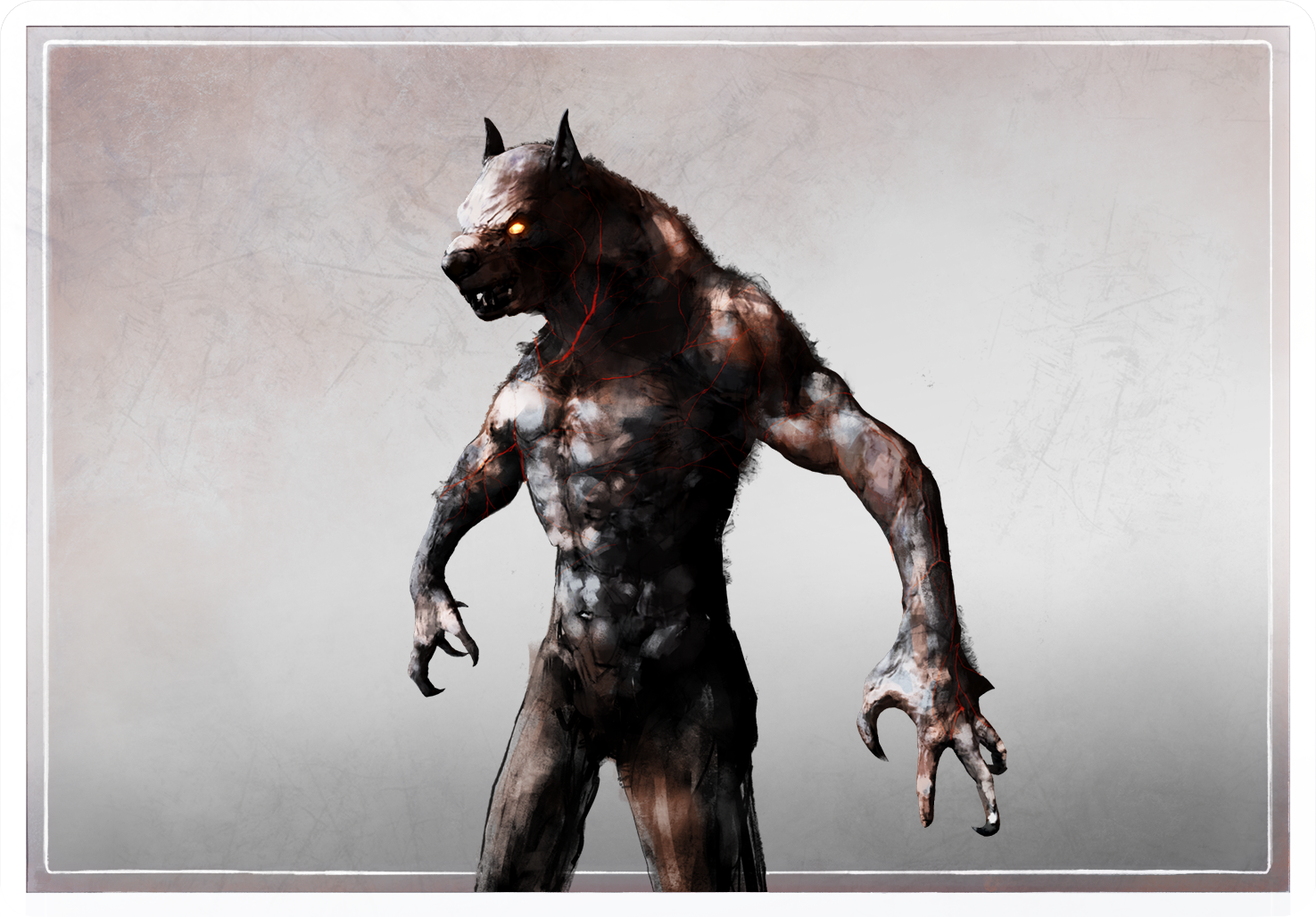 The bloodrunner is the less fortunate result of trying to play god. Twisted by mutations to the point where the human part is in a clear minority. The bloodrunner is not known for its intellect, but its vast numbers and ruthlessness on the battlefield.

Indie
Twitter
Tags
Embed Buttons
Link to The Cleansing by selecting a button and using the embed code provided more...