The Aquatic Adventure of the Last Human

The Aquatic Adventure of the Last Human is a metroid-vania styled action/adventure game where you play as the navigator of Argo 9, a spaceship/submarine hybrid, thrust back to Earth in a time after humans have gone extinct. Whereupon one will have to explore to uncover the reasons for humanity's downfall meanwhile encountering monstrous sea creatures.

The focus of this game lies in exploration, story and boss battles. It is up to the player to determine if the ruins of our species is a travesty or an inevitable conclusion.

Trailer music: "There Comes A Time" by The Honeydrips. Check him out on spotify or iTunes.

Check out our KICKSTARTER PAGE &

We tried to make the story as tangible and close to home as we could while still retaining the post-apocalyptic sci-fi feel to it. Defining themes for the game are : climate change and existential questions of our impact on Earth.

The story will mainly be told through the visuals and some extra information through holo-tapes, which is a form of semi-physical cloud information. Imagine it as fragments from an internet based consciousness. Since there are no humans to maintain any technology left the only things left working are automated machines that have stayed in power through the central power line that leads to the facility.

The background story of the world we have imagined is that the water rose by an unpredictable amount due to global warming. The sun started losing power and the Earth's surface froze over. Humans were forced to live underwater, where they could still harvest energy and grow food, changing how cities and districts looked. As resources began to dwindle in the year 2971, sub aquatic spaceships were sent to a nearby worm hole to look for habitable planets. Things did not go as planed.

Different areas will have distinctly different feelings to them, both the music and the natural environment is thoroughly thought through to fit the setting. We want to get the player to recognize different areas based on their appearance and atmosphere so that they can create a complete picture of the world we are creating. Just a few of the locations included:

Freedom of Exploration
What is a good adventure story without some exploration and discovery. In the spirit of classic metroid-vanias the game-world will open up as one unlocks new upgrades. There will be about 10 upgrades that can be found, for example:

Keeping it Simple
We wanted the weapons and tools to be concrete and definitive. They should feel intuitive and natural in their uses so that progression is not halted by overly complex mechanics.
The Harpoon will be you're primary method of causing harm. Get up close and personal; you can spam the spears. Stay back and out of danger; slow precise charged shots.

We decided early on that we wanted to exclusively make boss battles because we saw it as a great way to differentiate the exploration moments with the action moments. Only having bosses gives us a more focused goal on making them as fun and rewarding as possible. Right now there are 9 unique bosses each with different attacks and ways to kill them.

As one kills the fish and sea creatures a monster log is unlocked and the player will be able read about them and their story as well as see a more detailed picture of each boss.

System Requirements
OS: Windows 7 or newer
(Mac and Linux if we are funded)

Release Date
We really don't know exactly when it will be release since it depends if we will be funded or not. If we are funded we will have enough money to work on it for a bit longer which means a later release date. However, we are aiming for a release in the end of July.

Price
On steam it'll be around 7 USD but at the moment you can get it DRM free as a Kickstarter reward for about 5 USD.

Thanks for checking out this project.
Write to us if you have any questions :)

Check out our KICKSTARTER PAGE &

Expect A Demo & Thank You Poster

We just wanted to post a quick thank you for everybody that is supporting us. It's been a stressful couple of days and our Kickstarter is now at 33% ! We really need that extra push to make it the other 2/3 of the way. We would be so grateful if anybody who sees this could help back us if you think it seems like an interesting project or at least share it. We promise hard work and a fun experience.

This week, along with doing interviews and keeping the Kickstarter fire going we will make a demo where you'll be able to fight three of the bosses and see the start of the story. It will be more like an early alpha playthrough so if there are any bugs or issues please write to us at: ycjy@whycjwhy.com

We will put up the demo here on indiedb and possibly itch.io and GameJolt and Kickstarter.

This is the poster we'd love to print and give out at festivals, however we don't have the money to do that at the moment. Check out the kickstarter. We will send a high-rez version of it with every purchase. 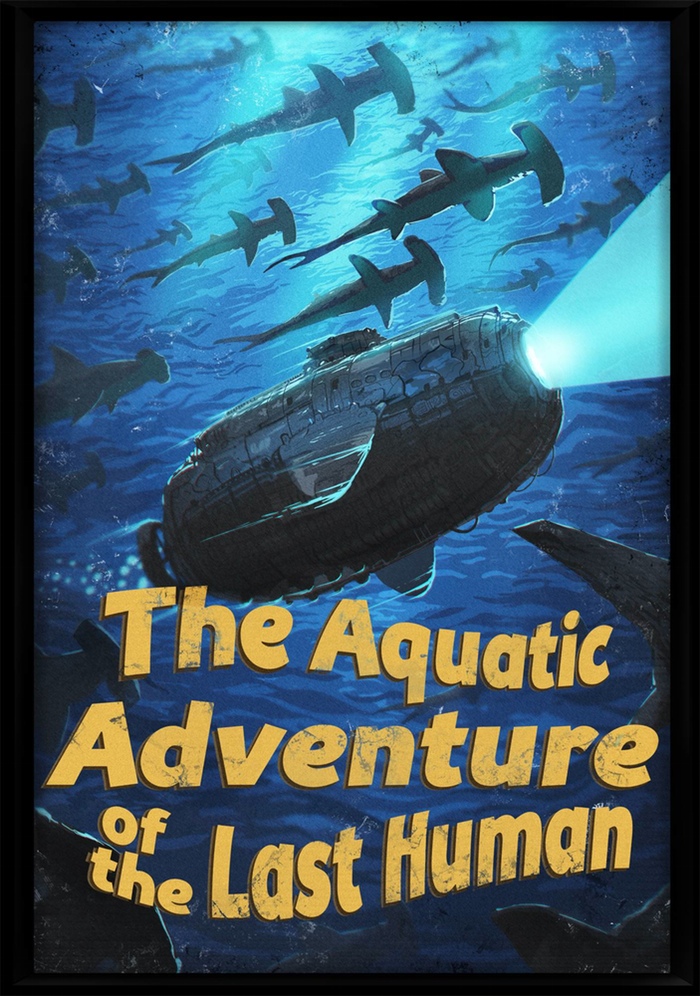 We have launched a Kickstarter and a STEAM Greenlight campaign for The Aquatic Adventure of the Last Human! Check out our animated pixel video!

The Aquatic Adventure of the Last Human Alpha-Demo

A pixelated side-scrolling action adventure about exploring the decaying ruins of our species and fighting deadly sea-creatures in search of answers...

Indie
Twitter
Tags
Embed Buttons
Link to The Aquatic Adventure of the Last Human by selecting a button and using the embed code provided more...