Power struggle in the Middle East? Not a problem! Join Frithjof Nikolai Wilborn through the strategic landscape of Terminal Conflict's Soviet power brokering. Cold War grand strategy has never provided better statesmanship, as you discover how decisions may impact leaders on your path to victory! 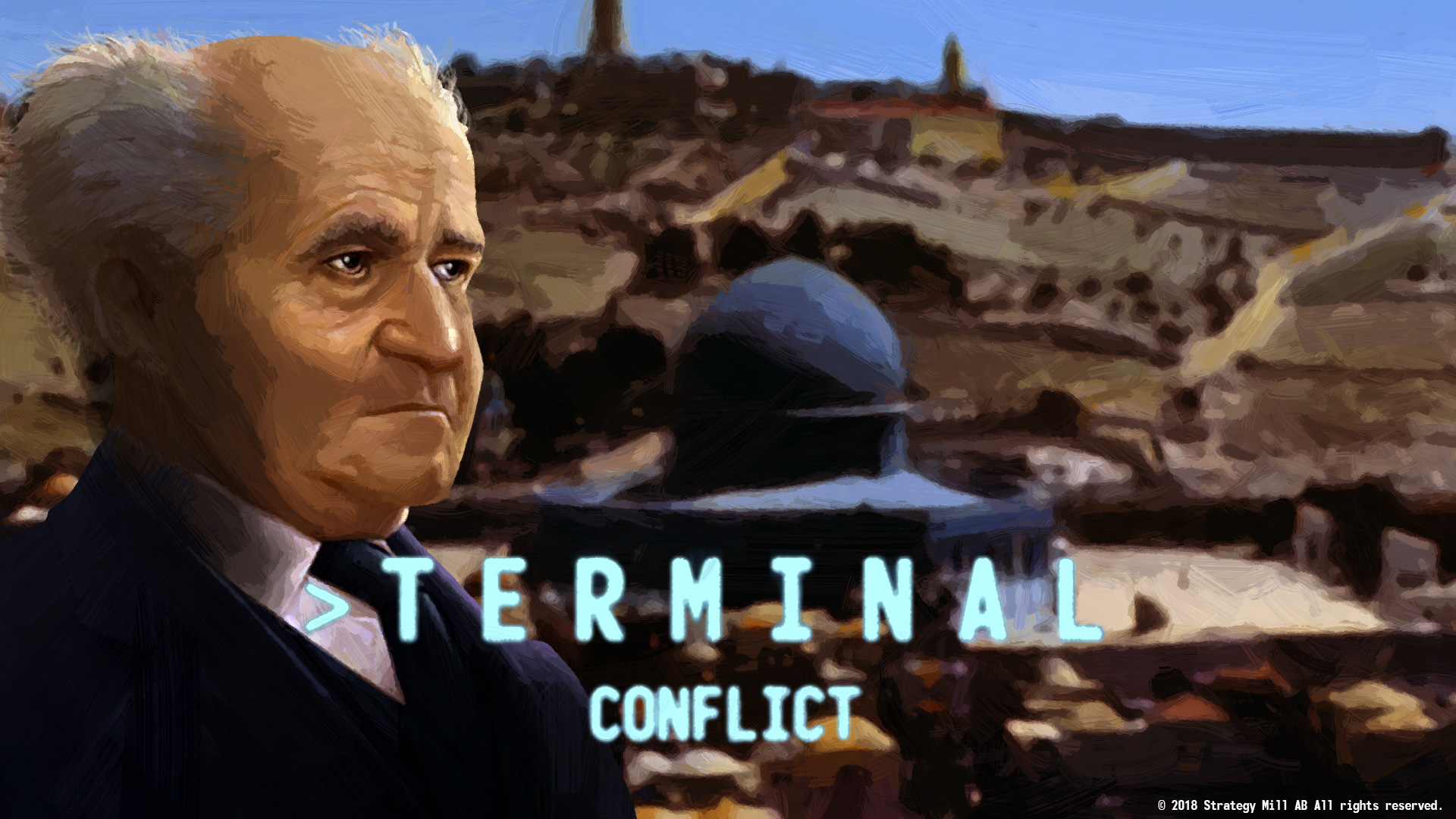 Hello, Frithjof Nikolai Wilborn reporting from a dusty Middle East! These last few weeks, we've been busy improving on the terminal systems for that epic clash between Israel and the Arab states. Put on your khakis and join us in this first part of a three part development diary.

The topic at hand today is the Leaders in the Levantian Zone, the eternal focal point of strife and discontent from ancient times and throughout the Cold War. The question for all power brokers of importance and naturally also for you, has always been whom to support. Something you will grapple with in a series historical plausible events, where you make the decisions. 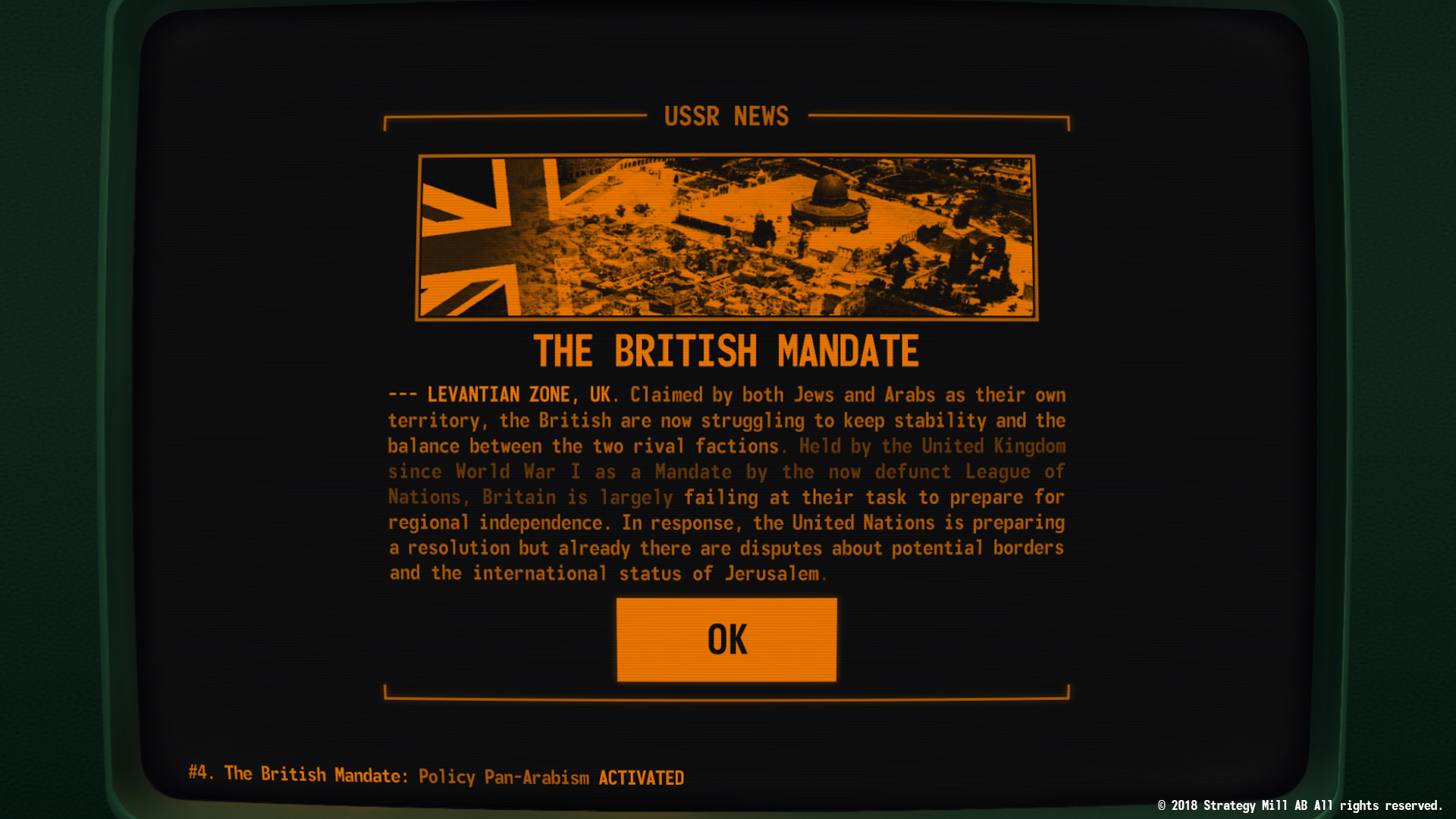 History in the making

The historical position for the USA in the conflict was one of wait and see but they can spring into action at once, should they deem it necessary. The USSR on their side face no less of a challenge. «A Masterful Proposal» will present itself for you, hero of the union, opening the opportunity to secure Egypt and thus the strait of the Suez Canal. Locking the Americans out of an easy logistical route between Asia and Europe will surely bring good things for the spread of Communism especially if the US chooses to support Israel. This is indeed a masterful plan, however, in case the Americans remain neutral or support the Arabs, you, the mighty General Secretary of the Soviet Union might choose to instead support Israel. 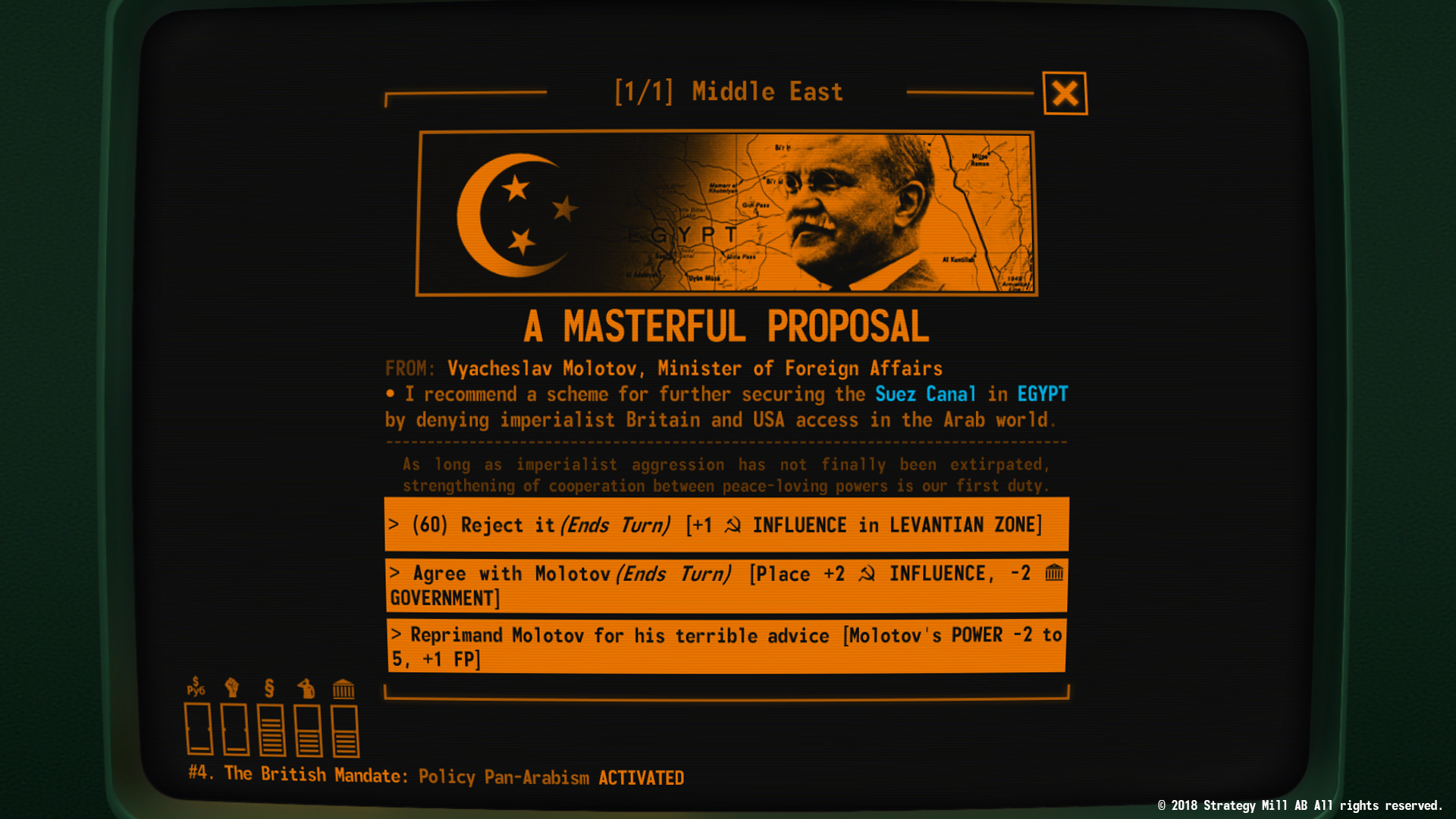 A battle of leadership, abilities and power

In the case of Ben Gurion, the benefit of Soviet action is that you can aim to dismantle one of America's strategic allies, by removing his many leader abilities. The leader abilities of both USA's and the USSR's allies are essential for their power projection and reach. By removing one of Ben Gurion's leader abilities (SUPPLY: Spend 1 POWER per Unit to restore combat Status of adjacent friendly units), you weaken the potential of the American stranglehold on the Middle East. For Ben Gurion it is beneficial to gain support from both superpowers, increasing his ability to hold onto power longer. Him being longer in power means he will be able to use his remaining abilities to the benefit of the USA for a longer time. Ben Gurion is more than willing to trade away his ability to strike at the USSR in exchange for strengthening his power and that of his nation. This is as such a risk/reward decision you need to take. Ben Gurion might stay in power, but he will not contribute to the expansion of US influence. At the same time, having a powerful leader occupying a strategic region will also prevent the US from recruiting additional leaders into the same region. 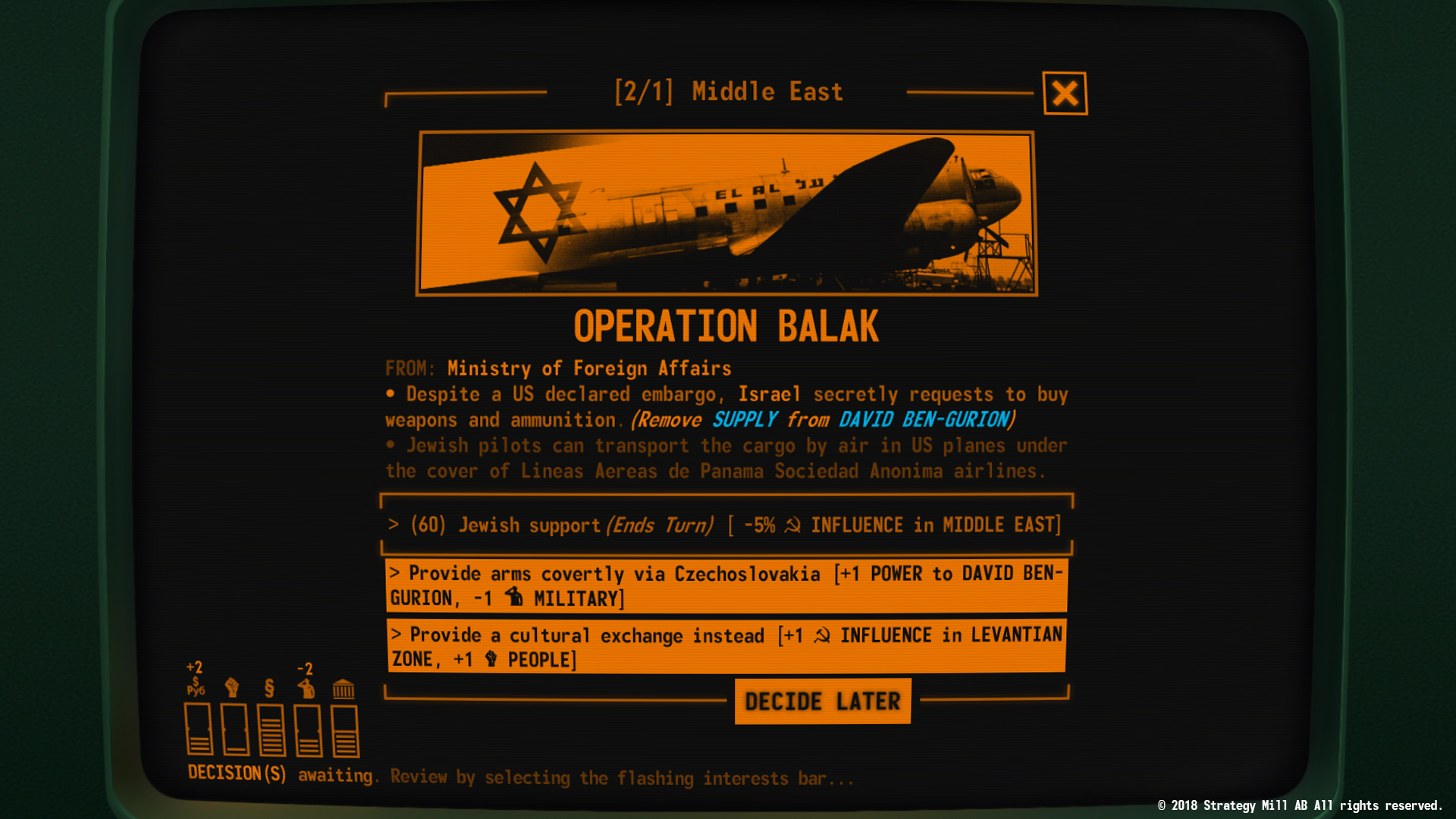 This all comes to head, at «The Plan of Partition». Both superpowers have the option to support either the Israeli State, Pan-Arabism or to remain neutral. Historically, the USSR supported the Israelis first but switched to the Arabs in the end but it doesn't have to be so in this timeline! We do not decide the outcome of history - you do! Choices have consequences and there is no better example then Ben-Gurion. Nominally America's man, but he would welcome USSR support, creating interesting outcomes. 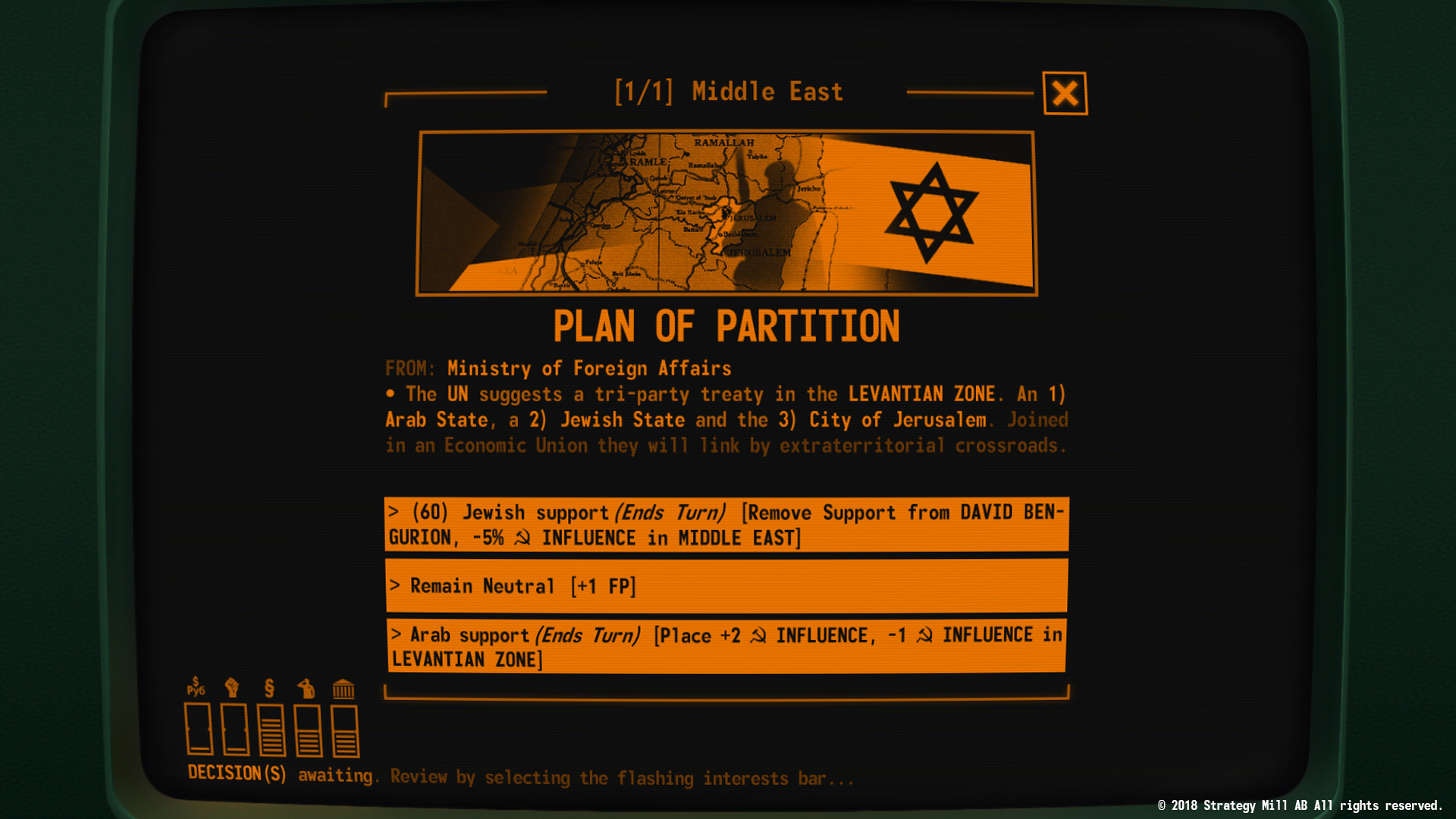 Thus, you will face a battle of allegiance - a battle of leadership. Will you have the strategy for providing that? Do not worry! I will naturally help you out with providing you one in the second part of this three part series. We will explore in detail the strategies and policies that you can enact to shape the Middle East of tomorrow!

Would you like to have news delivered about our game straight to you? Sign up at terminalconflict.com

Nik and the team