Over 200 years ago a war was waged against the floating city of Avalon lead by the demonic overlord Vylenkine. A powerful mage stood up against his evil forces and cast a spell that would seal the portals to the demonic realms forever. Except... there was a problem. The city froze and crashed and along with it all the citizens of Avalon including the love of his life, Avia. For hundreds of years he has been seeking a way to free Avia from the spell that he himself cast with little success. That is until you came... Tears of Avia combines turn based tactical game play with a diverse set of abilities coupled with a dynamic story system that reflects not only the decisions that you make but also the attitudes of the party you travel with.

Thanks for voting and helping Tears of Avia on it's quest to become the 2022 Indie of the Year. You are now in with a chance to score some free games. Help this game secure more votes by embedding the widget (or link) we have included below on your favorite sites.

I've been dreadful at writing about what I've been up to on Tears of Avia recently, due mainly to continuing doing what I've always done. Tears of Avia is still a game being produced in my spare time in evenings and weekends while I juggle a day job.

The only updates that I've really been putting out have been to my patreons, who get first dibs on what's been going on. It's only fair, they're helping lessen the burden of my monthly artist bill after all.

I've been continuing to hunt down funding for the game while working on it. Many people call for me to re-crowdsource, this option is definitely still on the cards but I'd rather go into it next time with more eyes on the project than just launching out of nowhere like I did the first time around.

To do this, I really want more of the game developed. This means youtubers and twitch players have more content they can get their teeth into and investors can understand more about the game that I am making.

Right now I'm in the process of preparing a pitch for a government grant designed for helping game studios grow, if I'm successful, I'll be halfway to getting the funds needed to do this full time. If not, then at least the game is nearer to completion.

One of the first things you experience in the game is the character selection screen. This is your chance to choose from five playable characters to start off with. You'll play the game from their perspective, during the game all of these characters will cross paths and you'll be able to party with further characters that aren't in the initial selection.

So we first tried to establish how we wanted to lay out this screen and we explored a few possibilities. 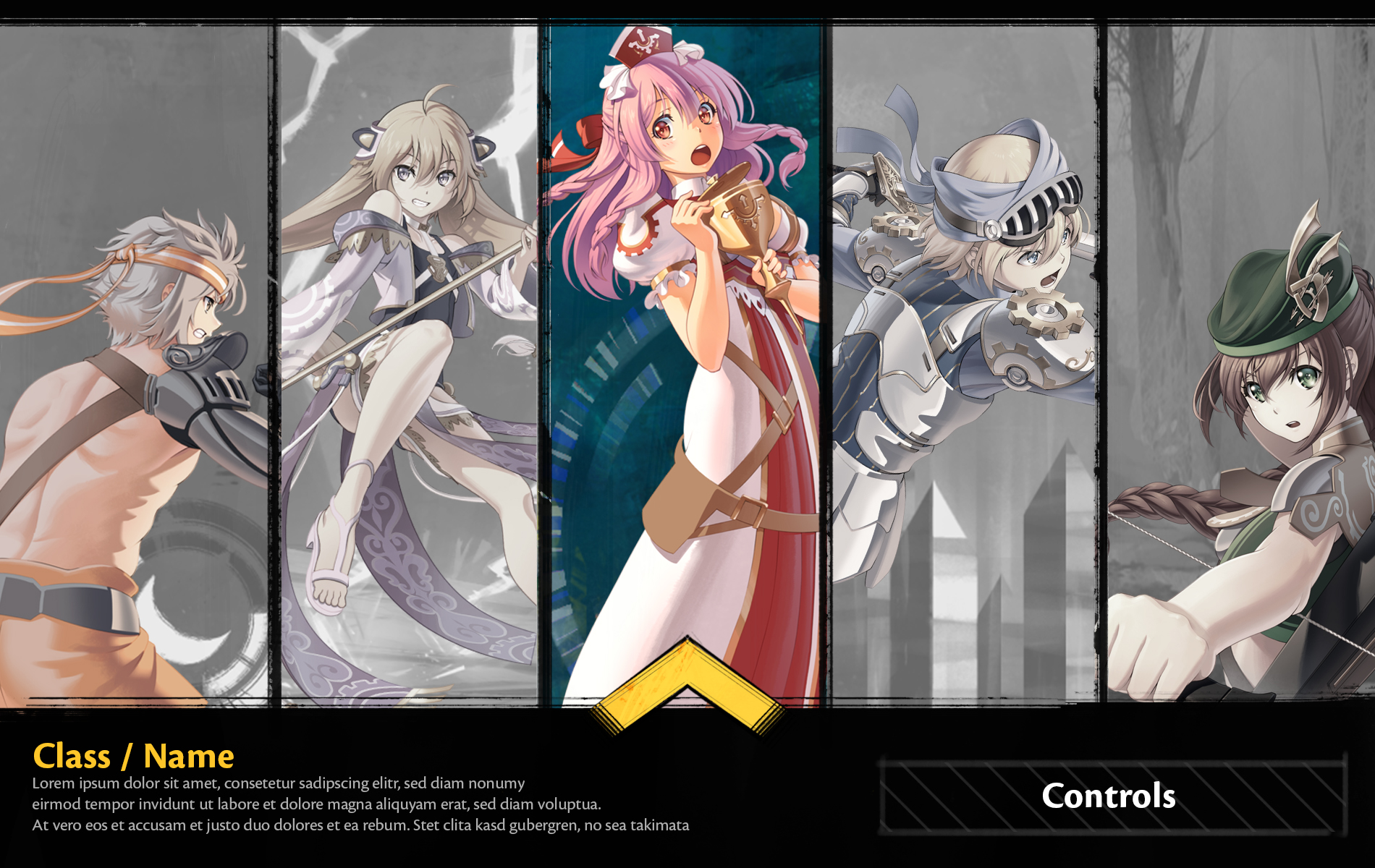 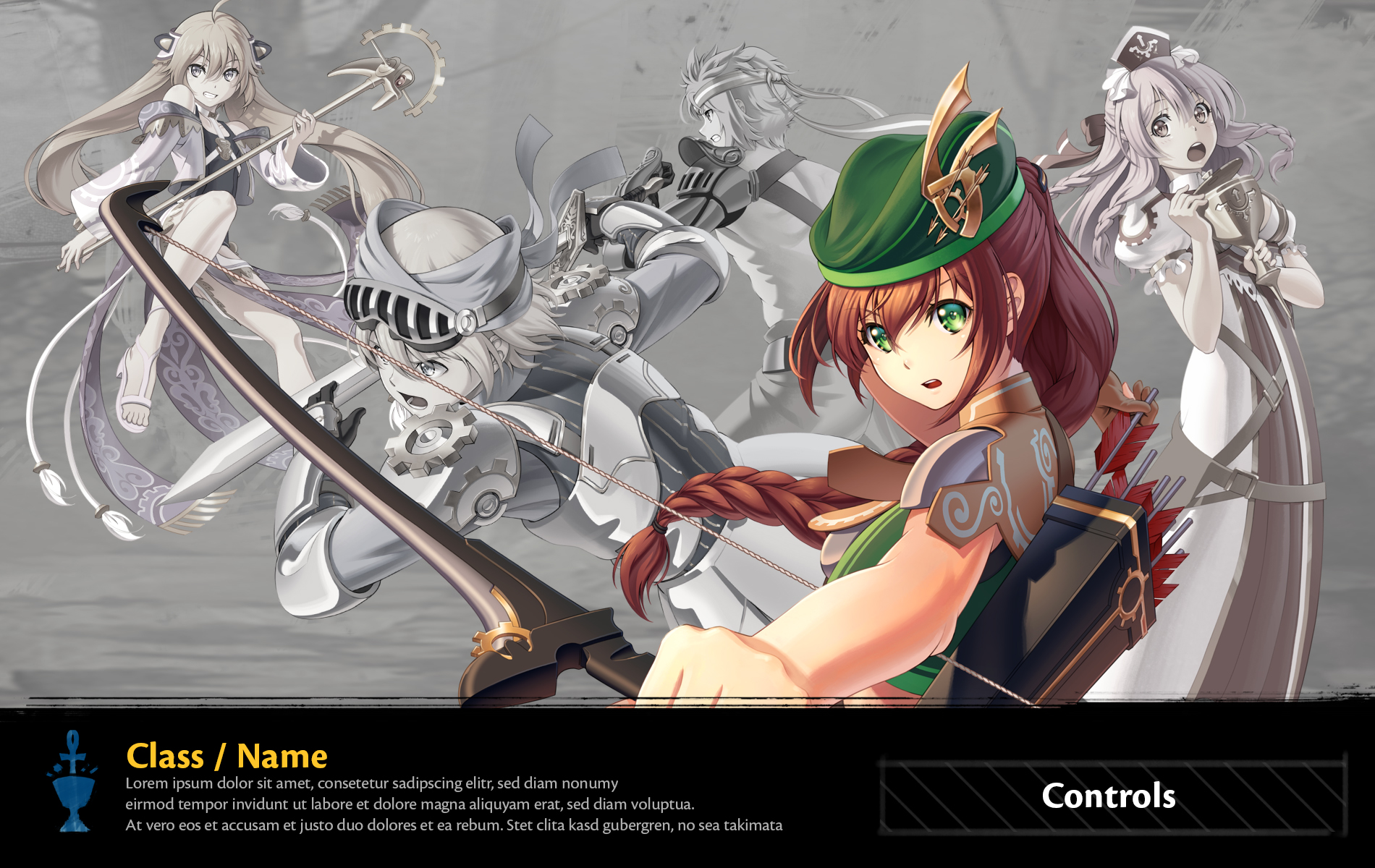 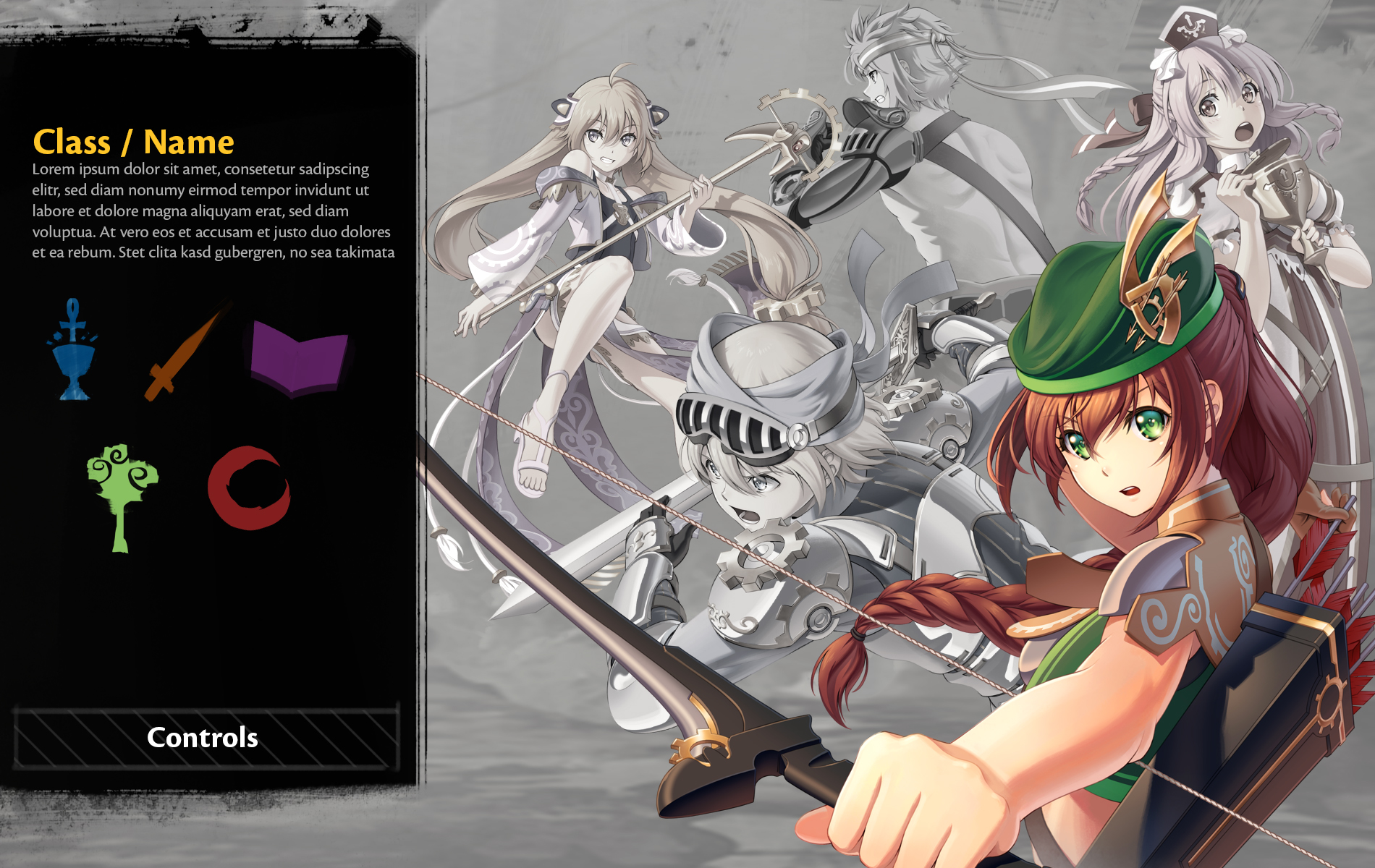 After gathering thoughts from our patreons, we further refined the layout of the character select screen and ended up trying to decide between a couple of possible layouts for the characters. It was a really hard choice on which to go with, B had a very much more dynamic posing, yet some of the characters in the background could've easily been lost. 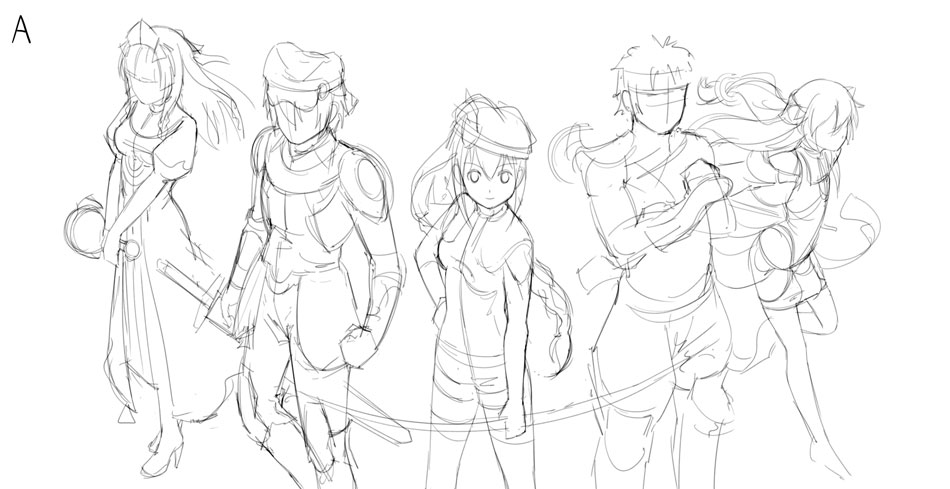 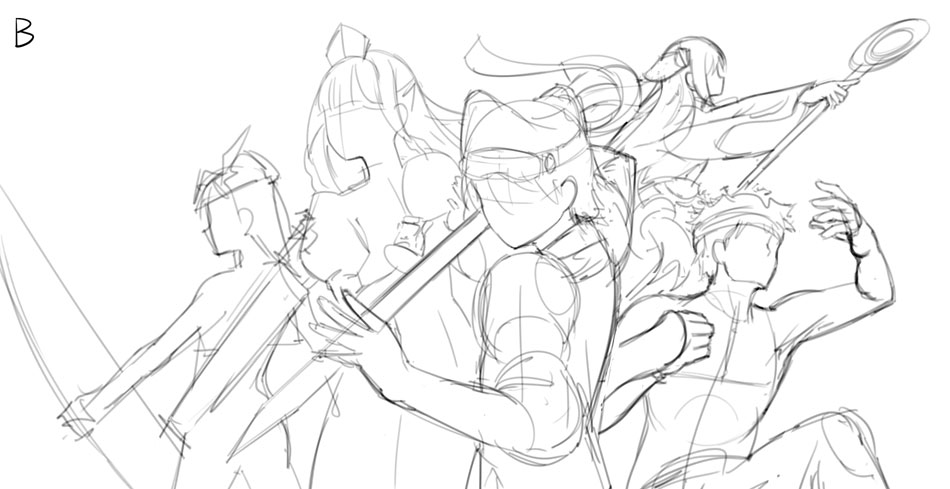 In our final iteration, we ended up going with a layout very similar to A, the only difference was that we changed the perspective a little so there wasn't so much dead space above the central character. The end result you can see for yourself below.

In Tears of Avia, the gods play a role in your tactical play. When your party comes back from battle, they are not automatically healed. You will need to visit a priest or temple in a town, where you can make an offering to a god of your choice.

Regardless of the god you choose, your party will be restored back to full health ready for battle but you will gain favour with that god. When you gain favour with a god, you gain passive bonuses by being in their good books. However, by favouring one god, the other gods grow jealous. It's possible to gain a negative passive debuff by angering another god too much, so it's down to you to choose who you want to align with, or if you want to maintain a calm balance.

Here are our initial concepts and ideas concerning the gods. 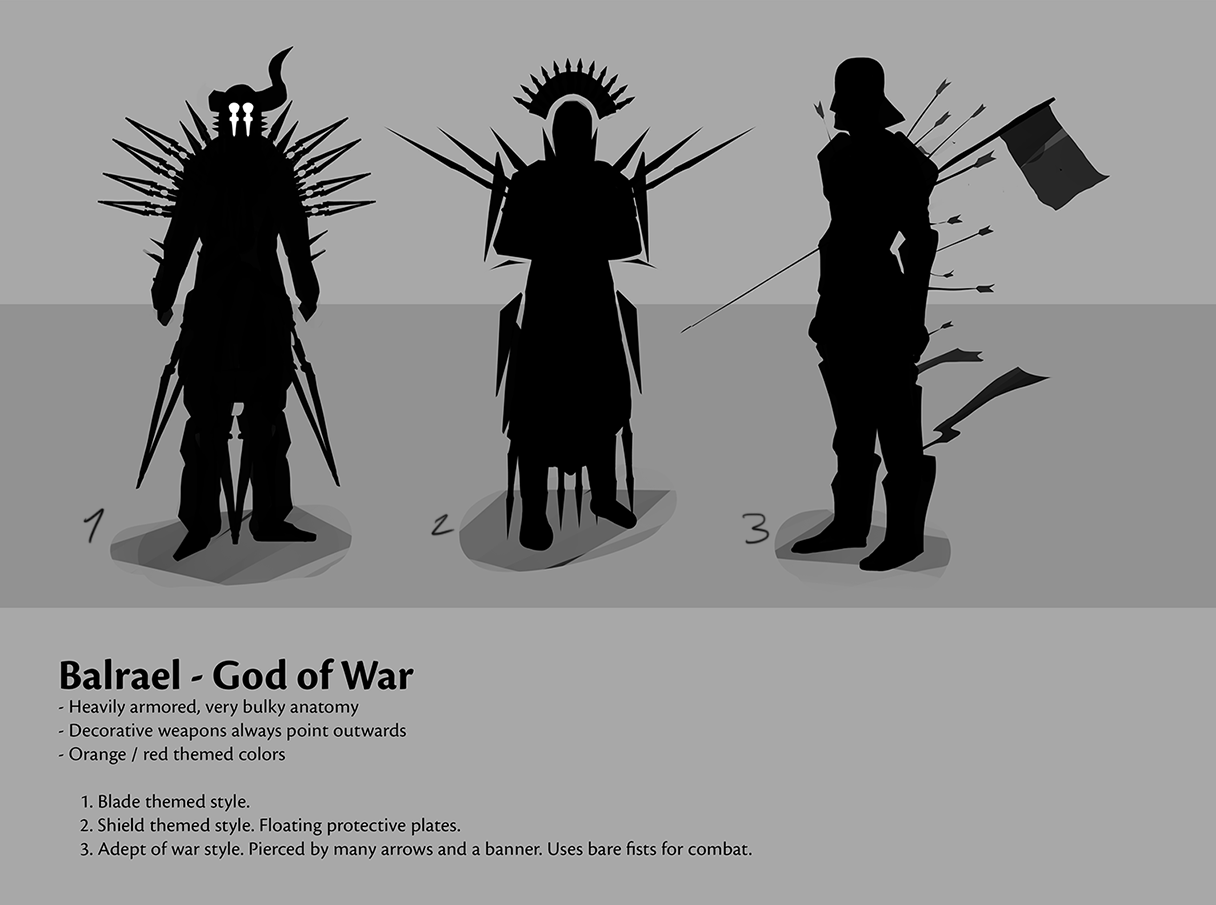 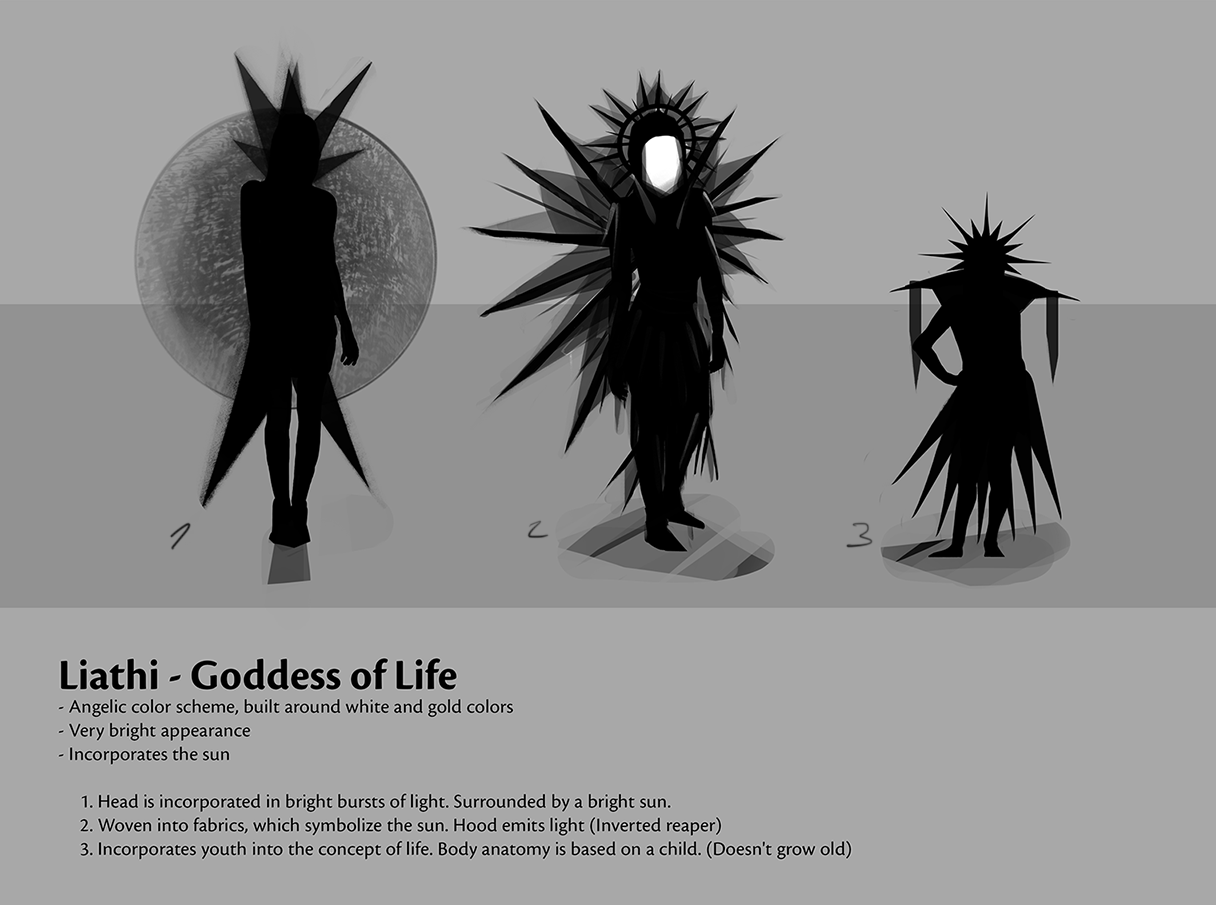 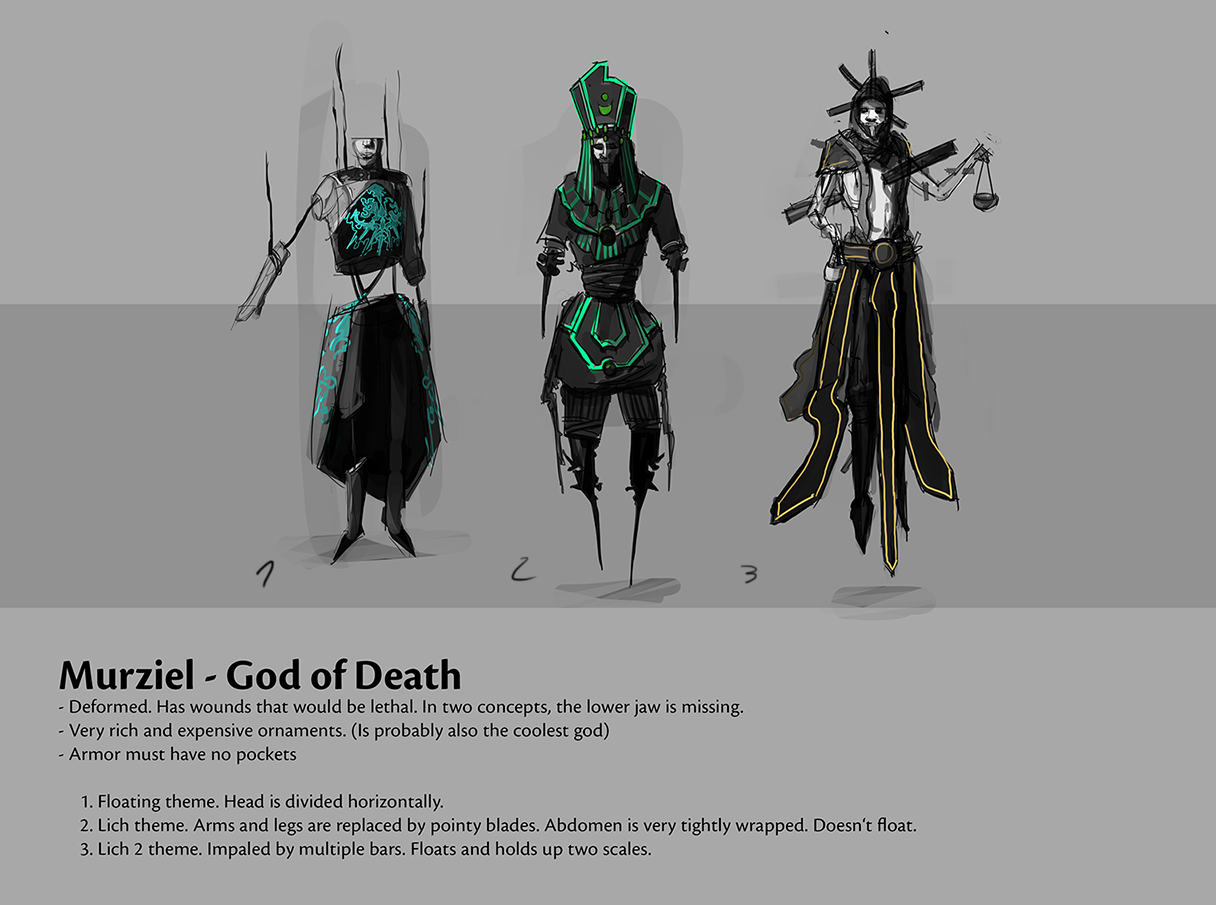 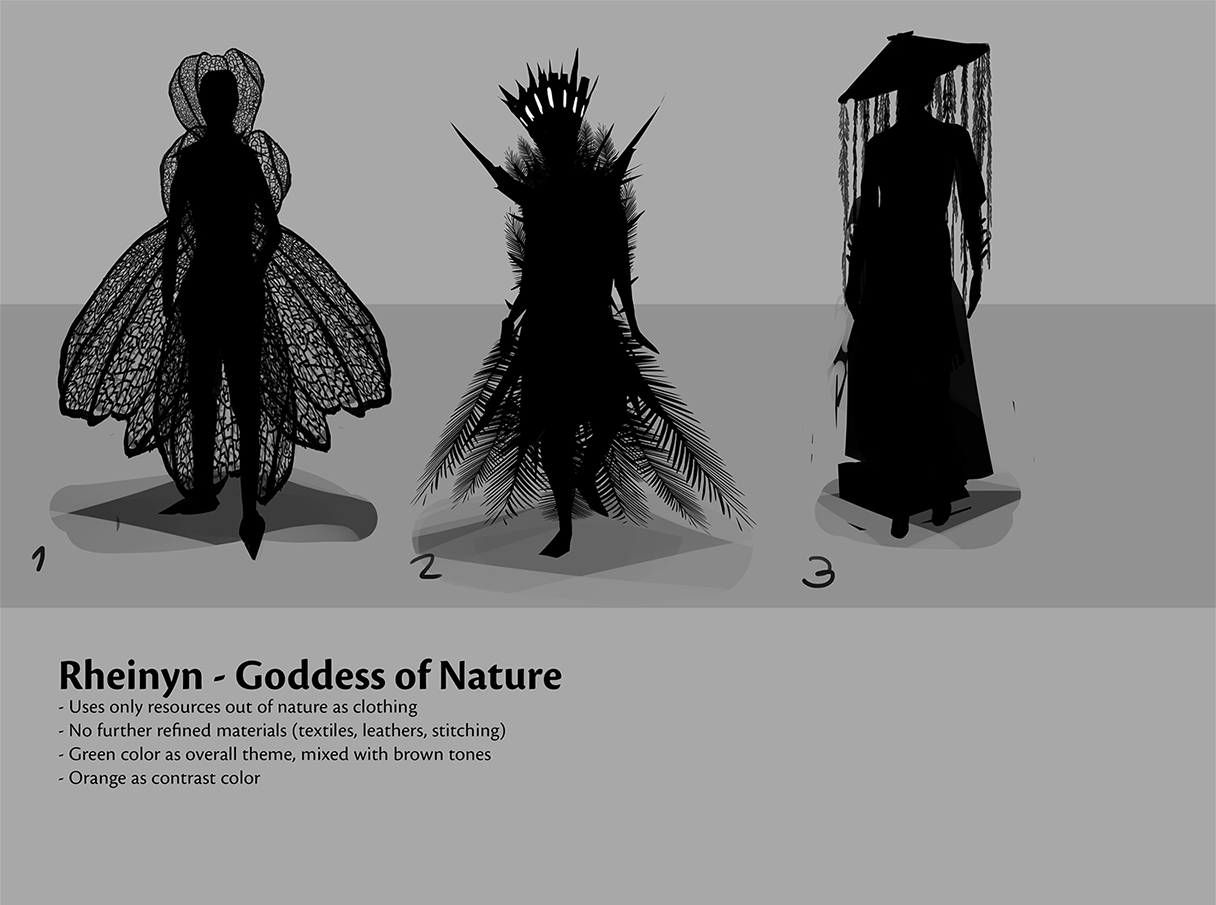 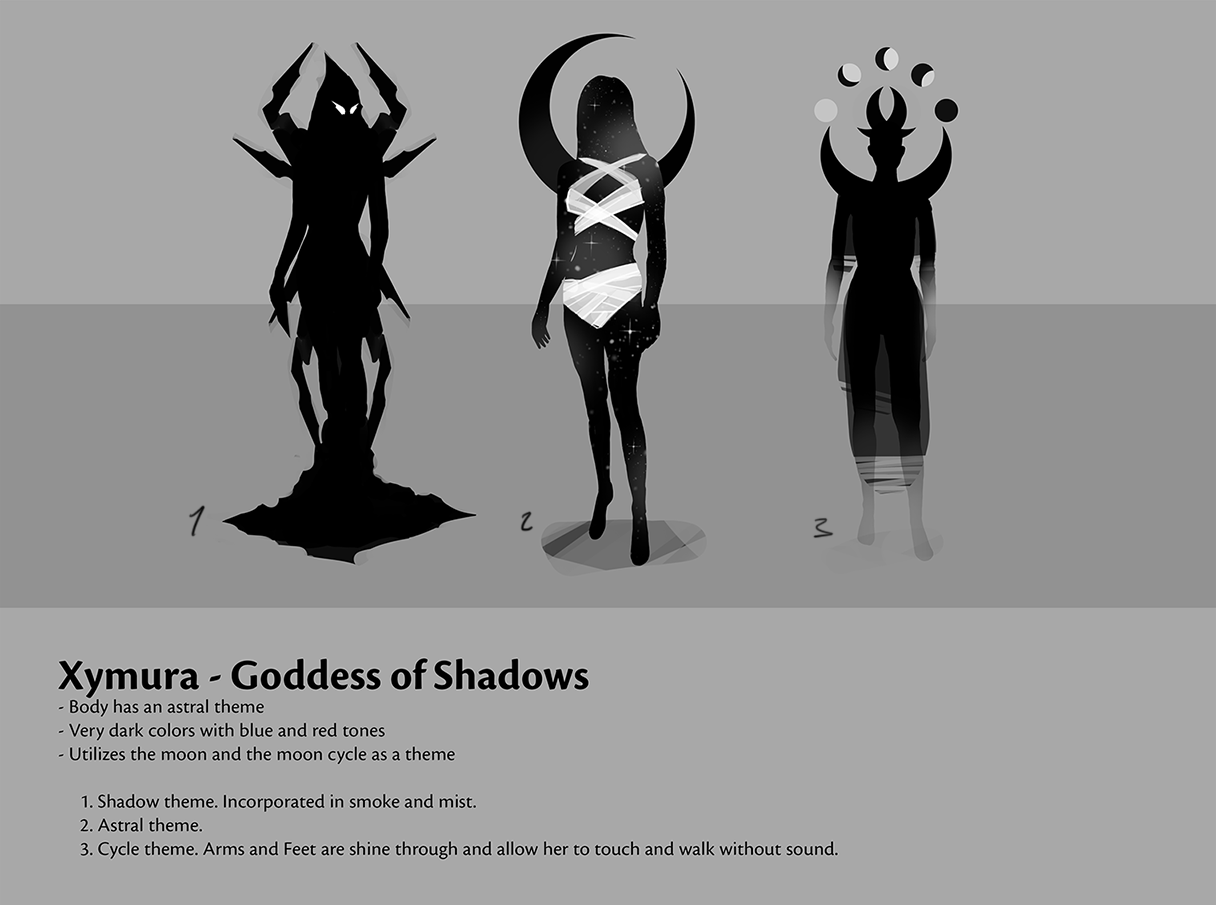 We bounced the ideas around our patreons, and then re factored once more, combining elements of all of the above to finally land upon the final concepts below.

A lot of work has gone into making early game flow. The early game needs to teach players how to play as well as immerse them in the world and lore of the game. Quite a lot of work went into trying to make non-invasive tutorial, and we effectively re-wrote the early game story twice over.

To support early gameplay, we needed to work on more skills. Since the game is all about build craft and tactical choice, the early game essentially needs at least the very bottom rung of every classes skill tree in place and also a variety of weapons (in our game they also come with skills).

As of last month, I finished all of the priest's T0 rung skills, and almost finished off the ranger's skills. Warrior, Mage and Brawler are still yet to be completed.

Here's some of the aforementioned skills that I worked upon. 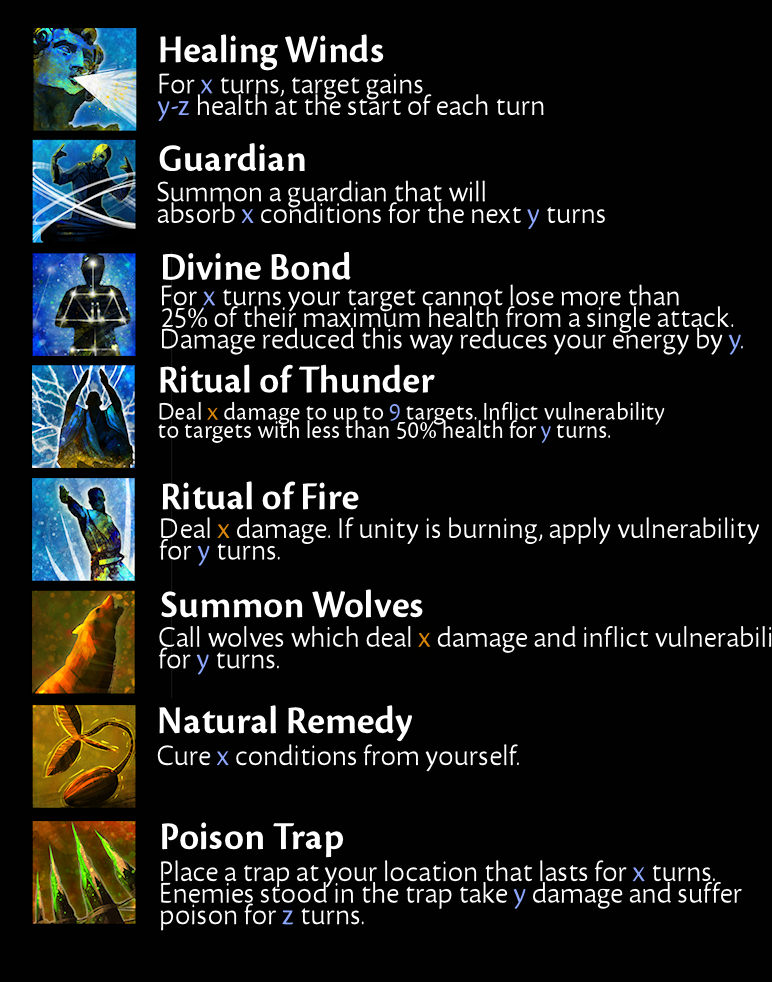 There's a lot of vulnerability inflicting skills in this set. Vulnerability in Tears of Avia is a negative condition that causes an opponent to take 10% more damage from any source. Deal 100 damage normally? You can count on it actually dishing out 110 damage.

These skills vary by cooldown, AoE and requirements to use, so they are subtly different in terms of usage. For instance, ritual of thunder isn't particularly useful until you have a group of people quite low on health, then you can effectively finish them off for a group spike AoE.

Ritual of Fire however, requires that you have the targets already burning (which you'll need other skills for). Summon wolves seems attractive when you notice that the vulnerability is unconditional, but it's only single target.

Of the skills above, Poison trap was my favourite. The play style with poison trap is different in that you can prepare traps in advance, then lure an enemy through them to deal massive damage. There's no limit on how many traps can be in an area (aside from how long they last) so you can create some insane spikes with a little bit of patience and a few traps unlocked.

You can see a few of the effects and the skills in action in the video below.

Levels, characters and other misc bits

We have been working on a few characters, I even had some core characters re-modelled. The initial characters I put in the game that were present in the EGX demo I modelled and textured personally. I'm more of a programmer than an artist, and while my work was passable, I wanted something that was a little better, so here's a few of the characters that we've been working on. 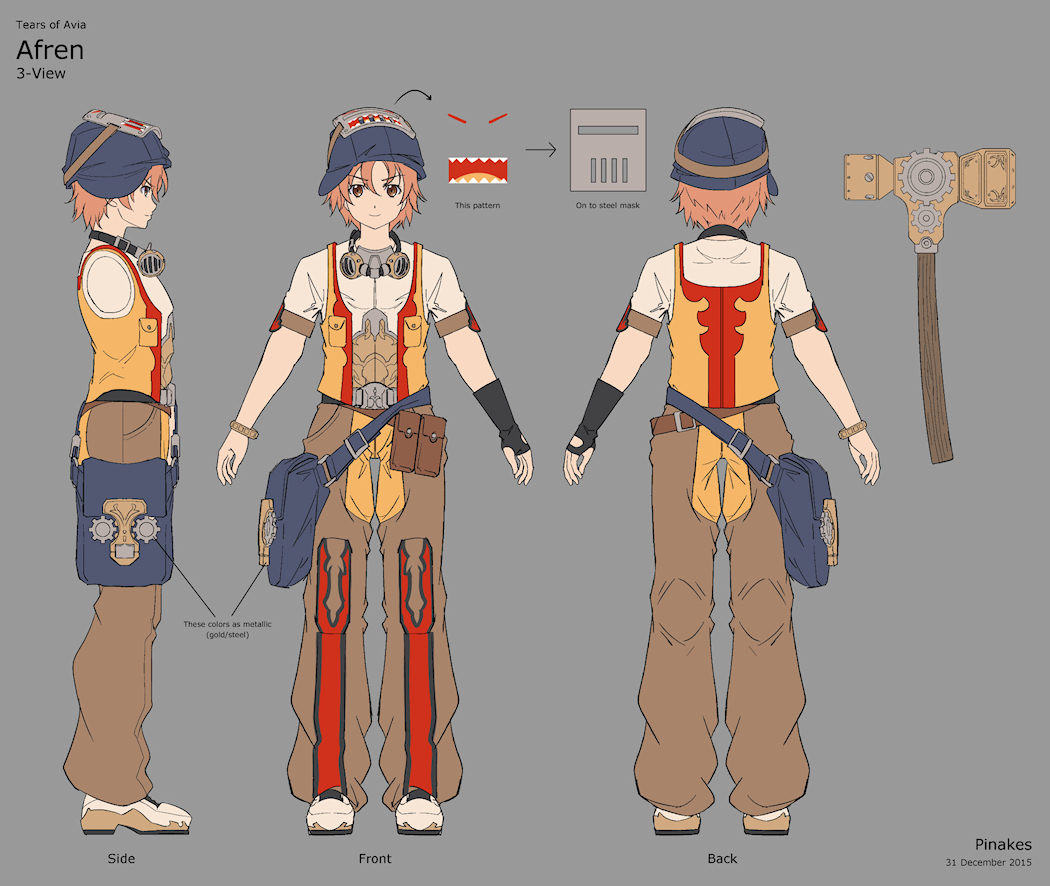 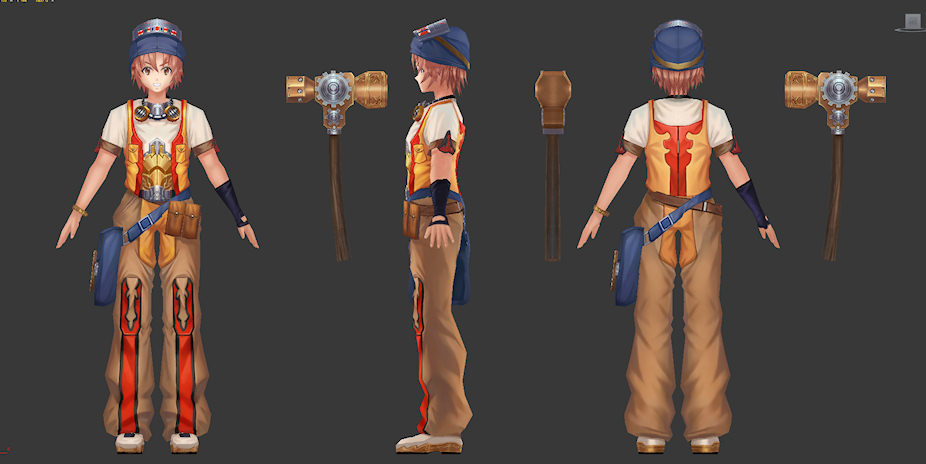 Afren is one of the playable characters in Tears of Avia. He's a warrior, and quite a friendly chap in general. You meet him very early into the game and spend quite a bit of time adventuring with him. 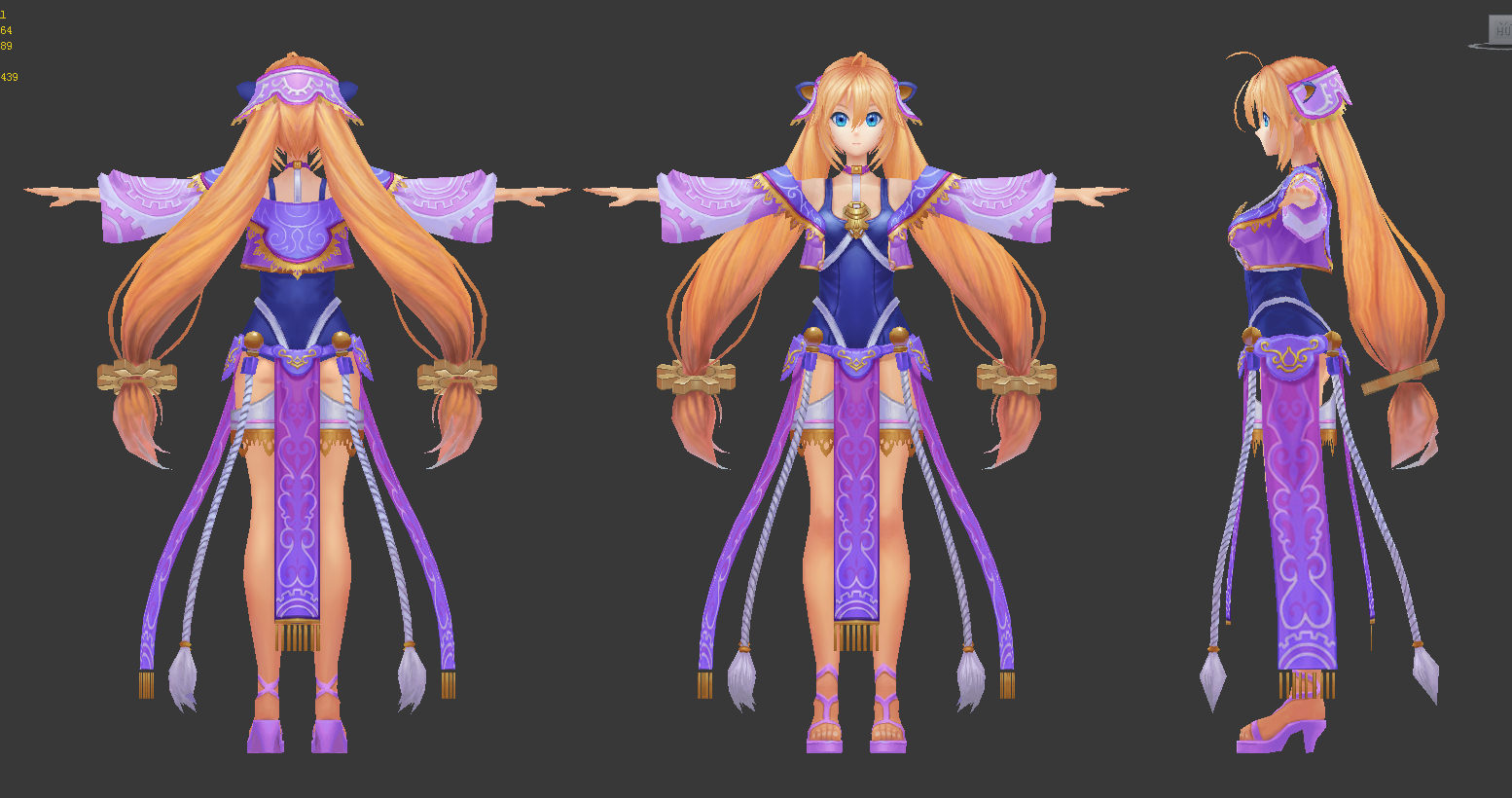 Iris, the self assured, overconfident mage got a remodel and re-texture. She's a lot better than my shabby attempt!

Kai also got the same treatment. A total re-make of the model. 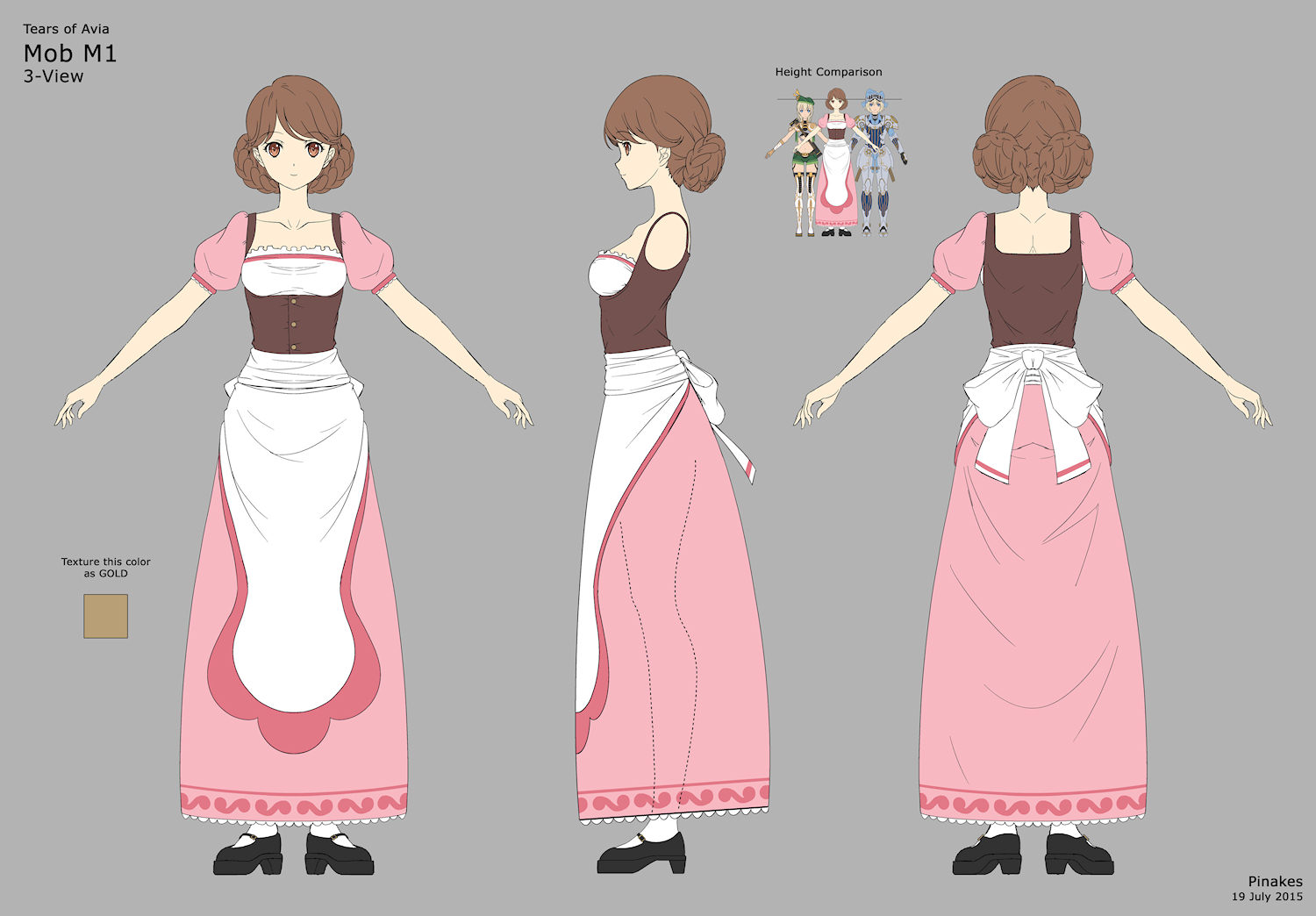 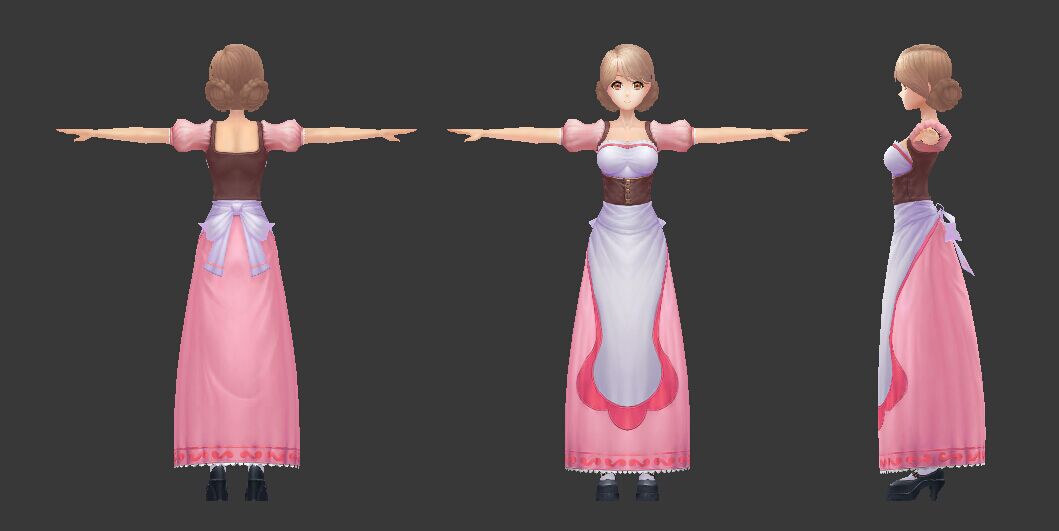 Finally, this NPC. We still don't have a name for her yet, but she was concepted from before we even attended EGX, it's only recently we actually got her modelled. She's either going to be a shopkeeper or in charge of the tavern, we haven't decided yet. We have a few other NPC's on the list waiting for implementation, we'll assign roles to them later most probably.

So that's what's been going down in Tears of Avia. If you'd like to help out or receive more frequent updates, please consider stopping by my patreon and helping out. Your help and feedback is much appreciated, and it helps move the game along even more awesomely by doing so.

Tales of our experiences of going through exhibiting at a trade show while simultaneously running two campaigns.

A roundup of Tears of Avia at EGX and Kickstarter campaign!

Tears of Avia launches trailer and is up on Steam Greenlight.

This week we have a look into the story system in Tears of Avia.

Not sure if you're looking for 3d Artists, but I'd love to potentially join in on this project.

Definitely watching! It looks good visually from what I can see, and sounds interesting. I hope EGX goes well for you.