SXPD: Episode 1, The Rookie
Available now on the appstore: Itunes.apple.com

SXPD is an exhilarating action racing game and a state of the art digital comic book fused into one. Essentially the world's first true game-comic book hybrid, SXPD offers you two top quality app experiences for the price of one. Play through each of the game's six chapters to unlock and unravel the whole story. Set in the fictional, privately owned 52nd state of America called New Royale, a secret order is in possession of a modern day Pandora's box; a weapon of mass destruction. Once opened, it will unleash a calamity upon New Royale.

SXPD pursuit force Indigo is dispatched to stop the order at all cost and recover the destructive weapon, but time is running out...


SXPD: The Rookie is a collaboration between Mighten Ink, Little Chicken Game Company and commissioned by OneBigGame.

SXPD: the Rookie, now live in the Canadian Appstore

SXPD is an exhilarating action racing game and a state of the art digital comic book fused into one.

Play through each of the game's 6 chapters to unlock and unravel the whole story. A story that revolves around the exploits of the SXPD, a female police force tasked with enforcing the law in a lawless state with many threats.

SXPD has been in development for over 2 years. Like all OneBigGame games, it was created pro bono for OneBigGame's charity and directed by an established name in videogames. In this case, industry legend David Perry supervised the development of the game, which started life as a small Flash racing game that took its inspiration from classic ZX Spectrum game ‘3D Deathchase'.

SXPD is designed and developed specifically for OneBigGame by renowned Amsterdam based studio Little Chicken Game Company. A percentage of proceeds will be shared with selected Children's Charities, as is the aim of One Big Game as a charity publisher.

Originally intended to be a 21st century tribute, it gradually grew into a standalone game. Integration of the art of famed graphic novelist Duke Mighten paved the way for the unique comic book/racing game hybrid that SXPD eventually became.

SXPD is available in the Canadian IPad Appstore now, worldwide release is planned for May. 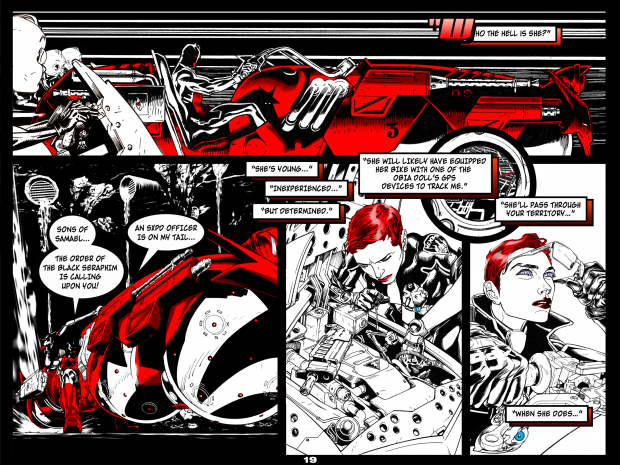 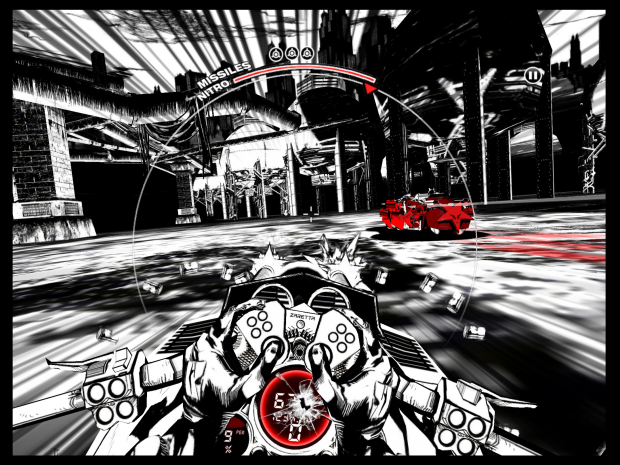 Nice style, Reminds me very much of madworld. I recommend doing this with color. The red, black and white has been done quite a bit and is kinda uninteresting. I think it would look great in full color, personally.

Indie
Tags
Embed Buttons
Link to SXPD: the Rookie by selecting a button and using the embed code provided more...