Meet Kyle Keever, an aspiring actor preparing to audition for the USA’s hit new show, ‘America’s Got Superpowers’. Join him in this point-and-click adventure comedy as he attempts to win over the judges and the audience through a series of increasingly complex puzzles and challenges.

Posted by nobullintentions on Mar 26th, 2014

Satirical point-and-click adventure The Supreme League of Patriots has launched on Steam Greenlight today. The game is scheduled to launch on Windows, Mac and Linux in July 2014, so use your superpowers to help us get the game through Greenlight!
Steamcommunity.com 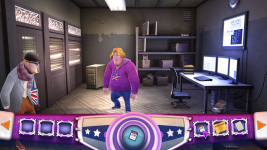 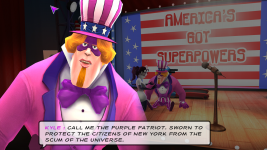 Superheroes are the shining beacons of humanity. They exist to guide us, to show us the way forward. Kind of like the übermensch. But definitely the fun, non-Naziübermensch. Because superheroes are there to protect the young and the weak and the good and to defend the gender normatives ...uh, we mean 'values of society'. And also kittens. Think of the kittens. Stuck in nasty trees.

Enter Kyle Keever, a mild-mannered aspiring actor who auditions for hit new reality show ‘America’s Got Superpowers’ and gets a little too into his alter-ego: a strong, brave, handsome, Aryan man the people call the Purple Patriot. Although defending Freedom, Equality and other capital nouns is his daily grind, the Purple Patriot’s favourite cause is stamping out the evils polluting his beloved New York. But when you’re a champion of justice with a supreme moral compass, those evils often resemble your personal pet peeves. Like hippies. And immigrants. And anyone a few Hooters short of heterosexual.

Still. Who’s going to argue with a superhero?