Starxium 20XX is a retro-futuristic competitive video game with cars, neons and 80s synths. Drive at high speed through the night to capture a convoy with your teammates !

It is played in teams of 4, the goal being to capture a convoy (a bit like a "capture the point" with a point that moves at high speed). The first team that manages to stay long enough near the convoy wins the round.

Each player controls a vehicle with a battery that recharges by performing aerial tricks. The battery can be used as a boost or for special skills involving a certain teamplay (deploy a springboard on the back of ones vehicle, create an electric arc between two vehicles ...).

Players can customize the paint of their vehicle and change their parts to change their stats (grip, weight, power, etc ...). The environment of the game has a retro-futuristic style inspired by the 70s and 80s, the synthwave and Tron films.

It's finally here: the free pre-alpha demo of Starxium 20XX! You can play with up to 16 players and up to 8 teams. If you want to try the multiplayer, you'll need to have Steam launched. Otherwive, you still can drive alone with the freeride mode.

Yes, I know, it's a bit late. Actually it's veeery late, 11 days remaining and the campaign is roughly about 14.5% of the goal, but hey, better late than never :D! Time play against me on this campaign, I've spent two weeks to achieve this quick demo for people to play and test, and hope for the best about press coverage ;). 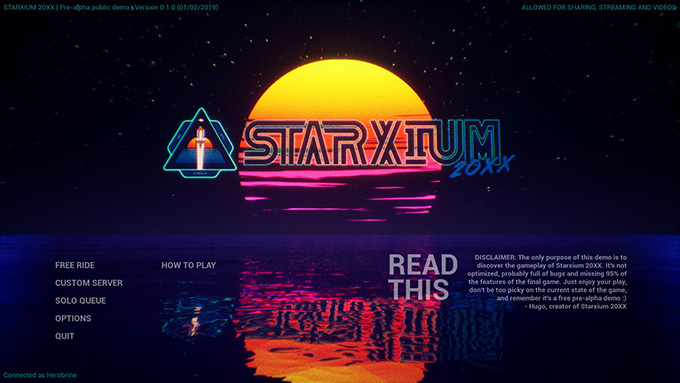 DISCLAIMER: The only purpose of this demo is to discover the gameplay of Starxium 20XX. It's not optimized, probably full of bugs and missing 95% of the features of the final game. Just enjoy your play, don't be too picky on the current state of the game, and remember it's a free pre-alpha demo :)

You can download it here on IndieDB here (only Windows 64bits, full HD and a decent graphic card recommended):

The Steam version should be up in Monday. But you can wishlist the game for now.

So what can you do in this demo? Well first thing is to read the "How to play" section. You may need to remap some key if you're not on an AZERTY keyboard, especially the direction and the ccset (cruise control set) keys.

The first mode is the "Freeride" where you can drive alone with no special goal but enjoying the ride and, most importantly, get used to the physic. It may seem a bit hard at the very beginning, but in no time (like 15 minutes of play) you'll be able to do some very cool tricks! Remember that respawn is set on the "Enter" key, you may need it... 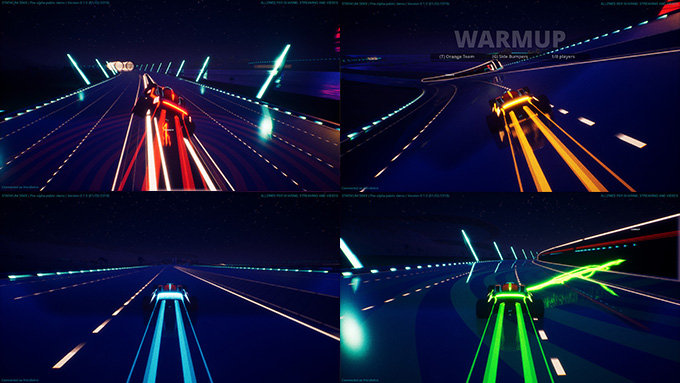 For the two other modes, you'll need to have steam installed and launched before you launch the game. Be sure to have something like "Connected as [your pseudo]" in the bottom left corner of your screen. It's actually the same thing as the Freeride one (the battle royal mod will come later), but you'll play against other players.

You can choose your team with "T" and change your power with "G". Once the game begin (when the server is full), those options are locked and you'll have to run for the convoy and capture it to make your team win! The only difference between "Custom server" and "Solo queue" is that teams are fixed to 2 and players in teams to 4 in "Solo queue". 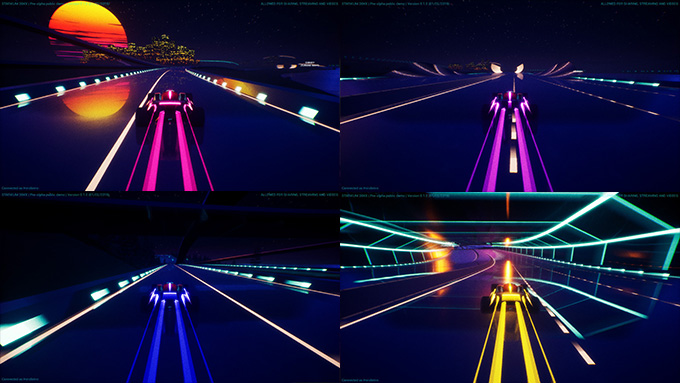 Also, if you're looking for teammates or opponents to play with, you're welcome on the discord server! You can set up a 1v1, a 4v4, a 2v2v2v2... whatever you like!

Enjoy, don't hesitate to give some feedback, but also remember that this is a quick pre-alpha demo, don't expect a full game with a huge amount of content and totally bug free ;)

Starxium 20XX is finally on Kickstarter! There are awesome rewards, and the public beta is announced for late 2019!

Finally, here's the trailer of the game, and a bunch of screenshots for your desktop !

Integrating everything onto the map !

Everything new from the last few months ! Logos, map, procedural elements... I'll be able to start the trailer very soon !

It's been quite a long time since I post an update on IndieDB... Lot of things have change, and the main ones are the logo, the roads generation, and...

It's finally here: the free pre-alpha demo of Starxium 20XX! You can play with up to 16 players and up to 8 teams.

Looking great man! What a concept! keep it up!

You probably guessed it, it's the polish manifacturer ;) ! They make transmissions. (Inspiration : <https://en.wikipedia.org/wiki/Wojtek_(bear)>)