What beautiful days are coming! Stargate: The New Enemy is rising on this year 2008 and we are happy to tell it. Why? You will quickly understand.

What beautiful days are coming! Stargate : The New Enemy is rising on this year 2008 and we are happy to tell it. Why? You will quickly understand.

First of all a little reminder : 2006, the year when we started to develop the game was a year to give rise to our work. Then in 2007, we upgraded what many fans asked us : the graphics, the A7 engine has permitted us to do it.But 2008 ... 2008 ... 2008, in fact nothing exceptional I believe XD.But of course, this time our goal will be to create a demonstration. Thus we focused principally on the development of missions by Mach (As you could remark in the precedent news) with an AI which will take forms step by step thank to the modelisation of characters by Tirex. It’s in this view, that we invite you to participate yourself to the development of the game with that auditions. Indeed, maybe you will have the chance to have your voice in the game!

Finally, we will talk about the last comings in our team who help us a lot and the frenetic Dav who always do such beautiful maps, let’s look at Abydos and the interior of the Hatak.

We start at once with three screens of the interior of the Hatak in order to start good! 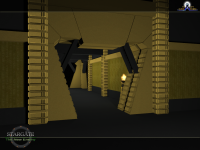 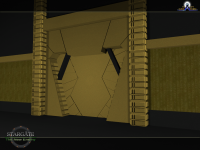 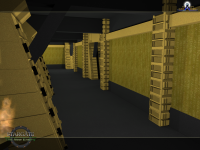 About Abydos, it will be exclusively a multiplayer map. So, you will have the chance to appreciate amazing combats against other players in an emblematic place of the series. 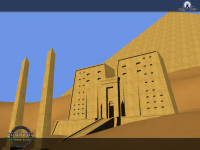 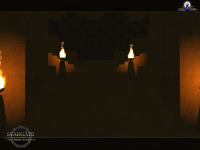 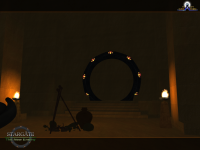 And so the more the game is known the more the team is bigger! It’s thanked to that that the team has admitted in his ranks new members that we are happy to receive.First of all, Tilgaht created a big surprise in the team; he has succeeded in adapting his self quickly to the team and in realizing good quality models in environments. We can also talk about his amazing commitment that we all enjoy. Then, Black_Storm, a old fogey incapable of standing on his legs…oups, I take the wrong slip sorry, ok, so I was saying…Black_Storm our new communication manager, will surely have one of the most important task to tolerate me! XD Indeed, he will help me to do the redaction of the news and also to spread the advertisement of the game. Do not hesitate to ask him some questions such as “When will the game be released?” he will be fond of giving you an answer.Finally, Neopier, the German translator, has just joined our ranks for some time. He showed us his devotion for the team and his desire to present our video game to the German Stargate community, so we cheer him a lot!

We also whish good luck to those who have just applied for a sit in the team, we will try to reply at any application as fast as we can.

"You dream of having your voice into “Stargate : The New Enemy”? Don’t hesitate more. Send us now a sample of your voice reading the text below according to the character you will choose.

Good luck to everybody and don’t forget to send your performance to contact@mach-creation.com with your name, surname, age, sex, pseudonym and mail address to contact you.

We are extremely grateful for your participation."

Just to give you a preview of the characters, here we can see the complete team : SG-1 whom joints are not finished! XD You can remark behind the presence of Walter and Hammond. 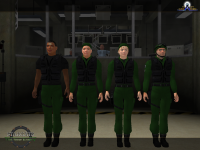 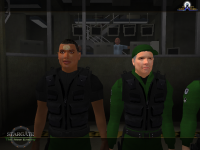 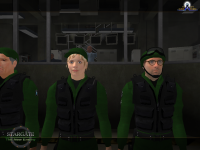 P.S : The textures of the characters are totally temporaries, we remind you again that we are looking for texture makers, don’t hesitate to apply for! We are waiting for you.

Thank you to give us your most precious attention and we hope as always that you enjoy this news.

the upper torso on the women looks misshapen. Try making the shoulders smaller and the upper arms not as large. Also try change the torso shape a little for each character. Other then that the characters look great! Maybe look at current army standards for the proper colours instead of that grassy green your using atm.

this mod looks cool. I'll be watching this one carefully

This is not a mod Noobkiller, this is a indie game =)

Thank you for your criticisms Henley =)
The characters are nearing completion ;)

We are going to look that ^^

hey X-303 a quick question, will you have the character Anubis in the game? and if so i might have some voice samples if he is in it character :P

Sorry Rosasman but we don't have make the character Anubis :/
He isn't in the script ;)

well how about a goa'uld? xD

This certainly seems interesting. I have always wanted a Stargate game since that one they made ages ago couldn't be released because of stupid MGM. Grr.

But good luck with the game.

No offence but are the text samples above taken directly from the script? If so i'd like to offer my assistance to the project as a proofer! I'm used to second languages (my wife is Chinese and my Chinese is better than her English!) and i'd hate to have 2 years of work and a very promising project tarnished by a few grammar errors!