Here we release the smelter, refinery, some new turrets and a tonne of fixes!

We've got the latest major update coming to you all live in time for the weekend! In this update, we give you all the much sought after smelter and refinery! Yes, now you don't have to hunt for your ingots (though that's still an occurance)! This is pretty fantastic news, as it also allows one to combine basic ores into advanced ores to be later smelted into the higher tier ingots required for the best equipment.

Check out the Refinery here: 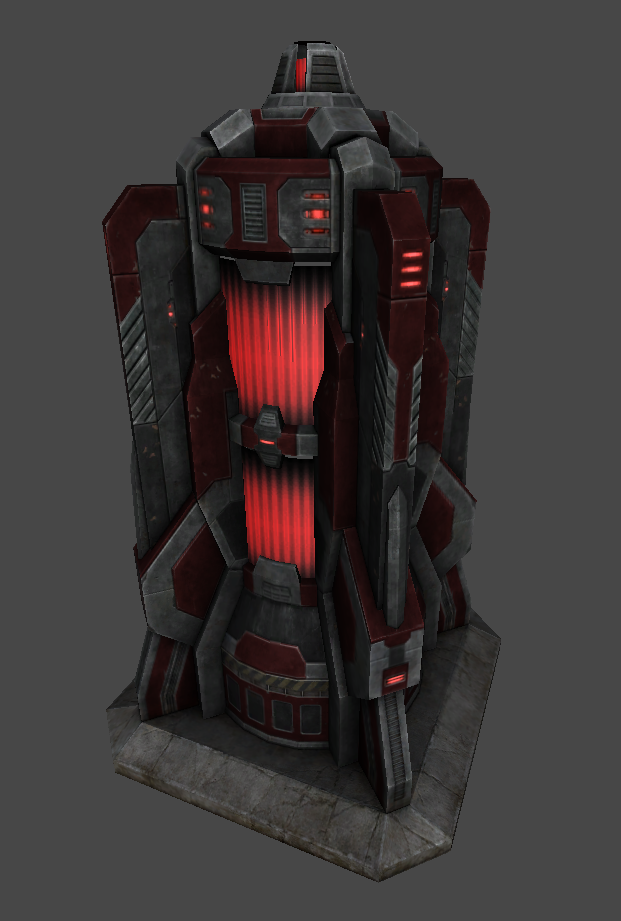 The refinery helps players craft the more advanced ore in the game that cannot be mined, but must be combined in order to be obtained.

And next up, we have the Smelter:

This is the actual item used to convert ores into ingots

We're also bringing you more in the way of base defense, with the introduction of the inexpensive and fast-acting minigun turret, allowing players to secure rare deposits for their faction quickly. We're also introducing the much more powerful, elevated laser turret in order to create the feeling of a well-entrenched position. 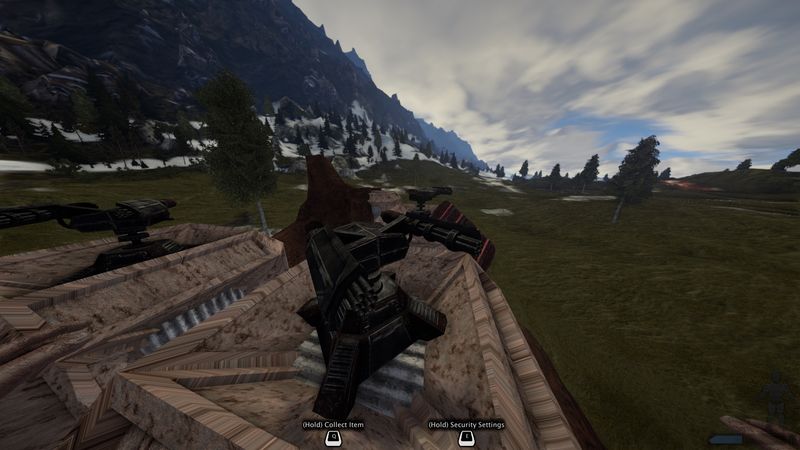 The minigun turret standing sentry at an outpost

And here we have the Laser Tower: 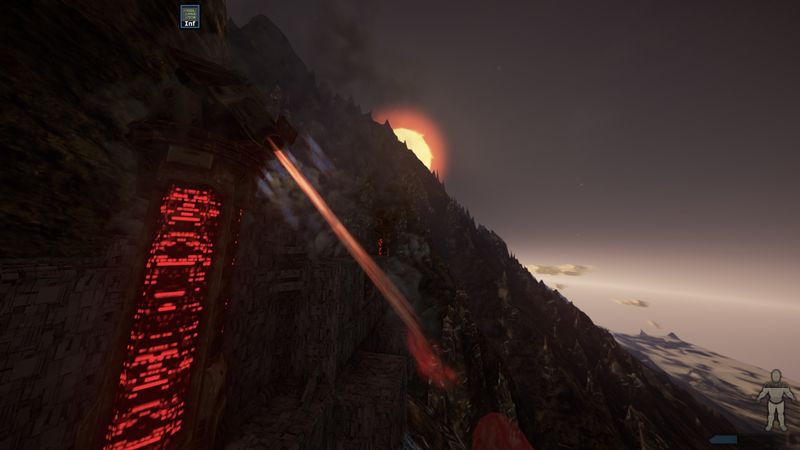 The Laser Tower fending off an attack on a mountainside.

With all these new defenses, you're probably wondering two things "How do I power them all?" and conversely "How do I shut them down in a confrontation?"

To answer the first question, we've added a new high-end power generator known as the Fusion Generator. It's radius is quite massive, and has the capability of powering several objects far away from it. And secondly, we've equipped players with a brand new grenade type, known as the EMP grenade. The EMP grenade specializes in shutting down turrets and other powered objects.

Check out this look at the Fusion Generator: 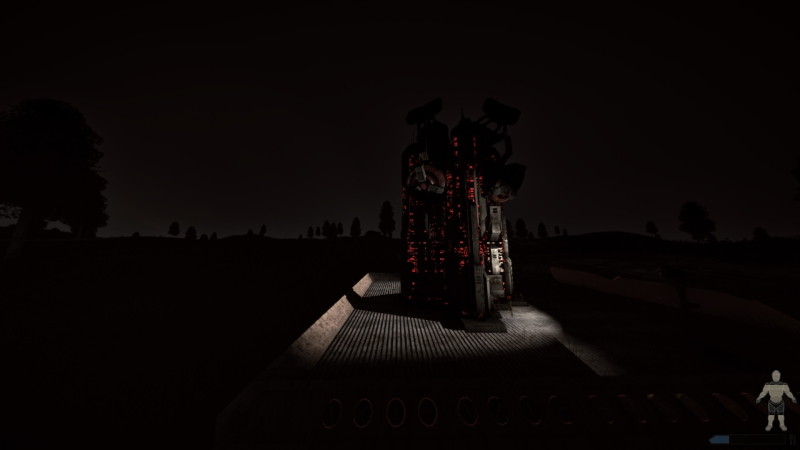 As was previewed on our facebook page (https://www.facebook.com/StarForgeGame?ref=hl) we're introducing a new monster into the game! A custom creation of our own called the Jelly Puff! This species is reminiscent of spiders back on Earth, but with the ability to float like a jelly, and puff up and explode like a puffer fish. They're pretty deadly in close-quarters, so be careful when wandering about the crashed ships. They seem to be attracted to the radiation, so the stronger the emissions, the more likely you'll run into one of these guys.

An imposing close-up of the Jelly Puff: 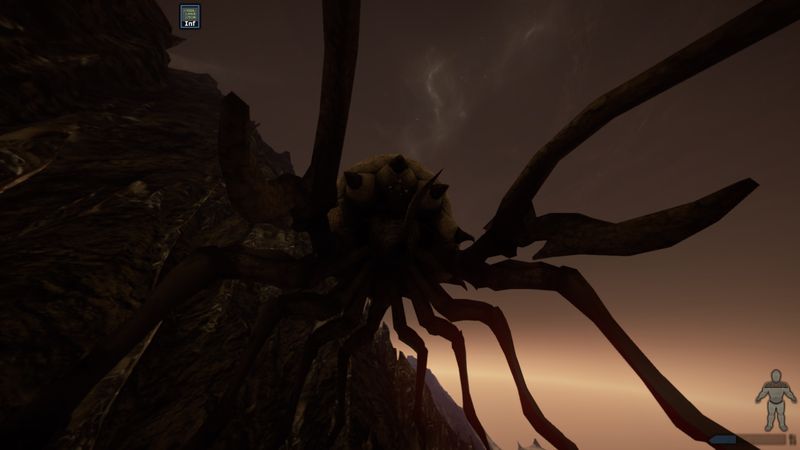 Note: Not nearly as friendly as its name would imply

We've also spent a considerable amount of effort on fixing up the framerate issues related to creature spawning. There should also be dramatically less creatures and NPCs spawning, along with increased spawn timers as well, aiding the fix. We've also tidied up vehicle related issues as well, and made improvements to cave and tunnel generation. Two more front-end changes that we've added to the game include a new weapon (omigosh!) and adding functionality to the paint-gun. Players are now able to paint themselves and each other, including their armor sets with the paintgun. There also is a hue-slider within the in-game settings menu, where one can dynamically change their hue.

The new weapon we've got is the double-barrelled shotgun! The players can now fire two intense rounds of buckshot fury into the faces of their greatest nemesis before reloading this beast. 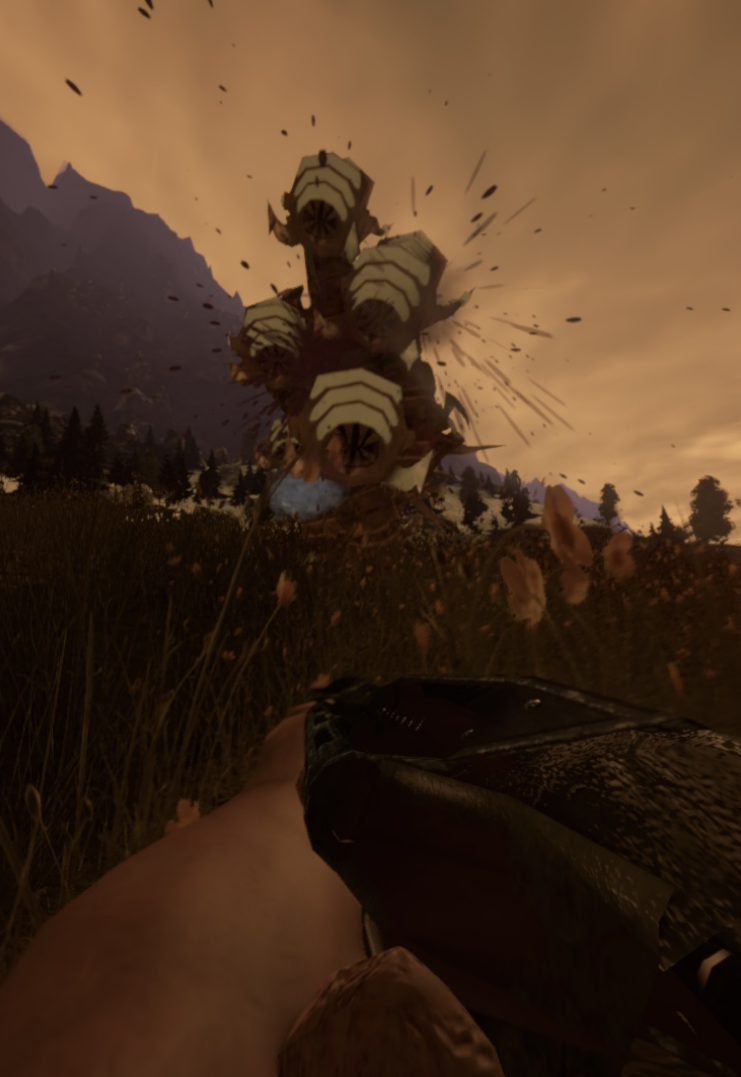 We're really excited to release this update, as we feel it ties up 0.7.5 quite nicely, and brings the progression of the development into an excellent launchpad for things to come.

Thanks so much for supporting us this far, I hope you guys enjoy playing the new update! From everyone here at Code}{atch, have a good weekend! Sincerely,--Will PATCHNOTES:- Fixed an issue where too many enemies spawned in multiplayer games and negatively affected performance
- Reduced the total number of enemy and NPC spawns dramatically and increased the time between spawns
- The dual barrelled shotgun is now available
- The EMP grenade is now available
- The Fusion Power Generator is now available
- The Jelly Puff is now populating the crashed ship
- The Minigun Turret and Laser Tower are now available
- The Smelter and Refinery are now available to craft ingots
- There is a chance the mid section of the ship will be discoverable instead of the back end
- A variety of vehicle related issues have been addressed
- Made improvements to cave and tunnel spawning
- Players are now able to paint each other with the paint gun- Voice Chat now enabled in-game, allowing players to talk to anyone within a 75 meter radius. Push 'V' to enable.

***DISCLAIMER*** PREVIOUS SAVE GAMES WILL NO LONGER FUNCTION WITH THIS UPDATE