Star Wars: Imperial Winter is a free, multi-platform, real time strategy game using the open-source Spring RTS engine. Featuring over a hundred different units for the Galactic Empire and Rebel Alliance, spanning from The Phantom Menace to Return of the Jedi, SW:IW aims to not only contain the best gameplay of any Star Wars RTS, but the most diverse cast of units, including: Stormtroopers, TIE Fighters, X-Wings, stealthy Rebel Commandos, Bothan spies, Royal Guards, Wookiees, "reactivated" Battle Droids, repulsorlift tanks, walkers, and more!

Gameplay features include asymmetrical balance, with the two factions playing very differently from each other; territory-based constant-income resource system allowing a fluid economy rather than paying upfront; realistic weapon physics, with every single projectile's path is realistically calculated, meaning your men can hide behind a hill from enemy laser fire but not from an artillery cannon, and many other features.

Some units, such as Jedi/Sith and AT-AT walkers, will not be initially available because of the balance issues they bring. We must first develop the lower-level units before we can implement such strong units.

If you would like to help or make suggestions, contact via our forum [Imperialwinter.com], or via email: starwarsspring [at] gmail [dot] com .

I thought seeing as it's been so long since our last newspost here (part laziness, part not wanting to knock off the PCG article news), I thought I'd let everyone know how everything is going, and make sure you're all well aware that Star Wars: Imperial Winter is moving along at an excellent pace.

We've entered a stage of heavy beta-testing, with around 15 regular testers running games almost nightly. Our design is certainly being put through it's paces, and there are plenty of issues both big and small that we are working our way through. On the whole, feedback is positive, and the game seems to be developing as we've foreseen (cue emperor's cackle).

Imperial Winter is proving to be a well paced strategic-level game revolving around territorial control with an emphasis on troop manuevering and placement. The main body of player's armed forces is made up by infantry (being necessary to capture territory), who are then supported by vehicles and air.

Currently, the beta players are playing with a limited unit set, restricted from what we have planned for the final public release so that we could ensure a tight balance for the early tiers. We are working hard on finishing up the final heavy units for the public release, so that we can introduce it to the testing pool, fine tune, and then release to you!

You can track our progress here: Imperialwinter.com

We'll be showing off some of our completed units in the coming weeks, so keep checking our moddb page.

To get things off the bat, here are some images showing off our new Tatooine mapset, with features by Gnomre and myself, and the gorgeous map produced by a new team member, Beherith. 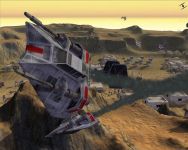 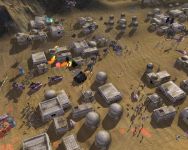 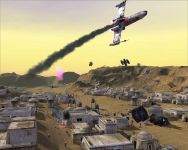 Amidst the action you might be able to spot a few of the previously unseen Imperial Walkers that our talented skinner Lynx has finished in the last few weeks.

Finally, a reminder that we are still very interested in gaining assistance from anyone with skills in modelling, texturing, or programming (lua coding in particular). If you lack these, and still want to help out, we're also looking for people to help out with voice acting for our units. Please direct any inquiries to our forum: Forums.imperialwinter.com

Star Wars Spring is featured in the February issue of PC Gamer UK!

Always on the move.

New media and a new means for anyone to get involved in SWS - even those without modding abilities!

Star Wars Spring is rolling along nicely. We have opened new forums. Check out our gallery for new screenshots, as well as our Help Wanted page, where...

A few changes have been made to this page, which I'll explain here to avoid confusion. The current state of this mod has been changed from 'Released...

It's been dead for a decade guys, don't expect an update or anything

When will an open beta release? If I'm honest, I think only skirmish should be available for an open beta.

May sound dumb but are you planning a mac release ?

has this come to a stop?