StarMade now has a new planet type: Ice. Also a lot of Server Fixes and features were added.

A lot has been added and updated in the world of StarMade once again.

This new planet uses a modified algorithm to create a glacier like world. The atmosphere has a very dark blue hue, and you will be able to find rare glowing crystals in its depths. 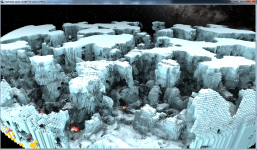 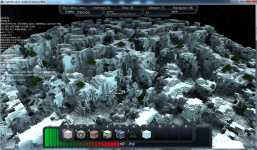 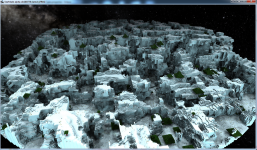 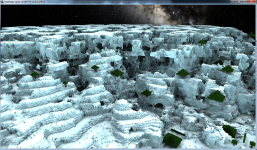 The server admins now have a variety of tools at their disposal to better administrate the players.

Players now can protect their player file on any server from other people. The system works by accessing the API of www.star-made.org,, and authenticating players over the site. Logging in to the site from the game is called "uplinking".

If you are uplinked, and log in on a server that has player protection turned on, you will only be able to log in as that player if you successfully unlinked as the account, that has first logged in with that player name. Only one name per account can be protected at a time, so if you change your player name, you will loose the protection of any other player name.This also protects server from players abusing admin powers by logging on with a player name, that they know is an admin.

I worked hard on bug fixes, server stability and performance, and our new Official US server (72.201.179.64:4242 ) finally runs pretty stable with 8+ players on it while only using a maximum of 1GB RAM, and a dual core processor.

A lot of stuff is already in queue, a new player model, custom skins, a database upgrade for 85% less size and faster loading, a docking system upgrade, a physics performance upgrade, a new shield system, a new chat system, a block manufacturing system, and much more

Thanks for playing StarMade,