This update features a upgrade to the core of the game, resulting in a huge performance boost.

I've took some time to go back to the basics for a new special feature, that will soon come. In the process of reiterating all the basic functions, I made some changes that have a huge impact on the performance of the game.

It's actually pretty rare, that people other than the one implementing it can see an actual increase in performance. But you will not only see it right away, it will make playing a lot more fun!

The game is now able to load a whole sector in seconds. Also a whole sector can now be displayed at once without any problems. Loading new segments (chunks) is now at least 10 times as fast, as it was before. The memory used is reduced to 20% from what it was before (which means, more stuff can be loaded). Also the memory, a sector needs on the graphics card has been halved, resulting in higher loading speed, as well as more segments, that can be displayed at once.

Here is a first look at a special feature that will come soon. Fully interactable, landable, and buildable planets: 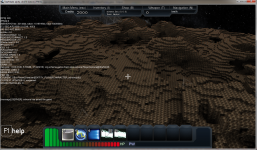 Thanks for playing StarMade,
- schema

Amazing! Keep up the good work!

I wouldn't say its a Spaceshooter Minecraft, but more of the ORiGINAL block game, Infiniminer

Infiniminer is what minecraft was inspired by.....

Voxels in space! I love it!