If you is a fan of oldschool games, you'll especially like it.

Key feature of the game is engineering levels from the blocks, mined in battles. By playing level players increase its rating and gives income to owner that he can use to buy more blocks, including unique (like block, wich angry by hitting, and can start walking throw the map burning players like in "War of the Worlds").

Our game will contain:

- a bunch of fun and strange weapons and battle items;

- different game modes from odinary deathmatch to the teamplay like Dota2 and Team fortress;

- a lot of level blocks with interesting properties;

- level editor to build out of blocks mined in combat;

- customization and grinding your character;

- unique customization elements to buy in she shop;

- improved graphic (now we porting game to Unity for that);

Now levels composed of the 6 blocks and 10 weapons. And this is a very small part of the final number.

We have ideas for more than 30 new blocks, 50 new weapons, variety of NPCs creatures and features. Players will affecting on what to create first.

In the movie you can see early prototipe made by flash not to show. We was forced to share it by news of the Greenlight closure.

English is not our native language and we will be grateful for an indications of the mistakes or ugly text in the discussions .

Thanks for voting and helping Shootbots online on it's quest to become the 2021 Indie of the Year. You are now in with a chance to score some free games. Help this game secure more votes by embedding the widget (or link) we have included below on your favorite sites.

Shootbots online is on Greenlight

Shootbots online is on Greenlight
Please vote us if you like our project:
Steamcommunity.com 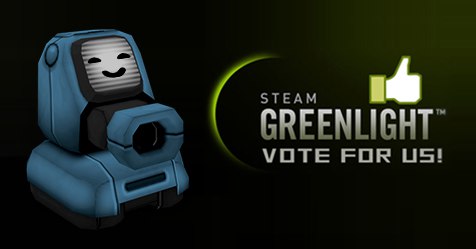 Testing of idea of the krip. What do you think?

Runs fast and stings the player, melting the armor by hot sting. Blue variation in addition to the usual damage briefly stuns by electricity.