Check out our crowd-funding campaign 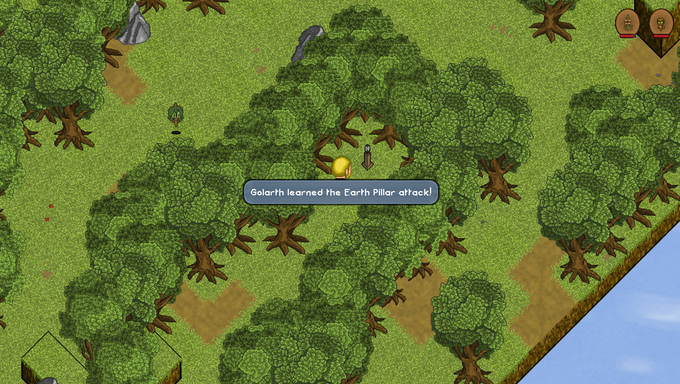 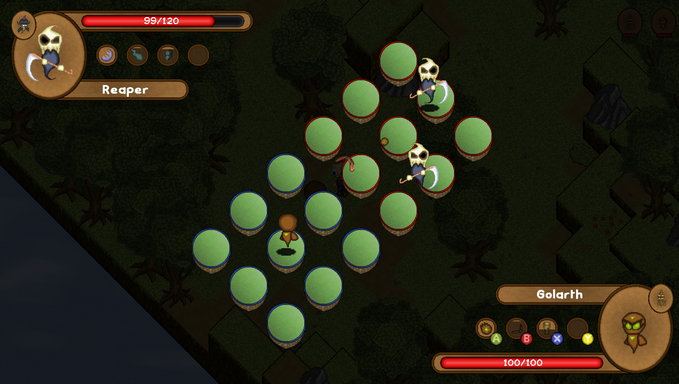 In Shaman Story, battles are fought in a 3×6 battle area. Half of that field belongs to each player. You can freely move your active spirit around on your side of the area to try to avoid enemy attacks or get your spirit in the right place for your own next attack.

Even though each player always only controls one spirit at once, they can switch around between the spirits in their team (which may consist of up to 3 spirits) as much as they’d like.

Every spirit has between one and four attacks. Each attack will use their own cooldown timer and have their own effect. There is also a general cooldown after each action in battle. If you chain multiple attacks together, that general cooldown will increase, giving your opponent a little breathing space.

Outside of battles you can customize your spirits attacks to your liking by using the orb system. This will strengthen them and sometimes even modify their effect. Each attack and each spirit belong to one of eleven elements, which will give them advantages and disadvantages against other spirits and attacks.

Spirits aren’t alive. That means, they are not able to train their body. Instead, they increase their experience in battle.

Or to be more specific: Every spirit has an active and a passive capacity, that will increase (slowly) by defeating opponents.

The player will obtain a lot of orbs during his adventure. These orbs are either spirit orbs or attack orbs. Every orb also has a complexity.

A spirit can use as many different orbs as the player wants, as long as their combined complexity does not exceed the spirits passive capacity. Orbs can always be taken out of a certain spirit and reassigned.

Attack orbs can be put into attacks. Attacks have a capacity too (just a passive one though), which will increase by frequently using the attack. Not only can attack orbs increase damage, range, speed, etc., but they might even change the attacks effects (for example with the right orb a basic shot might heal the user by a small percentage of the output damage).

As already mentioned in the spirit section, a spirit can have up to three attacks besides its base attack. Each of those attacks has a base complexity, which – combined with the complexity of all included attack orbs – makes the total complexity of that attack. The active capacity of the spirit decides how powerful an attack can be if the spirit is supposed to use it.

There are spirit and attack orbs that are especially strong and can only be used by evolved spirits. This means, if you devolve a spirit, it will lose all those orbs and any attack with those orbs. Of course attacks and orbs never get lost. They simply go into your inventory, so you can reassign them.

Spirits are what the whole game is about. Players can bond with them and train them. With enough training, they can even evolve into a second, more powerful form.

They don’t have a level. Instead, they have an active and passive capacity that will increase (slowly) through winning battles.

Attributes are not increase automatically either. Instead players have to use the orb system (see orb system).

Each spirit type has it’s own base attack. It doesn’t do a whole lot of damage, but you can use it repeatedly in very short intervals. The base attack is the only attack that can’t be customized. It will get stronger with the spirit though. If the spirit evolves, so does its base attack.

An evolved spirit can be devolved back into its first form to give a little boost to active and passive capacities. But after that it will take a while, until it will evolve again.

Certain orbs (the very strong ones) can only be used by spirits in their evolved forms.

Each spirit can learn up to three additional attacks. The orb system page explains how exactly those work. The more you use an attack, the stronger it will potentially become.

Those attacks are not spirit bound. That means, you can always take them away from one spirit and give them to another spirit.

To promote Shaman Story and grow its popularity (top games), use the embed code provided on your homepage, blog, forums and elsewhere you desire. Or try our widget.

An early demo of our game. There are some bugs and it doesn't represent our final game in regards of content!

An RPG sim where you are in charge of a city where you can attract new players and help them fulfill their ambitions!

Winterfall is a sandbox RPG influenced, gameplay-wise, by experiences as diverse as Mount and Blade, Mass Effect, DayZ, The Sims, the Elder Scrolls games...

Inspired by RuneScape, Melvor Idle takes the core of what makes an adventure game so addictive and strips it down to its purest form!