Report RSS It's been a long time...

And if I remembered any more significant lines from Portal 2, you'd have them right here. However, New stuff. That's got to count for something, right? Right?

I have done little to the game in the past few weeks. But now... I have done a little more to it. Will it ever forgive me? 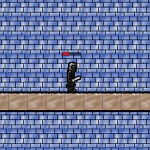 This is the first addition to the engine. A health bar for enemies! This makes it considerably easier to kill them. Well, not really, but at least you know when they are dying. This particular knight was injured by none other than ye olde hand grenades. These lacked any code others than the explosion effect just an hour ago. Now they deal out considerable amounts of hurt. The piece of code that draws the health bar is actually really simple, with two rectangles... nothing fancy, but it gets the job done. It only shows the health bar when the enemy is hurt, which is a rather neat effect. While I was on it, I also corrected an error which would kill the knight too early. 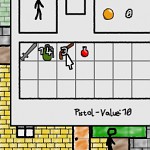 This was one of the more complicated things to add, took me three or four attempts until I got it working as intended: When hovering over anything in the inventory - or merchant's menu - it displays the name and value - or price - of the object. Except for the held weapon, of which only the name is shown. Also new: It is now possible to un-equip weapons. That is not as easy as it sounds. Well, I guess it could be easier, but I'd have to recode the inventory yet once more for that, so... no. 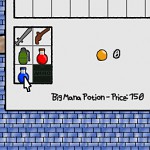 Essentially the same as above, just as mentioned from the merchant's menu. While I was on it, I also fixed a few bugs such as animation glitches when dying, I added a feature to cancel dialogue. Let's put it this way: Most of the things I did you wouldn't even notice, but you would certainly miss them if they weren't there.

Ah I like the name over things + price, sure helps a lot, as well as that health bar.