By all means, Scribble is supposed to be nothing but a platformer. And I dare say it does a pretty good job being just that. No story, no fancy graphics, just jumping and running and occasionally dying.

First of, I will not apologize for not having updated in over two months. Simply because I had better things to do, like finishing Halo 3 and ODST or graduating from high school. Probably especially the latter. I guess I still could have made a lot of progress, were it not for one simple flaw in the door code. I'll explain later.

So, on with the more obvious stuff: 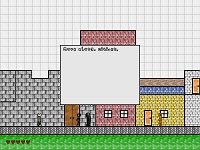 This is a regular guard. Nothing new, nothing fancy. But, if you were to hit him... 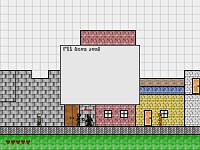 Bam. He and all his fellow guards in this room will turn hostile immediately, actually even while the dialogue box is still open. Luckily their AI and some other pieces of code prevent them from hitting you more than once, if at all, provided you're not too slow. 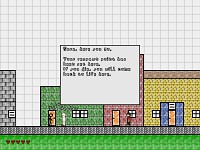 You've seen this before. He's a healer, he heals you. Big deal, didn't I already talk about him? Well, yes and no. I made some slight adjustments for the code to accompany changes to the gameplay. Now, healers act as checkpoints. I can also, with one simple line of code, deactivate such a checkpoint so that the healer only heals. Did that with the one in Tutorial Mansion.

Okay, this was actually very much it with the stuff you could see when playing. So now some of the things that happened in the jungle that is the code to this.

What was a major annoyance from a very early stage on was that in order to place a door in a room, I'd need to get the X/Y-Coordinates of the spot where the player eventually was to land in the next room. A few days ago, I had an epiphany - which was the only real reason why I even continued. Rather than giving the door coordinates in room X, I now tell it to teleport the player to door Y in room X. Took some experimentation, but now it works just fine and is approximately a lot% faster than the old concept.

Remember that map I posted a few months ago? No? Good. Because in order to keep at least some of my sanity (if that is possible) I will rather set for a slightly (read: a lot) more linear style. Diotburg - the first city - got reduced to a whopping three rooms in that process. This will make the game far less confusing for both the player and, which is at the moment more important, me.

And in case someone is still a little confused, I added red arrows that appear next to a valid route when one gets close enough. I figure this will come in handy in the forest and I know it already comes in handy during the first jumping puzzle, if you even want to call it that.

So, I can obviously not promise to make more progress every day, but now that the most annoying thing about the level design process is pretty much corrected it is far more likely than before that I will get somewhere some time. But then again, I'm currently unemployed, so I have a lot of time and no excuse. We will see.

And if I remembered any more significant lines from Portal 2, you'd have them right here. However, New stuff. That's got to count for something, right?...

In case you're wondering...

It's been quiet. Too quiet. So turn the volume up, will ya?

The game is only just released and I am already working on a second part? Surely, I must be kidding!

This is the most awesome ModDB-moment I ever had. My first release. Yeeah! System requirements: I have no idea, really. It is reported to work on Windows...

A demo version featuring a few - really just a few - levels to outline the basic gameplay.

Tell us your secrets oh great one!

The meaning of life is life itself. Enough of a secret?

best idea for a game i have ever seen. Its fun too

You make that sound like it's a bad thing. Despite the name, it is a powerful tool which, in the right hands, can produce absolutely great results. Not that mine were the right hands, but you get the idea.

...and yes. Game Maker. Got a problem with that?

Suggestion though: Add some impact effects (both sound and graphical) to have that 'feel' of the character that falls onto something. About those red dots however, make it more alive (by adding short animations to it.

Nice platformer so far, keep up the good work. :)

Tags
Embed Buttons
Link to Scribble II - The Search for Skill by selecting a button and using the embed code provided more...