Scrappy's Shootout is a free to play multiplayer First Person Shooter being developed by Cardinal Game Studios with planned releases on a number of platforms. In Scrappy's Shootout players are transported into a virtual world where they are to combat both one another and robots in an arena setting to see who's the greatest of them all! Who is Scrappy? Scrappy is the main character of the game. He is the dude in the brightly colored suit and helmet. He is who you control whenever transported into the virtual world! That being said, it might be a bit strange to fight Scrappy, playing as Scrappy. But Scrappy is used to this. 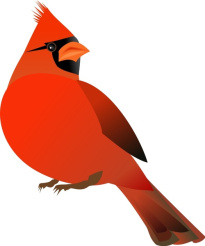 What is Scrappy’s Shootout?

For those that are just tuning in Scrappy’s Shootout is a casual first person shooter with an emphasis on simplicity while delivering an enjoyable experience. There isn’t much that’s special about Scrappy’s Shootout other than its casual nature and family friendly atmosphere. While the demo isn’t a perfect representation of what I’m going for it is fairly close. 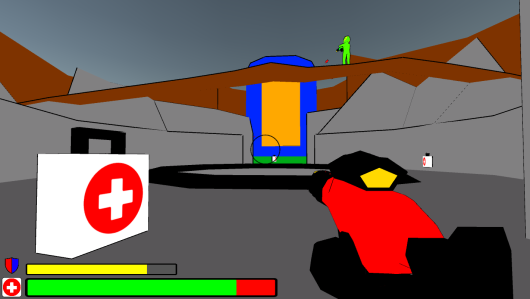 What’s In The Demo?

The game, in its current state, only has one map and one game mode in singleplayer. Multiplayer has not been implemented as of yet and three to four more maps for the game are planned alongside three more game modes: team deathmatch, capture the flag, and last man standing. The game does have controller support which you can find in the settings menu. Only one powerup, healthpacks, are in the game at the moment sadly. The bots in the game are basic and buggy, so be warned. The game will be better when facing others! There’s not much else. The game is relatively simple and you will see that for yourself when you launch the game. 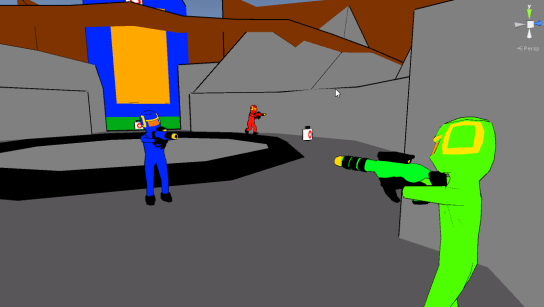 The primary reason I’m releasing this demo is to receive one thing: feedback. Please give me feedback on the demo. What did you like about it? What’d you dislike? Did you experience any bugs? Have a suggestion? Send me an email to CardinalGameStudios@outlook.com or Tweet at me @CardinalGS! All feedback would be immensely appreciated.

What’s In Store For The Future

In the future I plan to release updated builds of the game I’m currently doing. I won’t have a set frequency of how often I update, I still plan to do bi-weekly devlogs, but releasing will likely be irregular due to the size of updates. For instance, if one devlog I do a bunch of work on art, develop a map, etc, I will release that as an update. If in another I begin work on a multiplayer system I wouldn’t due to that requiring far more time to develop and test.

If you wish to stay tuned you can follow me on Twitter or check in on my site every now and then. Don’t forget to give feedback! Stay tuned!

In this devlog I discuss what major things I've accomplished in the past two weeks, the planned release date for the demo, the implementation of AI, and...

In this second devlog of Scrappy's Shootout I'm going to cover who Scrappy is, new content that has been added to the game, my plans for Ludum Dare, and...

In this dev log we announce Scrappy's Shootout, go over the gameplay, art style, release information, and show off what we've completed so far.

Once inside a sandbox First Person Shooter