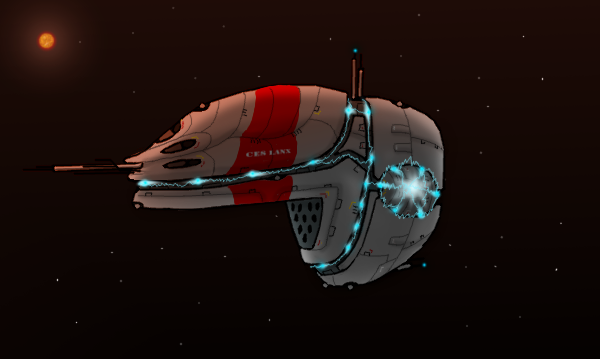 If there's one device in the Scaffold 22 universe that makes the plot - and its backstory - possible, its the Sub-Null core. These infinite cooling machines not only allow near infinite heat absorption but form the basis of several technologies and manufacturing procedures that break the fundamental laws of physics. The best known is REACH, a space-folding mechanism which enables vessels to traverse the vast expanse of the void at something resembling practical speeds.

While original designs were volatile and clumsy in implementation, technological progress over the five centuries preceding the events of Scaffold 22 have made personal - or at the very least communal - space flight practical without the need for static portal devices and high transit fees. Due to the inherit instability of these devices however, the Machine Temple religiously inspects any and all vessels capable of superluminal transit on arrival in Church space and confiscates any vessel which does not adhere to their arguably arbitrary minimum safety standards.

This almost draconian measure has made void transit safe - the pan-galactic REACH accident rate has fallen below one per cycle according to official Church statistics - but unfortunately does little to safeguard galactic society against abuse of Sub-Null tech in abominable flesh forming such witchcraft or necromancy, or heretical technology such as friction shields and monomoelecular blades. Unregulated use not only frequently interferes with authorized systems, but it can have any number of disastrous - and highly destructive - effects on the otherwise ordinary lives of the galaxy's inhabitants.