Disclaimer
Save Point is my entry for the 2014 Indie Game Maker Contest. According to the rules, the game is short (less than an hour). Since I wanted to focus on the mechanics more than the story, the game's story is very simple. It is also my first attempt at making a game on Game Maker Studio, so there might be some problems here and there. I got rid of a lot of bugs that would crash the game, so hopefully there shouldn't be any left. Anyway!

Story
A group of young hunters are trying to go back home after hunting a rabbear. Sadly for them, a terrifying beast blocks their path and kill them. Well, that's what they thought anyway; they don't seem to be able to die. Trapped in the forest, they decide to look for another path.

Gameplay
Save Point introduces a dynamic battle system mixed with a classic ATB system. The player has to choose an Auto Action, which will automatically cast itself repeatedly until the player changes it. This Auto Action can be any skill the player has learned before, but are slightly different than when they're casted as a normal Action.
Each character can have a maximum of 4 Auto Actions equipped. That includes enemies, who will use them as well. They won't target anybody though, as each party member generates anger towards enemies whenever they perform any kind of action.
It is worth noting that the game supports controllers (I only have an Xbox 360 one though, but it should work with others as well). Default keys are:
Enter/A: Confirm
Escape/B: Cancel
Shift/X: Special (used in battles to change Auto Actions)
Control/Y: Menu
If you don't like the default controls for the keyboard, please feel free to change them in the options menu.

Version 2 of Save Point is here!

Version 2 of Save Point comes with those changes: 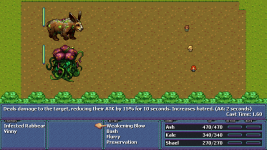 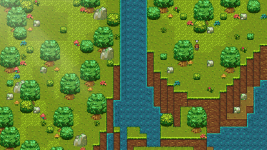 To learn more about Save Point, check it out here on indiedb!

This is the latest version of Save Point. Simply open the file and follow the instructions on the screen.

The game looks fun! Also, I'd just like to ask, how did you manage to code the player character to snap to the grid that smoothly? I'm trying to make a game as well (using the same game making software as you) and I can't get my player character to snap to he grid smoothly. He'll snap to the same tile space he was standing on if I press the movement button too quickly.

Indie
Tags
Embed Buttons
Link to Save Point by selecting a button and using the embed code provided more...