Samphi is primarily a story driven RPG set in a randomly generated, destructible sandbox universe. You will fight across many randomly generated levels, craft, build, level up and collect gear. Most importantly; you play the game how you decide. With 2 game modes, story & freeplay, you can either play through my story or create your own. Story - Samphi is a story about a relationship between 'boy' and 'girl'. Through re-living memories along the timeline of their relationship (all set in sandbox, randomly generated environments) you will learn their story. To do so you will have to master the art of crafting, survival, building and combat. Freeplay - In freeplay mode the world is yours. There is no goal, just sandbox goodness. Create your own world, live your own story and use your skills to survive. Samphi is going to soon be in an alpha funding stage and so you can get a good idea of what the game is going to become and grab yourself an early copy at a discounted price.

Add media RSS This is my house. (view original) 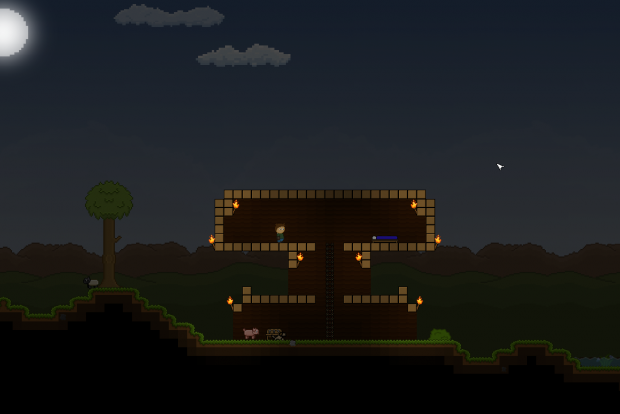 This is my house. There are many like it, but this one is mine.

Your pixel art style is very clean and simple, unlike mine which looks more 'natural'.
The background color is so soothing... :-)

Building a house. It's a weird shape!