A DARK MYSTERY IS UNFOLDING...

Delve into an unsettling adventure following the boy with a prosthetic face and a tragic past. In the first episode, Strange Neighbors, Sally Face and his father move into an apartment filled with odd tenants and an unfortunate crime scene. Little did they know what misfortune still awaits...

Unravel the sinister mysteries of Sally's world to find the truth that lies hidden beneath the shadows.

In this story-driven adventure game, players will interact with Sal's world and his nightmares. The main path typically requires casual effort. However, there are hidden layers to be uncovered that will invoke a bit of head-scratching, for those players up to the challenge. These include bonus mini games as well as additional narrative.

The game is broken up into short episodes, of which there will be a total of five. Episode One through Four are out now and the fifth is currently in development.

A dark mystery is unfolding on Nintendo Switch... Sally Face arrives on the eShop today, January 21st! Sally Face is a dark adventure game following a boy with a prosthetic face and his three friends, as they investigate a string of mysterious murders and supernatural happenings.

This release is a dream come true for Steve, who has been the sole developer on Sally Face since 2015. ”When I first started working on the game, my life was falling apart.” Steve says, “Sally Face saved me from a deep depression that I found myself in. It means everything to me to see people all over the world find a meaningful connection to my work.”

- ABOUT SALLY FACE -
A story-driven game, with a unique hand-drawn style, that deals with dark themes such as death, murder and suicide. Sal “Sally Face” Fisher uses his handheld video game system to speak with the dead and learn their stories. After a string of mysterious murders, Sal and his three friends discover something truly sinister casting shadows over their small town.

The dark mystery comes to an end in the final episode of Sally Face.

The fourth episode of Sally Face is out now on Steam, itch.io and Game Jolt!

Hi I have writen about SallyFace in a spanish translation of the best indie games: T.co

Sally Face is more than a game to me. I loved it ever since episode 1 was free, and no other game has quite made me feel quite the way this game has, in many ways. Steve's dedication is also extremely inspiring, and I can no nothing but appreciate him and his work. He's a seriously great guy that has created an amazing game, full of absolutely well written characters and a surprisingly addictive story.

If you want a story-heavy game that will leave a mark on you, play Sally Face. You won't regret it.

i cried so much on chapter 4. i cannot wait for chapter 5!

This game was amazing. Cried until I couldn't breathe while playing chapter 4. Steve, you've created something special here.

This is an indie game that is designed, written, coded and animated all by one guy.

I played the first chapter when it was first released. I wasn't actually expecting much since I'm not a fan of side scrollers but I was pleasantly surprised. I was completely engrossed and by the time I'd finished chapter one, I was desperate for more.

The characters are well rounded and engaging. The story is well written and compelling. The game navigation is easy to use and user intuitive.

Added to that, each chapter ends in a plot twist and cliff hanger that will leave you pulling your hair out.

I haven't enjoyed an indie game this much in a long time. If you read Steve Gabry's website he tells you how much of himself he put into this and the health problems it caused him. You can easily see this reflected in the high quality of the game. I'm glad he's slowed down and is taking time to enjoy life outside of development, but I'm so grateful for this game. It's completely addictive.

Join the community and let Sally face become your drug of choice.

This is an indie game that is designed, written, coded and animated all by one guy. I played the first chapter when it was first released. I wasn't actually expecting much but I was pleasantly surprised. The characters are well rounded and engaging. The story is well written and compelling. The game navigation is easy to use and user intuitive. Added to that, each chapter ends in a plot twist that will leave you pulling your hair out. I haven't enjoyed an indie game this much in a long time. If… 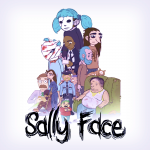