Welcome to Sacred City, a place where dreams comes true, and miracles happen.

Taiki Kuroda is a 15 years old middle-school student who recently moved out to his aunt's apartment, after many years of living in Tokyo with his mother. Because of some traumatic events occurred 8 years ago, his mother took the decision to take him to live with her in Tokyo, leaving everything behind, including his friends. He didn't have a chance to tell them the real reason behind his mother's decision.

Sacred City isn't a common place. Strange disappearances have been occurring in the past years, and no one appears to know who the culprit is or why these things are happening. There's a rumor though... One of many actually, which says that a person could end trapped in a strange place called the "Parallel Dimension", and this will happen if the individual in question permits the darkness to consume his heart, then having a heart full of hatred, resent, envy, egoism, and other bad feelings. These are vicious rumors, as some people in the city calls them, but what if they are true? And could this be related in some way with the strange disappearances? 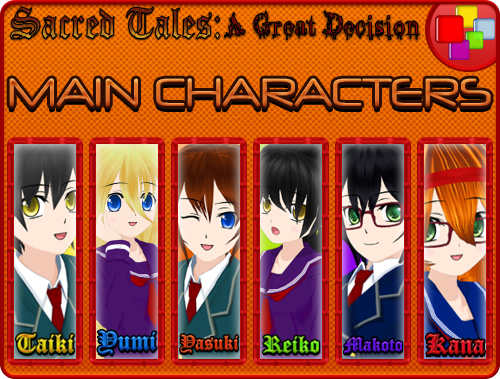 To promote Sacred Tales: A Great Decision and grow its popularity (top games), use the embed code provided on your homepage, blog, forums and elsewhere you desire. Or try our widget.

Please remember that this game is being released by episodes, but minor versions with fixes and/or improvements for the current episode will be released...

CyberThreat is an upcoming turn based RPG with a modern day setting. You play as a young man or woman going into their final year of study in a new school...

Create your character, choose your class on the fly and pick your gear as you fight through multiple ranks in the arena. Explore a beautiful moonlit town...

In Vitra is a fantastic role-playing game with a turn-based combat system. It will lure you into the mysterious world of Vitra.

A JRPG that is inspired by popular rpg, Odin Sphere. Mystic Tales is a platformer JRPG about a hero named Omayati and his team of allies known as the...

MonTamer is a game in which you can catch and train over 150 different Montams. Together with your Montams you'll travel a large and rich world, complete...