You're a robber and you're running. What else? Steal money from people, go inside houses and open safeboxes, jump ostacles and collect treasures and dollars running faster and faster because the night isn't so long! Dont't be too slow or reckless! Remember: the jail is waiting for you. To quit during the game tap "Be honest" in the top-right corner. To return back in the main screen (titles) tap the "BACK" hardware button. On start the game requires the permission to publish scores on your FB Stream... the game doesn't post stuff on your FB without your permission, you have to click/tap "Post score on FB" in the GameOver screen to publish your score. The game is installable everywhere (no x86 cpu in this version, but you can ask me), but I suggest a mobile device WITH separated GPU chip to increase performances (my older phone from 2009 has a gpu, the PowerVR SGX530 for example). 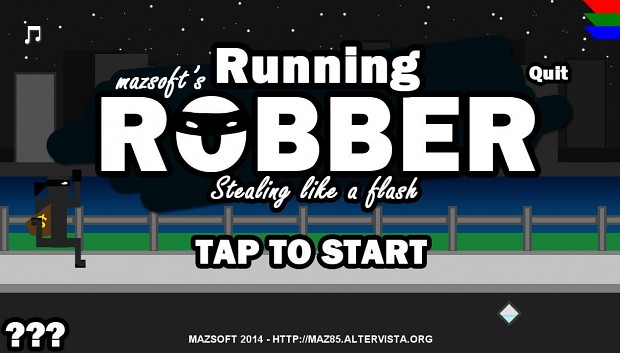