Rogue Republic is an innovative RTS project developed by a team of independent enthusiasts aimed to bring you a realistic yet intense C&C Generals-styled game you always dreamed about. Do not like C&C F2P for some reasons? Track Rogue Republic! The game will be released in episodes, with each episode bringing you a new campaign of the overall story arc ranging from Russian-Georgian conflict, hypothetical Turkish-Ukrainian war in the near future, WW3 and its falloutic aftermath. 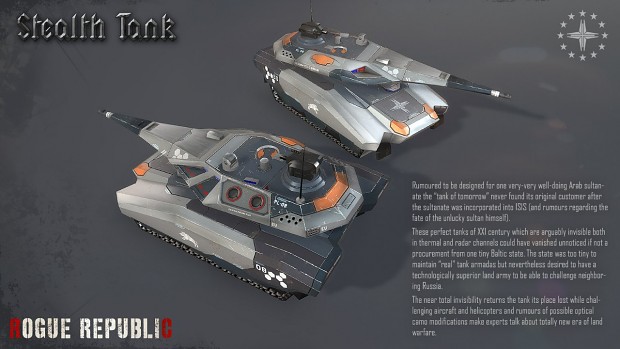 yeah, they need to give EU a proper camo scheme for their units.

The future is their camo.

The PL-08 Polish stealth tank. Which is literally the same vehicle as the Swedish CV9040120

So Saudia Arabia? Sultans aren't a dime a dozen anymore.

Rumored to be designed for one very-very well-doing Arab sultanate the “tank of tomorrow” never found its original customer after the sultanate was incorporated into ISIS (and rumours regarding the fate of the unlucky sultan himself).

These perfect tanks of XXI century which are arguably invisible both in thermal and radar channels could have vanished unnoticed if not a procurement from one tiny Baltic state. The state was too tiny to maintain “real” tank armadas but nevertheless desired to have a technologically superior land army to be able to challenge neighboring Russia.

The near total invisibility returns the tank its place lost while challenging aircraft and helicopters and rumours of possible optical camo modifications make experts talk about totally new era of land warfare.