Good games have vertical changes for the players to navigate. Tons of games have ladders. We wanted ramps. Ramps are hard.

Posted by SquishyGamesCo on Jun 3rd, 2015

We want the aliens to appear a civilized race. Lots of old games missed out on this opportunity; we didn’t want to miss it. The zeno race is really industrious. They build fortresses, factories, and cities. If we didn’t show those off, we’d miss a huge opportunity to show the player how deep the game really goes.

In preparation for a playable version that will launch tomorrow, we wanted to show what a zeno fortress looks like. And in building it, we had to build it smartly. As players, we often looked at landscapes and assumed they were all one piece, because that’s how they are visually presented.

After building the fortress, I’ve changed my assumptions. There are probably thousands of pieces where I see one. (And that estimate might be off by a full order of magnitude.)

Building ramps into the fortress provides a great explanation for this. 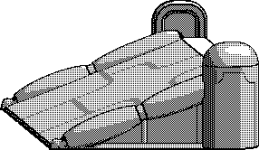 In order to get a soldier to go up ther ramp we had to consider a few things:

So how did we avoid this? (This is really bad). 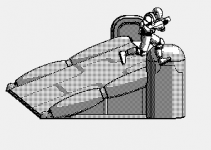 In GameMaker, an object can have only one depth, that is, different sections of it cannot be behind and in front of the soldier at the same time. So we build the ramp in two pieces:

and gave each object a different depth so we could show the soldier going behind the front segment and on top of the back segment.

We had a few other problems involving depth and movement of the soldier, so we added several more objects to control those things as well as collisions. 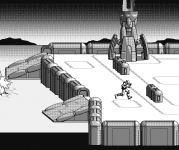 We’re excited to have a playable segment in your hands tomorrow.

Tell us what you think and whether the ramps work the way you expect.