"Balanced yet complex. The fun increases each update."
Indie of the Year 2014 I Player's Choice
Post news Report RSS Megabots coming to Robocraft in 2014

The Robocraft devs have been working hard in 2013 to prepare the Robocraft game engine to support Robots of vast scale and power 10x the scale of the current largest Robots in game (and they are already very large). Here are some concepts to show how awesome they are going to be.

Posted by MarkDesignJammer on Dec 27th, 2013

These images are just concept images that show the scale and power we plan to support in Robocraft in early 2014. 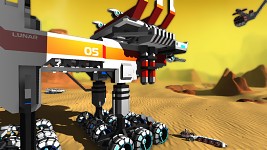 During the latter stages of 2013 Freejam (Robocraft devs) started working hard on a set of neat new technology that will allow the game to blow the limits on scale, detail and power of Robots that can appear in the multiplayer game. 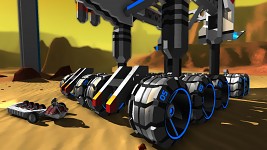 Of course these Robots will not come easy, and only the most dedicated and skillful users who have earned their battle badges and worked through the ranks will be able to build, own and master one of these mega boss Robots. 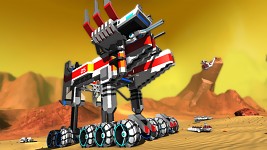 Robocraft already supports Robots with 1000's of cubes, but these changes will allow Robots with up to 100,000 cubes in to exist in game and compete in multiplayer battles. 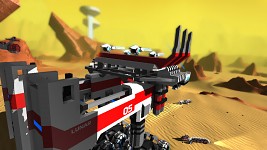 Team match-making plays a big role in game and owners of these Robots are likely to find themselves up against whole teams of smaller Robots who are all aspiring to build a Robot bigger and more powerful than your own.

Finally, here is a concept video showing the scale in motion versus some of the smaller Robots currently found in game.

Why not start building your Robo-point and Tech-point stash now so you can own one of these beasts early in 2014.

As a fan of Mechwarrior I support this wholeheartedly. Bigger is always better.

On a sightly different note, have their been any discussions on how tiering would be adjusted to fit these bad boys? I ask because I'm pretty sure this goes well above and beyond any tier 10 vehicle I've seen.

Yes, we will adjust the Tier as these changes come in. We may adjust the Tier boundaries, so it's tougher to get to T10, i.e. so only these bots appear at T10, or we may add extra Tiers.

The time it will take to repair those monsters, had best be less than the time people report repairing top tiers atm, some one quoted 40 min wait or 10k + rp repairs, looking forward to updates though.

Looks like they never added them. Hope to see them in the future though.

Confirmed for this month (Maybe february if there's an unexpected setback.)