Thanks for voting and helping Roadwarden on it's quest to become the 2022 Indie of the Year. You are now in with a chance to score some free games. Help this game secure more votes by embedding the widget (or link) we have included below on your favorite sites.

Posted by MoralAnxietyStudio on May 27th, 2019

In her Rock, Paper, Shotgun article, Jay Castello has mentioned:

The game’s genre is purposefully fluid. On (...) Studio’s website, the top frequently asked question says “I can’t figure out what is this game’s genre,” to which they’ve cheerfully replied “Me neither.”

The main goal of this post is to sink deeper into this topic: how could we label Roadwarden? And what it actually is?

By the way, during the next couple of days I want to update the game’s demo. It’s going to be awesome. 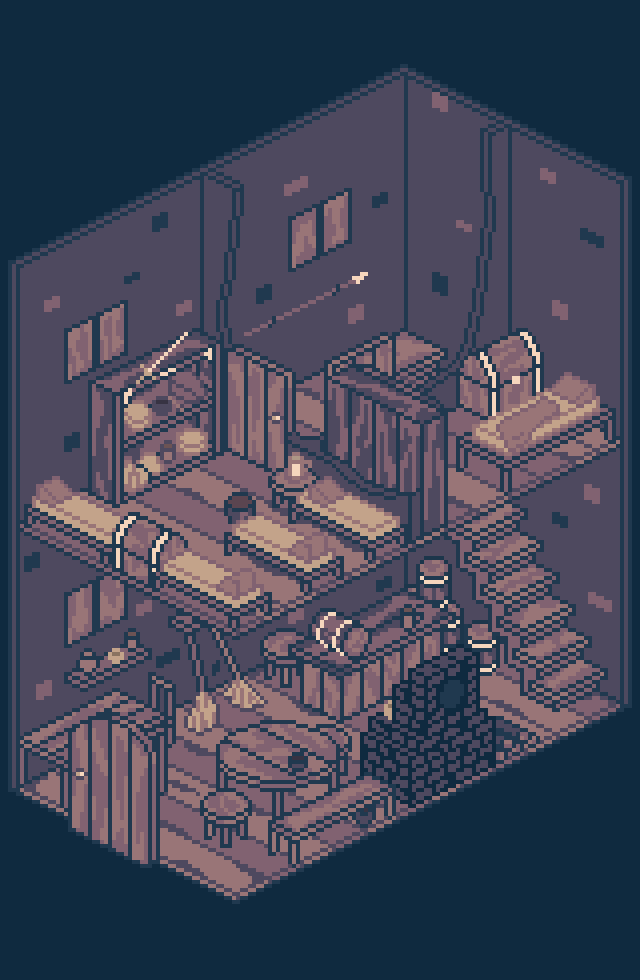 Why am I looking for a label?

Why is the label important? Is it just because it’s convenient for social media ads?

When we categorize a game, we also set up the player’s expectations. If we call a game an endless runner, we make a promise. We claim that it’ll be easy to learn and hard to master, with a very stable pacing, without pointless plot and accessible from your phone. Sure, some endless runners can diverse from this premise or even completely fail at executing it, but making this label is an act of communication. Here is what I have to offer. Are yo interested?

And while Roadwarden fits into various definitions of specific genres, it makes promises that are not as commonly associated with its labels. It has an experimental approach to role-playing. Violence, that’s always plot-related and significant, not grindy. Exploration of a grim, detailed and consistent setting, but not a very heroic one. Dialogues used as the core of the experience, not just a tool. Humble adventures of a regular person in a world that overwhelms it. And I try to avoid common tropes in my story.

And I never ask myself “is it OK to add this new feature? after all, it’s not popular in this genre!”. I add everything that helps me make a better game. I put the experience above the marketing convenience.

A term “video game RPG” is famous for being a very vague label, pretty much impossible to define. It’s one of the most diverse branches of gaming. Every person plays RPGs for different reasons, thou we could probably make a list like 1) a complex story with possible side quests, 2) some character progression (both story-wise and through XP-like mechanics), 3) combat and exploration. If you prefer western games, you’ll probably enjoy 4) having important decisions. And you probably like 5) fantasy, eventually science-fiction with fantasy elements.

Sure, there’s a lot of variety - we have action RPGs, text-based RPGs, tactical RPGs, dungeon crawlers, rouge-likes... It’s really weird that the same label somehow covers The Witcher 3, Undertale, Final Fantasy VI and Wizardry from 1981, yet not Far Cry Primal, but that’s because these games are classified by an objective definition of a genre. We just try to say: “if you like X, you may also like Y. they’re kind of similar”. 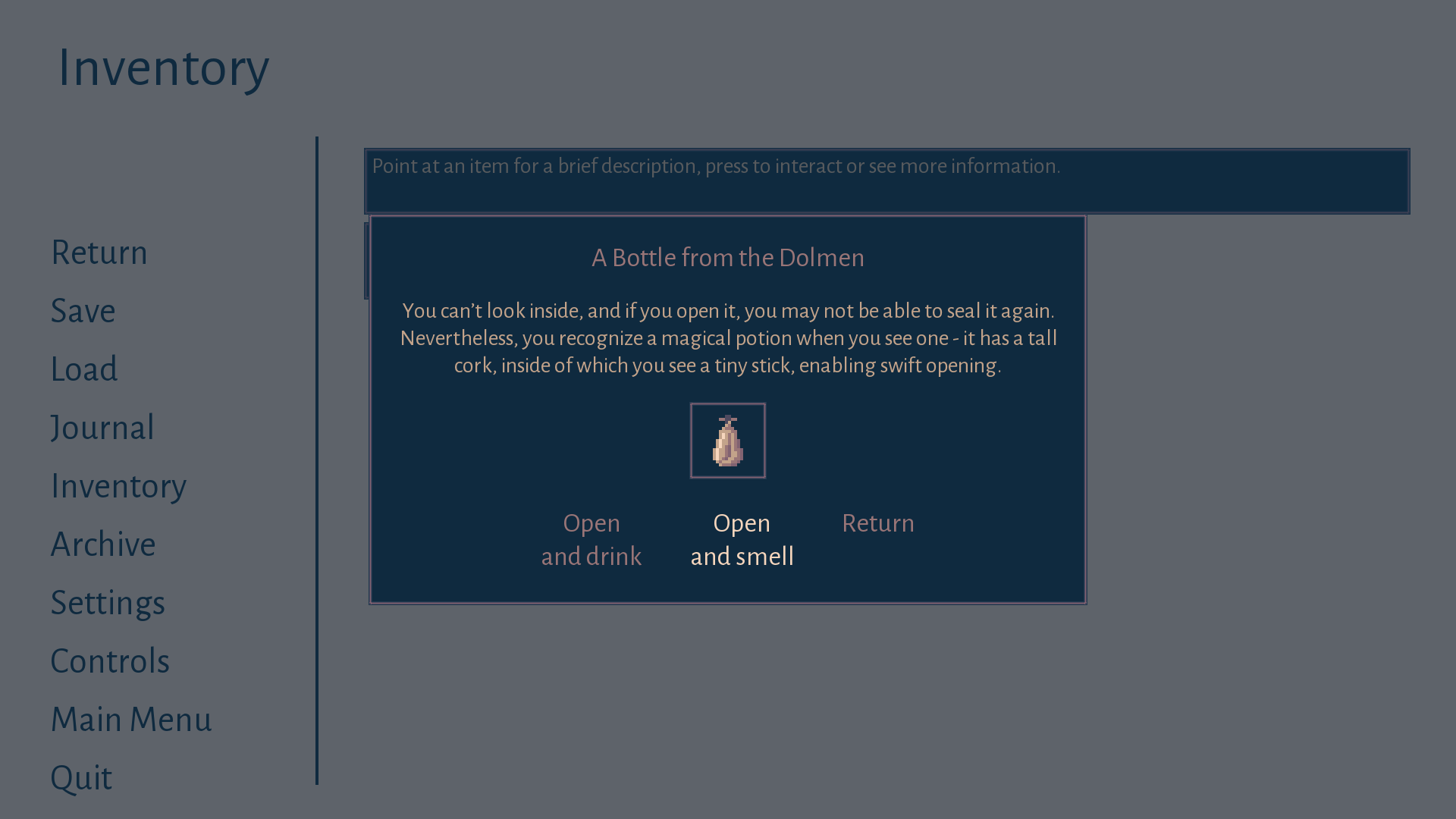 Roadwarden as an RPG

When I develop Roadwarden I’m interested in things that most RPGs consider unimportant. And I don’t mean something like “I care about story, and These Other Games are all about combat”! That would be a silly statement. But I put an emphasis on aspects of the story which are often marginalized.

For example, in most RPGs you simply kill things (in self-defense!) and grind XP to get stronger. You can kill 10 packs of wolves and 25 boars and it means absolutely nothing. You’re just overcoming a barrier while trying to get a new level or reach the other side of the forest. Killing these enemies won’t be considered animal cruelty. Won’t destroy the balance of the nearby forests. Won’t starve the villagers. These animals are not Really a part of the story.

In Roadwarden, bandits don’t randomly spawn and die without influencing the plot. They are not some random loot waiting to drop on the floor for the player’s convenience. They have families, friends, goals, story behind them. They don’t want to kill you - they want your stuff. And they’ll try to rob you only if they know you can’t beat them. Without an unfair advantage they wouldn’t put themselves at risk.

In my game, violence means something. Nobody here dreams about it, aside of the most terrible, wicked people. Every death leaves a void, and void should be haunting.

In most RPGs you find a tavern, buy a potion and leave. In Roadwarden you spend 15 minutes talking to the innkeeper, and he’s not there just to give you a quest. He wants to know more about you. He wants to know what news you’re bringing. And if you can be trusted.

Also, potions in this game are rare and have taste. And aroma.

Your character isn’t going to have one hundred thousand coins at the end of the game, nor murder two thousand creatures to save a village inhabited by 30 NPCs. They characters are not waiting for The Chosen One or a master of martial marts that can save them. You’re just someone who tries to change your own life by doing something risky, in a realm that’s filled with people who don’t even know if they want you here.

Your character is a part of the world they live in. And I think most RPGs don’t do a good work reflecting this idea. Immersion should be something more than the constant pursue of better graphics, cinematics and more “freedom”.

So while Roadwarden is still a game that includes combat, trade, exploration, unlocking new abilities and building your character, it’s all put in a new context. And there’s a good chance that a portion of RPG fans wouldn’t be satisfied with something this different. I try to encourage them to take a look... But I don’t want anyone to feel cheated. 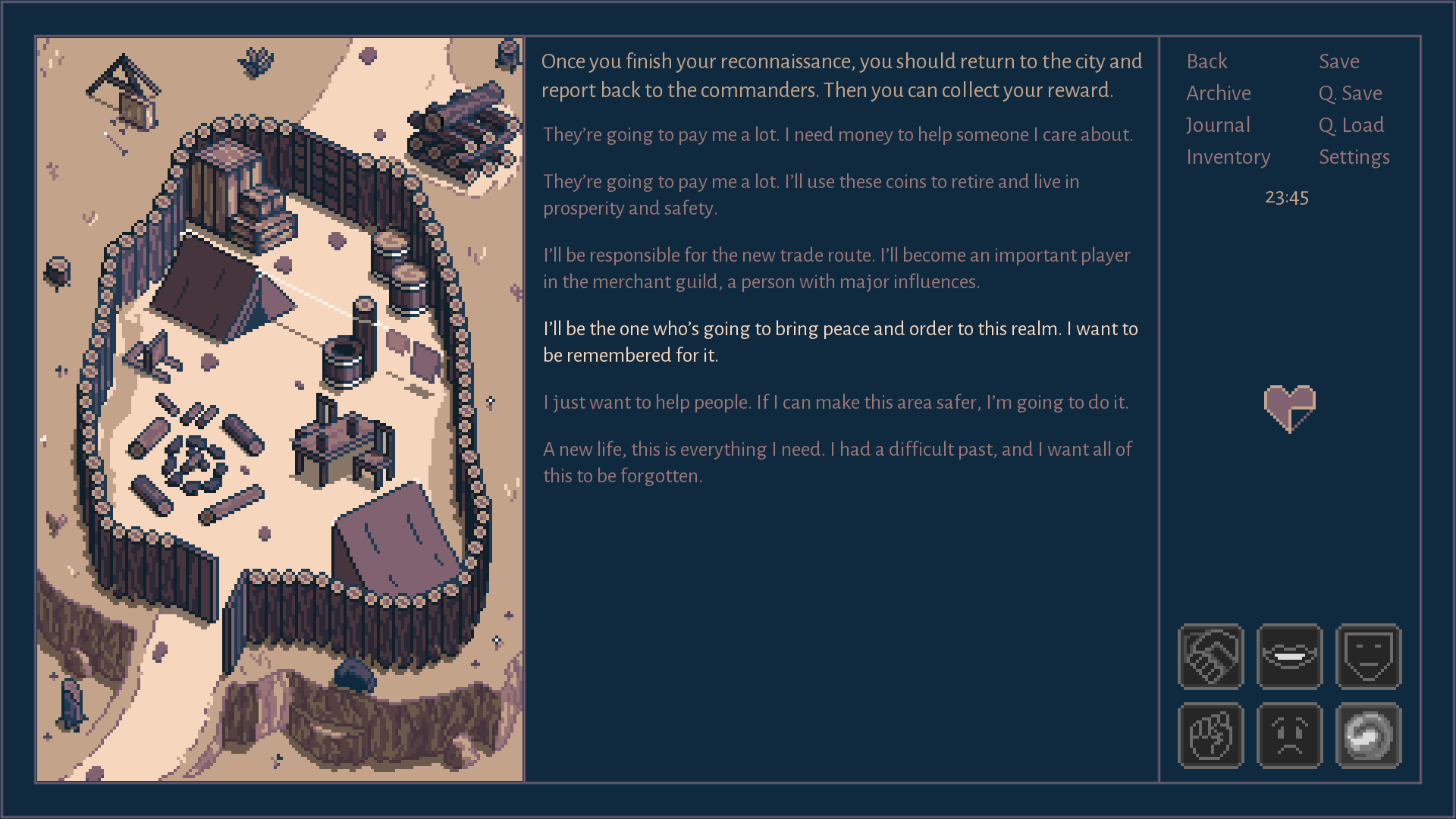 Roadwarden as a Visual Novel

Roadwarden may also not be a perfect fit for many Visual Novel fans, even though it involves a lot of narration, descriptions and dialogues supported by limited visuals. Roadwarden has fewer gameplay elements than most RPGs, but way more than most VNs - it even introduces simple survival mechanics.

Also, the story is non-linear - it’s very complex (what doesn’t mean “long”) and modified by how the player moves around the map. Many VNs introduce story branching, but I’m pushing it unusually far. And, of course, Roadwarden has way more choices than most VNs, even though some of these choices are focused on role-playing alone and don’t impact the game’s mechanics.

All these things push me into being very careful here, and I usually feel that I should say something like “it’s a Visual Novel, BUT...” 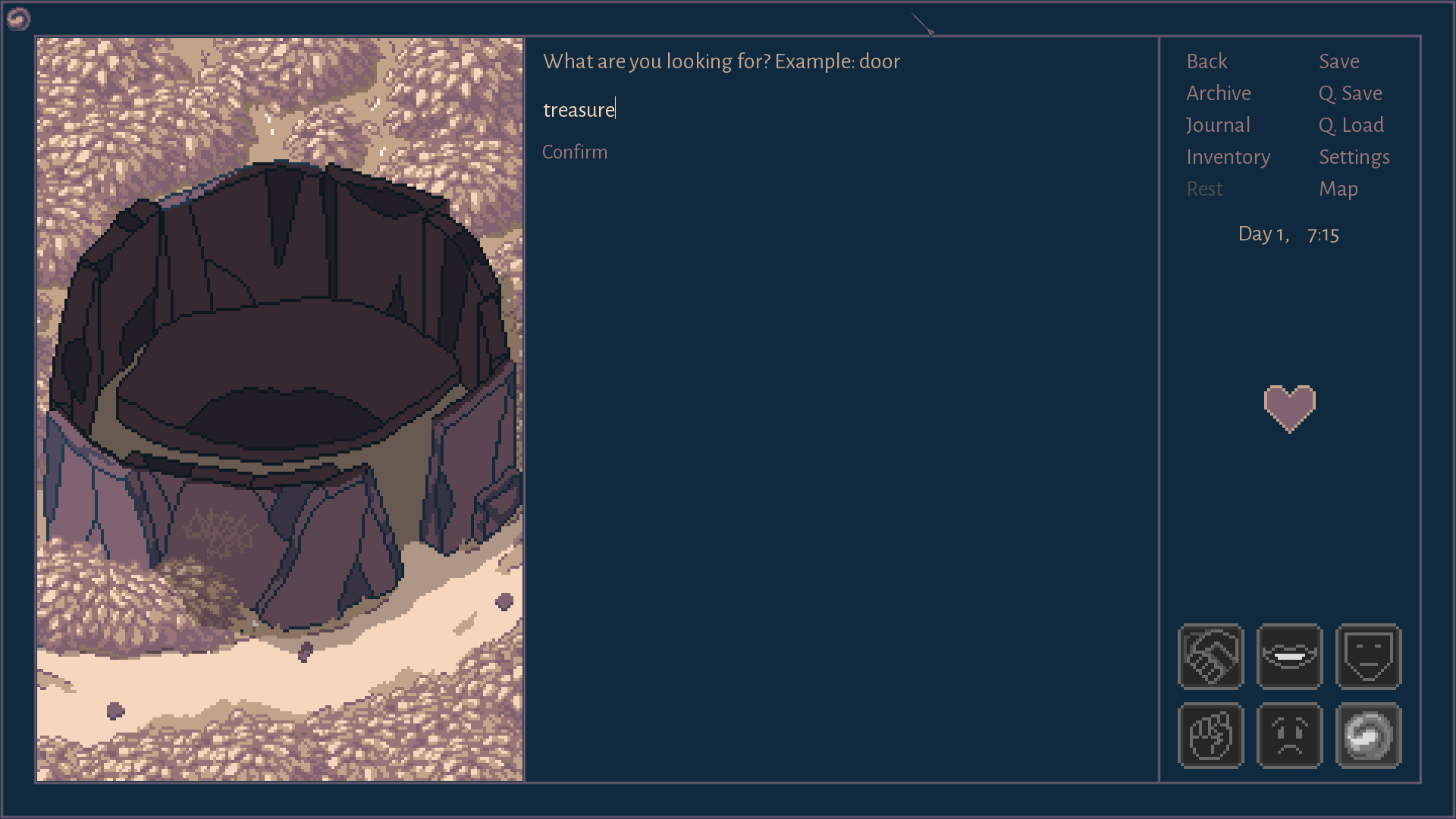 Roadwarden as an adventure game

So let’s make a step back. There’s an argument to be made that Visual Novels are a sub-genre of (or rather, an evolution of) a more interactive label. Here’s how Wikipedia defines the adventure games:

(...) a video game in which the player assumes the role of a protagonist in an interactive story driven by exploration and puzzle-solving. 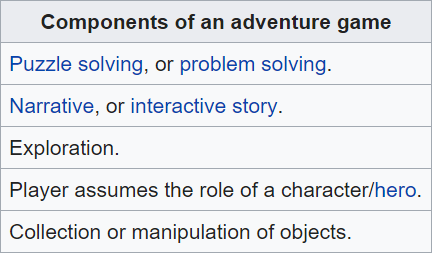 That works, doesn’t it? It’s also fair to say that such a definition is very vague and doesn’t even exclude RPGs or games like Half-Life. Quest for Glory series, for example, is usually considered to have “RPG elements” or gets classified as a hybrid of both an adventure game and an RPG.

This vagueness opens adventure games for many subgenres, and Roadwarden graciously falls into a couple of them at once. It has scenes with text parsers, typical for interactive fiction, but its advanced dialogue choices could even categorize it as digital gamebook (CYOA-like). Probably a better option for us is a “graphic adventure game”, since there are Some graphics and few ways to interact with the game - parsers, in-game “buttons”, dialogue choices.

I have a pleasure to be a part of few adventure game communities and there’s usually a small range of titles that are constantly mentioned as the “classic” adventure games. Point & clicks (Monkey Island, Grim Fandango), graphic games with parsers commands (King’s Quest), sometimes games like Myst...

Text adventure games, while accepted, are not really discussed often. And it’s difficult to make silly memes about them, so they are a bit obsolete. However, a group focused specifically on text adventure games really doesn’t care about graphics. 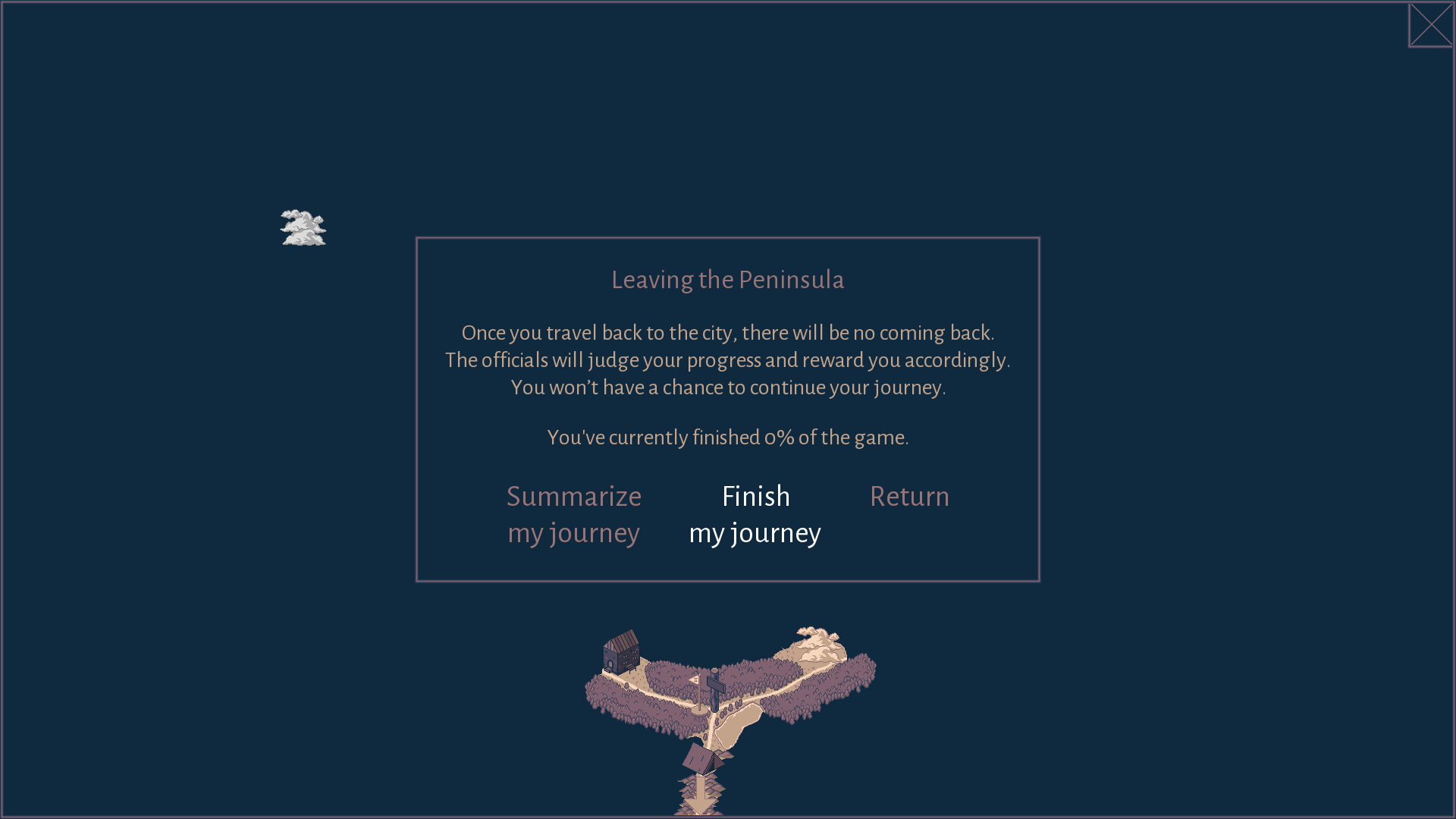 Roadwarden is a hybrid, and that’s not sexy

In conclusion, here are some of the genres that I think are strongly present in Roadwarden:

Also, I heard opinions that “it feels a lot like a tabletop RPG”. What makes me happy, since it’s intentional.

Some of my game’s features are not exclusive to any specific genre. All of the labels I’ve listed tend to be story-heavy and support their plot with dialogues (or even narration), often include inventory management, allow you to role-play a protagonist and tend to use fantasy settings. Others, however, are genre specific: parsers, open world exploration, mechanically progressing protagonist, simplified visuals, resource management...

Roadwarden is a hybrid, what means it’s going to have a problem appealing to fans of a specific genre. Yet, at the same time, it’s a game that’s not restricted by its labels - and I don’t think genres should limit our designs. My game can include all the things it needs. It can be unusual, experiment and creatively look for new ways to explore.

I just hope I can earn your trust. 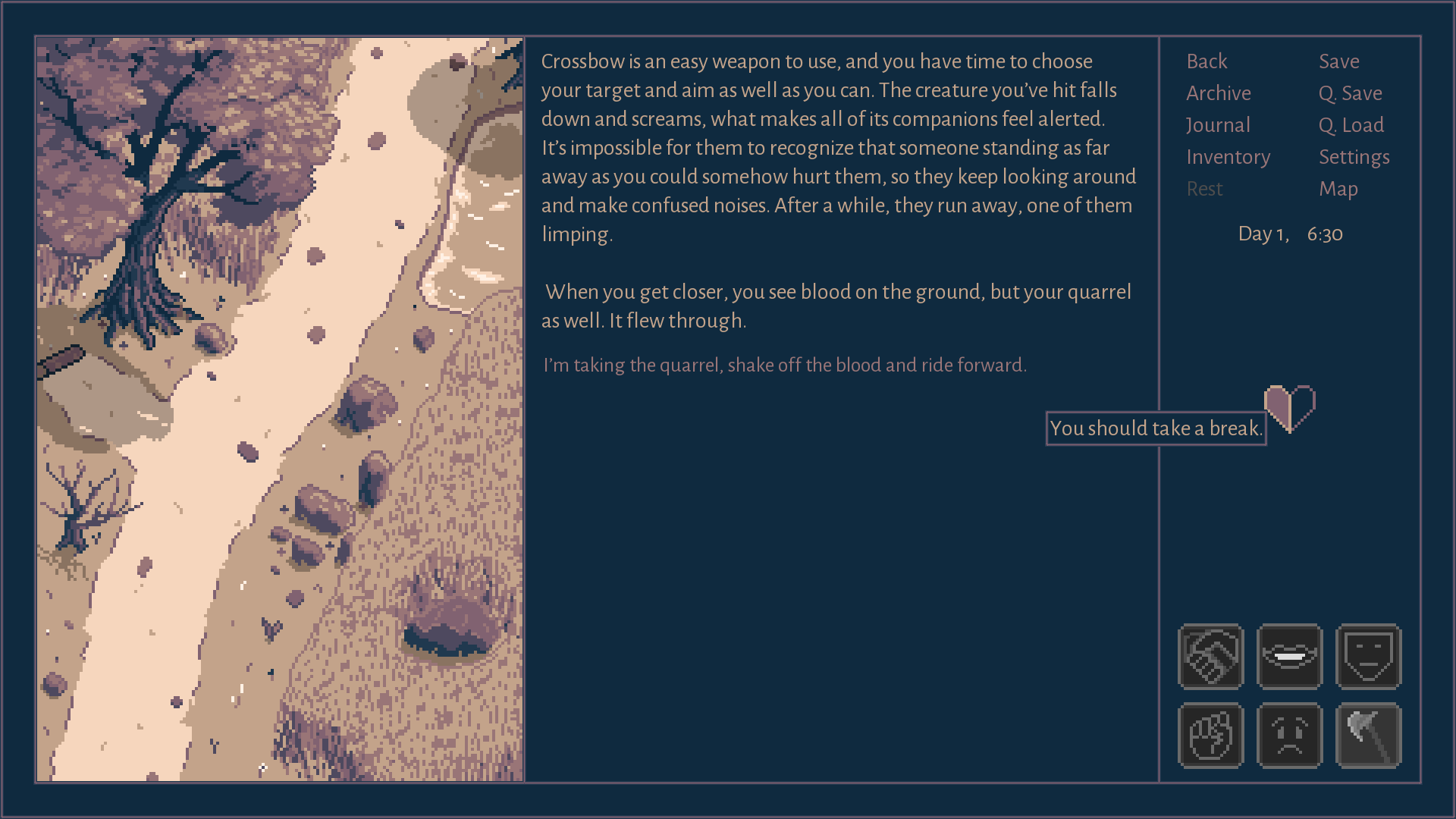 Whatever the genre, I didn't know I wanted this exact game until playing your proof of concept. Looking forward to this!

it's really an intriguing project, let's see where it leads :)