Red Spider: Vengeance is a Hong Kong Noir style Visual Novel.
It includes 6 story routes with each of the characters(approximately 105,000 words in total).
A sequel to this game, Red Spider2: Exiled has been released.

Yvet grew up as an orphan on the Mainland. She was taken in by a crime syndicate when she was young and trained as an assassin.
She killed many people, but she had her reasons for breaking out of that group. She escaped and married Francis, the leader of the Red Flower Society, an underworld mob that operated in Kowloon, Hong Kong.
One day, Francis was shot in a nightclub, and a doctor said that it was highly unlikely he would regain consciousness.
Yvet takes over his responsibilities and tries to find the person who was behind the shooting, with her bodyguards and a private detective she knew. 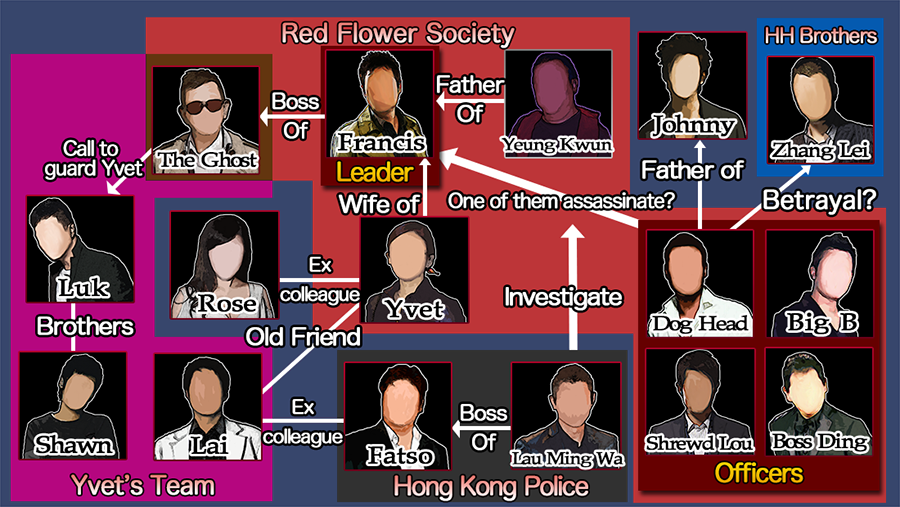 "I refuse to forgive whoever it was that laid hand on my husband. I'll do whatever it takes to expose them and send them to hell with my own two hands."

The heroine of this story.
She grew up as an orphan on the Mainland and worked for a death squad.
Francis's father, Yeung Kwun ,took her in after her breaking out of that group.

"Even if there's things I don't know about Yvet's past, I was prepared to accept anything, including things unknown, when I chose her."

Yvet's husband.
He was living legit working as a lawyer, but when Yeung Kwun died, he was pulled into a fierce struggle for succession amongst the officers of the Society.
He agreed to assume leadership in place of Yeung Kwun on Yvet's support and, 6 months later, he was shot in a nightclub.

"If the Boss accepted you as you were, and you allowed him to do so, then likewise it's your duty to accept that truth."

Francis's bodyguard.
He was also Yeung Kwun's bodyguard.
His loyalty towards the Red Flower Society is absolute. He is leery of Yvet and keeps some secrets from her.
He hired the Luk brothers to guard Yvet.

"I want to be the one who lights up your eyes like that. I don't want to see you fall back into the shadows again."

A private detective who assists Yvet.
He was a police detective whose life was saved by Yvet.
He's suspicious of the Ghost, who keeps some secrets from Yvet.

"If you've really become a monster who lives to kill, I'll accept the responsibility of ending your life."

A bodyguard hired by the Ghost.
He is a combat veteran, who has well build body and sharp judgment, but also he is out of touch with recent technology.

"I sometimes wonder if the nightmares would disappear if I learned to protect myself and others rather than always needing someone to look after me."

Luk's younger brother.
He's not good at melee combat, but he is a hacker who's good at programming simple spyware and hacking networks that aren't well secured.

"You know that trading in peoples'lives is a serious thing. If you can't show people you know that, your crew aren't gonna want to put their lives on the line for you."

An officer of the Red Flower Society.
He is a militant type who, unlike the other officers, was not afraid to charge into situations alone.

An officer of the Red Flower Society.
He is a shameless money-grubber known to use any means available to get his hands on cash.

An officer of the Red Flower Society.
He is a cunning man who wouldn't take the lead himself, but watches for opportunities and sides with whoever seems to have the upper hand.

An officer of the Red Flower Society.
He is an intellectual type and the brains of the Society. He makes his money in speculative dealing.

A sergeant of the Mong Kok police department.
He investigates the Francis' assassination.
He is a former colleague of the detective Lai.

Thanks for voting and helping Red Spider: Vengeance on it's quest to become the 2021 Indie of the Year. You are now in with a chance to score some free games. Help this game secure more votes by embedding the widget (or link) we have included below on your favorite sites.

To promote Red Spider: Vengeance and grow its popularity (top games), use the embed code provided on your homepage, blog, forums and elsewhere you desire. Or try our widget.

Devil's Journal: Tony T is a Visual Novel built upon the the player's freedom of choice, by having more than 30 endings where every single detail counts.

MMM is a visual novel murder mystery. The story takes place at a secluded mansion estate, where a gruesome murder unfolds and everyone is a suspect. It's...

This is our very first project, a visual novel set in the ever-famous city of Paris. A story of humanity, compassion, and yes, cats.

For nearly 15 years humanity has been subjected to the rule of another. The Ascended, an imperialistic race of aliens, invaded over a decade earlier and...

The dark story from the life of cats and people. Powered by Godot Engine.

They say the city's a roost for every bird. Detective Chirpums is more than happy to disagree with that. Almost as much as he is downing a bottle of Grackle's...