Rampage M is an oldschool style, top-down shooter with some puzzle gameplay added. It focuses primarily on singleplayer and cooperative multiplayer. We are making this game because we just love to make a game. We are not trying to compete with AAA game titles, but we do have an eye for quality.

The monthly report with our current progress. Not a lot this month, but we do have 2 pieces of art and some research on camera and controls.

Posted by klapstoelpiloot on Oct 7th, 2012

I am sorry to inform you that September has been a slow month with little progress. Some of our team members have been on vacation and another is struggling with illness. Fortunately, the vacations are over and we hope to pick up the pace in the next month. Keep in mind that this is still a hobby project, so even when everyone in the team is available, most of us still only work on this project in the evenings and weekends.

We do have a little concept artwork on the player character from Duc and an alien environment concept from Antoine! There is more concept artwork, but these are the only ones that are final and accepted as the direction in which we wish to go. Without further ado, here they are. 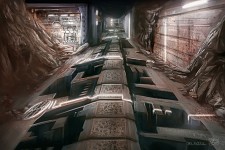 I (Pascal) have been researching game controls and camera behavior in other games and in open discussions on the topic to figure out what we would like. Obviously some people don't like a rotating camera, because it confuses their orientation or makes them feel nauseous. I personally like a rotating camera, because it better shows the graphical details in the game and gives a good view of the environment from all angles. But we don't intentionally want to limit our target audience to only those who like rollercoasters, so we were quick to decided that our camera will have a fixed angle. We may want to slightly alter the angle and the viewing height to get a better view of things though, but not at any cost.

Planning for next month

Next month we will still be working on our first playable level. There are Alien concept sketches in the works and also more environments. The new controls and camera will be implemented and the game engine should get support for point lights.