Rampage M is an oldschool style, top-down shooter with some puzzle gameplay added. It focuses primarily on singleplayer and cooperative multiplayer. We are making this game because we just love to make a game. We are not trying to compete with AAA game titles, but we do have an eye for quality.

Here is our monthly report on the current progress and a short bit on our planning for the next month. Last month contained a good amount of technical changes and additions, some management changes and artwork.

Posted by klapstoelpiloot on Aug 5th, 2012

Last meeting we have (based on discussions throughout the month) made some decisions on the gameplay direction we are going to take. We will be making this more top-down than 3rd person, because this simply has less technical risks and allows us to get away with less detail (and thus work). This implies no vertical aiming and such implication is correct. We won't have vertical aiming, because that would be just confusing to the player if we could make it possible at all.

This introduces a problem with stairs and slopes, because standing on a slope aiming in the direction where the slope goes up, firing a rocket launcher could potentially be lethal to the player. We will have to do some research into how we could best deal with this problem.

We also decided on a few features around cooperative gameplay and how the game will adjust the amount of enemies depending on the number of players (1-4) in the game.

The team has grown to 5 members! Duc Nguyen has joined us to work on some concept art and will focus mainly on characters and aliens. He has made a good start with some artwork on our main character. Three of those are shown here, out of which the bottom one is mostly the winner. This is a work in progress, so more to come next month! Allert couldn't wait and put together a prototype model already. 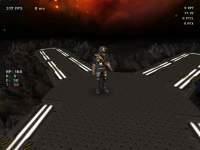 Previous month, Pascal created the initial version of the particle system in the game engine. Begin July he has connected this to the model system. A particle effect can now be attached to one of the attachpoints on a model and turned on/off during each animation individually over time.

Another technical change is the timing clock and time measurements in the game engine. The measurements were using 64 bit floating point (double) but appeared to be inaccurate due to the use of DirectX. Complete details on the problem are here. The internal clock has been changed to return only the time since the game started (not since the machine started) which allows us to work with much smaller values. Hence we could change time calculations to use the 32 bit unsigned integer for milliseconds or in some cases a 32 bit float for more accuracy.

Most of the month Pascal has worked on major changes in the level editing and the way how maps are stored and handled in the game engine. Previously we used Doom Builder with our own home grown plugin to edit levels, but our needs exceeded the capabilities of this editor. Now, we use a branch from the Doom Builder source code and are working hard to implement all the changes we need to make our wishes come true. This work will continue into the next month and possibly even into September.

While Antoine was on vacation in this month, he still has found the time to do some drawing on environment concepts for the game. The environment is dusty and focused around mining activities on a hostile planet. Pictures say more than a thousand words, so here you have one. 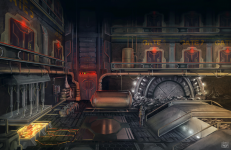 Yoeri has started on the game design and has come up with a good set of enemies so far. The document counts 16 individual monsters and that does not include bosses! We hope to get some concept art on some of these next month.

Because we are now a 5 man team instead of 2, emailing around just didn't work out as nice for our communication, so we decided to setup our internal forums. This is a standard phpBB forum with our own modification that allows us to link directly to our files on our shared storage (which is on the same machine) and for images it automatically creates thumbnails when inserted in a post. So far this has been working great, so that was a change we certainly don't regret.

Planning for next month

I won't go into too much detail on our planning for next month, because I don't want to promise too much and risk that we can't deliver :)

Work on the main character will continue. We will also start working on alien concepts based on Yoeri's descriptions of the aliens. We will start with the weakest aliens, because these are the first that we want to use in the levels (chronological order).

Also planned is a beginning on the storyboard and hopefully we can get some details on the first level of our game (level 1 !) and do some environment concepts for this.

On the technical side we will be working on the level editor and level structure changes. We have an experimental new feature in mind that (if it works) allows us to model walls and floors very fast throughout the levels.