We wanted to create a 2D action platformer but instead of just relying on a story and raw game play, we decided to throw in a lot more mechanics in the mix such as:

This will let players build their Character the way they want. With experience comes levels, ranging from 1-25. Experience is gained from killing enemies (each tier enemy has different XP to give, basically harder = more XP), loot and level completion. Once you exceed the XP level cap and beat the game you will unlock "Radical Mode" and the Radical version of the player you beat the game with. The Radical version of a character has a whole new attire/appearance, their original power concept is the same BUT is heavily modified and a new skill tree with ridiculously awesome perks that you definitely will need to attempt to beat Radical Mode.

The ability to level up comes with skill points [SP] and attribute points [AP]. Each level brings one of each.

With the up-gradable attributes (Health, Agility & Power Regeneration), the player will be able to set the character to his/her game play style. If you want to run fast, have fast power regeneration but lack some health you can, You want to be a support guy in COOP by upgrading health and regeneration of power but be slow, you can. This level of customization will make the player in control instead of playing in a fixed environment. 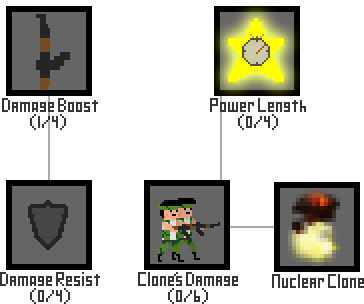 The skill tree lets the player totally transform the character. This will create a sense of being unique with your build. Is playing defense and having more abilities to help you not die your play style? Orrrr do you wish to unleash your wrath on the enemy with abilities to aid you in the destruction of them. Its all up to you.

Each of the 4 main characters have their own unique power. All these powers can be upgraded in the skill tree.

A man that goes by the name Dr. Fancy Face has taken over the world with his army and started conducting tests on everyone. Four of the test subjects were able to gain powers from their modified genetics and break out of prison to take out Dr. Fancy Face. After this act they have become known as R.A.D. , a group of Really Awesome Dudes.

As if fighting an army wasn't hard enough, during R.A.D.'s insurgent acts against Dr. Fancy Face, aliens invade earth and start killing everyone. Aliens also have a foreign bacteria that attaches to dead corpses and controls them like a zombie.

Each primary enemy has a mega boss (Humans, zombies and aliens). Once one is killed they are defeated. You must fight off the zombies and destroy the hives queen, launch into space to destroy the mother ship and come back to end Dr. Fancy Face's rule.

To get funded on kickstarter so we can finish R.A.D. and release it early next year.

We are just trying to gain publicity for it

what language this is being made? c++?

hahaha nice! i loved! want be the first to test

Thanks! The demo will be handed out all over social medea + Indie DB

A little shooter game with a 30 minutes life time. I've been inspired by CT : Special Forces, using its graphics and gameplay elements. It's just a demo...

Orange Santa is a 2D Christmas-themed Platform Action game based on the story of Orange Santa who is in-charge of the distribution of the Christmas gifts...

MilitAnt™ is an action-packed side-scrolling platform/shooter. Set in a world ruled by insects, a lone soldier ant must defend his home colony at all...

Fortune & Gloria is an action platformer where you and a friend (optional) save the day in procedurally generated missions!

The latest installment of the most famous arcade-shooting series brings a lot of changes: this time, you will not face Morden's army like in the previous...

Indie
Tags
Embed Buttons
Link to R A D by selecting a button and using the embed code provided more...