QUBE is a small rubber cube with an intriguing wish for adventure. Help him get through the doors of the world beyond the clouds by using physics and throwing him around dozens of platforms! QUBE features hours of challenging physics-based gameplay, lots of replay value and addicting levels. Each one of the levels require logic and skill to get through. Available now on the App Store for iPhone and iPad!

Thanks for voting and helping Qube Adventures on it's quest to become the 2022 Indie of the Year. You are now in with a chance to score some free games. Help this game secure more votes by embedding the widget (or link) we have included below on your favorite sites. 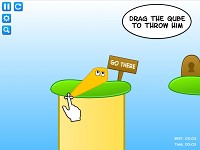 Independent game developer, Klaus Silveira, has announced that his skill-based action puzzler, QUBE Adventures, is now available for all iOS devices. Developed “by hardcore players, for hardcore players”, the game puts the player in control of QUBE, a small rubber cube with an intriguing wish for adventure. The objective is to help him get through the doors of the world beyond the clouds by using physics and throwing him around dozens of platforms, jumping obstacles that build up the QUBE scenarios.

Players take control of QUBE by dragging him around and releasing, letting physics take care of the rest. It's a hard game, focused on the player skills, although incredibly intuitive and fun on touch devices, making QUBE Adventures the perfect game to occupy your time, but be prepared to fight off your family for control of the fun. The game features hours of challenging physics-based gameplay, lots of replay value and addicting levels: simple stylized graphics, cheerful music and audio, as well intuitive gameplay, all coming together in an addictive game for all. 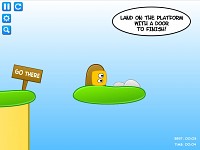 “QUBE Adventures is meant to be a hard game, but extremely addicting and intuitive in the same time. It's an easy game to pick up and play, but impossible to master…” said Klaus Silveira, creator of QUBE Adventures. “I wanted to create a game I would love to play, there's no reason in creating games that we don't enjoy playing. Money is not everything in this business, lot's of people out there should be listening to their hearts, not their pockets.”

Journalists interested in a promo code should immediately contact Indie Developer Consulting by sending an email to press@indiedeveloperconsulting.com. Members of the press are also encouraged to visit www.qubeadventures.com, and to follow the game on Facebook here: Facebook.com

QUBE Adventures has been recently released for iPod, iPhone and iPad and is available on the App Store. Since IndieDB is my favorite place for independent...

QUBE Adventures is now available on the Appstore!

QUBE features hours of challenging physics-based gameplay, lots of replay value and addicting levels. Each one of the levels require logic and skill to...