I've reworked the game's hint system, making it a whole lot easier for players to read the hints while on the move. Read more about it in this bite-sized development update.

Hey, everyone! Thanks for joining me in this mini-development update. But before we get to the meaty part, there's a short announcement I'd like to make:

Reaching for the shrink ray

I've been thinking about the way I've been handling news updates, and I've come to the realization that there've been way too few updates where I often had to cover lots and lots of new things in very long walls of text, which is probably a bad thing for those of you who actually like to see the way Quark Storm grows and gets ever closer to being a full game.

For that reason, I've decided to release shorter but more frequent news updates, which will let you all see the game's development in more detail as it changes and evolves over time, rather than one long post detailing the results of months of work all at once.

Now, with that out of the way, let's move on to the update...

While playtesting Quark Storm, there were many, many things I noticed from watching others handle the game. Some things were obvious, such as sections of a level that were too hard to understand or get through, even if you knew what you were supposed to do; however, some things were way more subtle, and it took me longer to realize those underlying issues the game was having.

One of those underlying issues was that some people, while playing, took a really long while to get used to the controls. For example, very few players actually remembered they could even brake except for the two or three times the game actually forced them to use it. That was partly because the game didn't require using the brake that often, but it was also because of the way the hint system was implemented.

Hints used to be kind of hard to read while
moving all over the place like this, I'd say

As you can see in the above gif, hints used to be static, which meant players would have to stop and stay still for a while to be able to read them properly. Since the game is about jumping around at high speed, not many playtesters stood still long enough to get to read the hints, which resulted in crazy things such as some of them trying to make it through the brake tutorial in level 1-1 without even realizing there was a hint stating they were able to brake.

Since the issue seemed to stem from the fact that the game wanted you to keep moving while the hints wanted you to stay still to read them properly, the solution I've come up with was to make the hints stay on a fixed screen position while you were inside the area which requires them. That way, you'd get to read the hints even while moving around, regardless of speed.

The new hint system is composed of a single text that's parented to the camera so that it stays onscreen at all times, and with a simple fade in and out effect for the text. 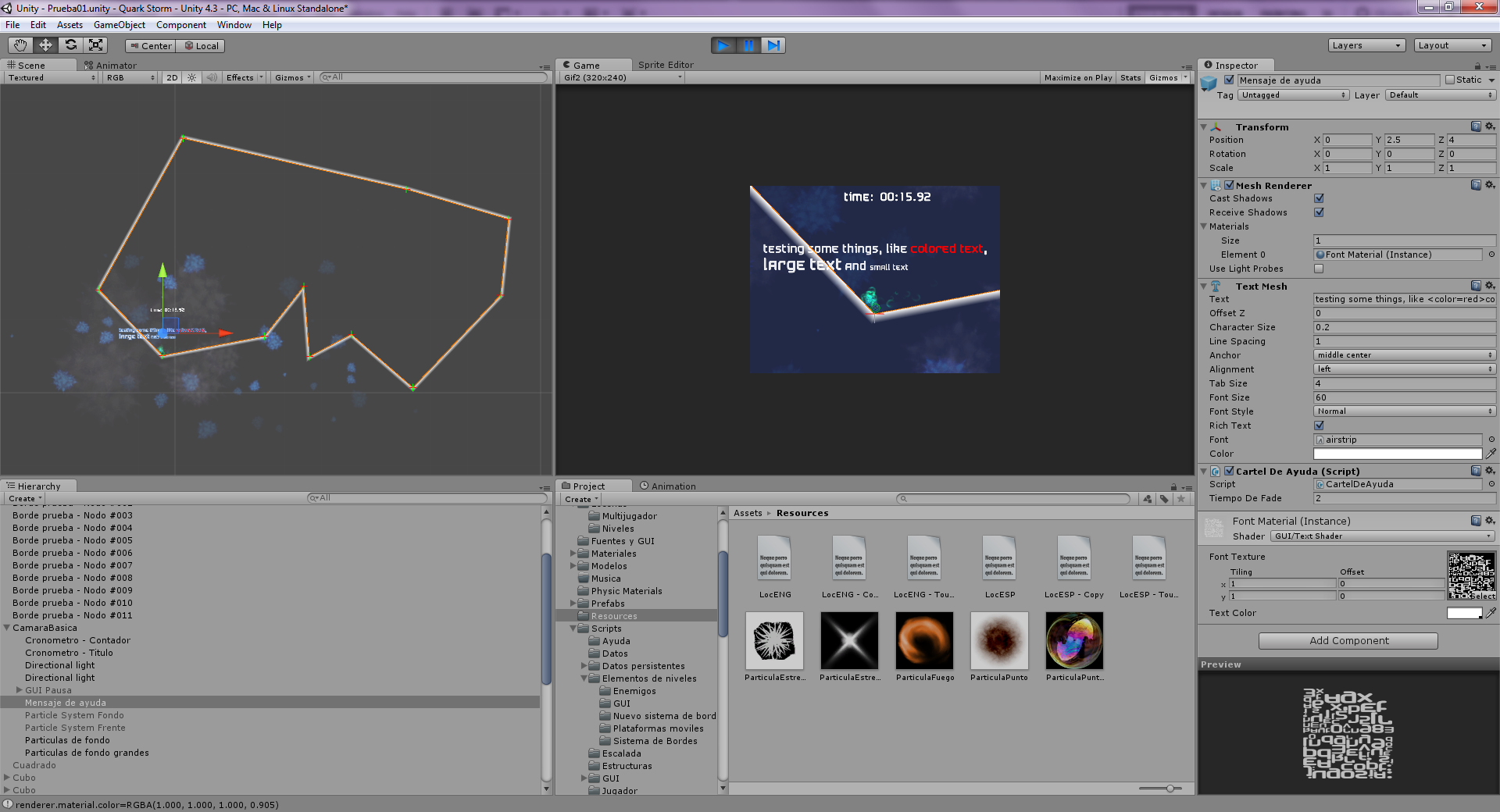 Here's the hint text object as seen in the Unity editor

The second object I've made has a trigger area with a message attached to it, and tells the hint text manager to display that message when the player enters the object's area of influence, and hide it when the players leaves. Simple, and gets the job done. 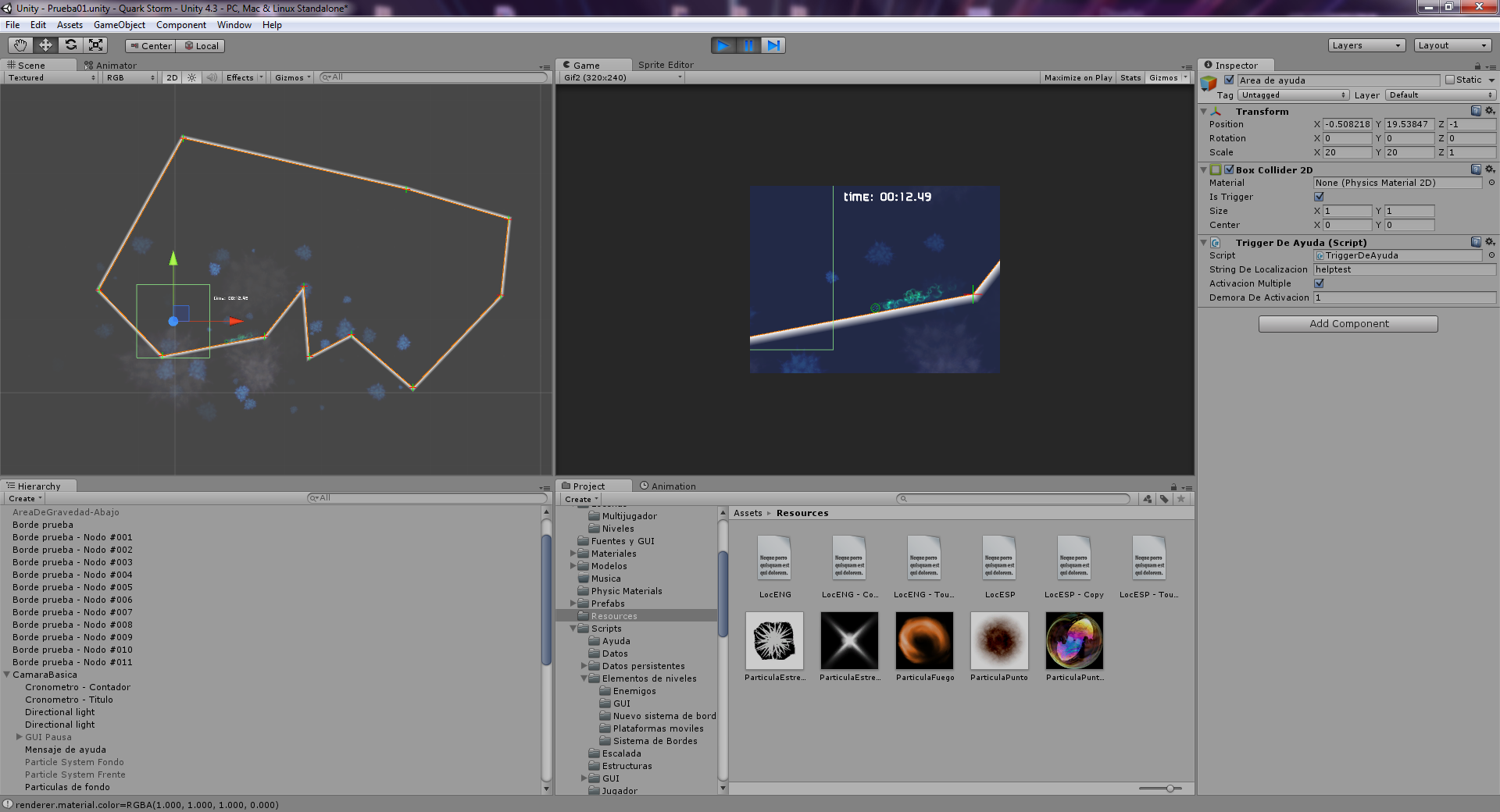 Here's the hint area. The green square is the trigger's area of effect

With both things in place, the hint system was born! Here's what it looks like now:

Here's a test with the updated hint system test, alongside
some basic rich text features, such as font color and size changes

Well, that's all for today! This week, I'll be building a set of small tutorial levels to better teach the basic game mechanics, some of which will probably be ready for playtesting them locally this weekend. I'll probably upload a new alpha build of the game once I've gotten to iterate and polish them a bit more, so please stay tuned!

is there any way we could play it (or test it) for now?

Hi, and thanks for your comment! First and foremost, I apologize for the late reply, but I'm still not used to the way comments work, so I didn't know you had posted this question until I checked my news articles out today.

The latest demo is a bit old, as its a build I released before updating the physics and all that, but it can be found here for Windows, MacOS, Linux and Android (for both smartphones and tablets): Indiedb.com

I'll be releasing a new demo once I feel like I've made enough progress to show something worth your while, since I don't want to rush it and have it come off as a rushed and cheap build. Please bear with me and look forward to further updates!