QuadSmash is a frantic arcade game with a strong multiplayer orientation. Players control crazy-fast vehicles battling against each other in epic matchups. Your vehicle can ride upside down and emit shockwaves, it has an energy grapple and a powerful dash to smash the ground. The main game mode, and the most enjoyable, is called “Smashball”. It’s a ball game in which each team must score in the opponent's goal. There is also a Deathmatch mode (actually a “last one standing”) for more destruction-oriented games. QuadSmash also features a full single-player campaign.

Get a taste of QuadSmash LAN Preview!

Last week we released QuadSmash 1.2.0 with 5 new arenas and lots of improvements across the board. Today, we’re proud to announce the availability of QuadSmash LAN Preview for PC.

What is it?
The LAN Preview allows playing QuadSmash over a local network, with multiple computers. It’s a preliminary version intended for testing. We’d like you to try it out and send us all the feedback you have. We’ve completely rewritten the game engine, as well as the user interface to better accomodate network game setup and provide an awesome PC experience (with mouse support, yay!) 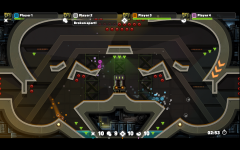 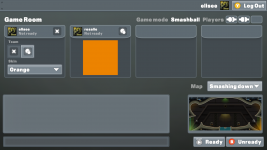 The build is available to everyone who purchased the full game (it’s still time!), both through Desura or standalone at our Download page. Remember to tell us what you think!

QuadSmash 1.2 is now available on Desura, featuring new maps and fixes! Read the full post for the (exciting) changelog.

Control crazy-fast vehicles battling against each other in epic matchups. Your vehicle can ride upside down and emit shockwaves!

No updates for a while.. Are things still moving forward for this indie? I love playing it as a couch-party game on the 360, but I've been putting off re-buying it on Desura because of the announced future online multiplayer.

(Sorry to reply so late) I was the main developer on QuadSmash. The company where we were developing it closed down a couple months after the release sadly, hence the lack of updates. I'd love to make a spiritual successor someday, but I don't know when or if I'll get the chance (currently busy with lots of other projects)

How can we access to the multi mode on Desura plz ?

Very interesting and original game :)
Will it be free or have an inicial charge?

It's already available for 400 MS Points on XBLIG and $7.49 on PC. We'll be releasing through Desura very soon too! For now you can grab it at Quadsmash.com (there's a free demo)