We've been working on Proven Lands with a super small team for some months now, creating a game in you become an explorer - not just another sandbox item collector. Packed with the real mysteries of physics, biology and chemistry, plus tons of (hopefully) reasonable science-fiction, influenced by Star Trek, Don't Starve and Project Zomboid.

In Proven Lands survival is our strongest concept. It starts with a stranded astronaut -- you. You fight hunger, thirst, strange animals, weather and even the nature itself. Give the pre alpha demo a try, attempt to survive for a few days. Right at this moment you’re able to eat everything with your helmet on (for demonstration reasons) but because we aim to be a hard sci-fi game in the future you’ll have to take off your helmet first before you can eat anything. Your initial spacesuit is weak and old. However you’ll need an armored one to survive against stronger animals and armed aliens later on – oh, and you’ll need better weapons than an axe.

As soon as you’ve mastered the first terrain biome (desert), there will be plenty to discover such as steppes, savannah like environments, forests, big rivers, caves and different planet types such as ice or volcano - each filled with tons of items and characters. The AI game master will watch your influence in a region so after some time more intelligent animals, and perhaps even aliens will start to attack you. First off though we start with simple alien villagers and introduce you to a rather basic storyline. And, because it’s a sci-fi survival game, build devices, smaller machines, factories and before you basically upgrade your “camp” to a small one-man outpost -- similar to an advanced camp in Don't Starve, just deeper, bigger, and more sci-fi. 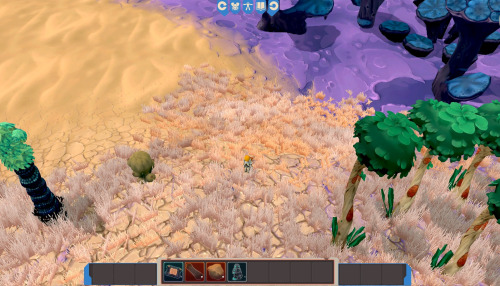 A typical (old school) roguelike base on traits. By “traits” I mean traits like “hungry”, “sleeping” or “toxicated”, but also “friendly” or “experienced in laser pew pew”. The Sims base on traits too, btw.

When you create a new character, what we like to do is to let you choose between “constant character traits” such as “human”, “firefighter” or “cosplayer”. All constant traits give you certain bonus or malus. We could call it “classes” sometimes, but not always.

The second category of traits are “dynamic traits” or “moods”. These are traits such as “fever”, “lunatic” or “pregnant”, or “wounded”. You can stack some of them up to five. For instance, a wound has a chance to grow to fever, but five wounds will certainly cause death soon. When you fight an enemy, if he hits you, you loose health points, but you might also get a “wounded” trait, if it was a critical hit. A “wounded” trait is like an open wound, and you need to figure out what to do next. Combat buffs are such dynamic traits as well. Even if you die, you don’t die just like that -- there’s a “dead” trait that can be caused by many other traits by a probability of x %.

The last category of traits are the so called “diplomacy traits”. Technically speaking, these are character traits, but they appear a bit different in the game, even though they act like character traits in relation to other characters.

The diplomacy system of Proven Lands base on a value range between “ally” and “hostile”. You have a diplomacy rating to everyone and everything intelligent in the world. This makes modding so awesome. For instance, predator animals are hostile to you while cute birds are friendly. The sheep likes the wolf, while the wolf hates the sheep, because sheep doesn’t hate anyone *period*. If the wolf hates the sheep, the sheep will run away if it’s too weak to defend itself, where the wolf will attack the sheep on sight. If the wolf is hungry, its diplomacy rating gets a big malus so it attacks more frequent. And so on. I believe it is a simple, but powerful and dynamic system.

Proven Lands is by far not as complex as Dwarf Fortress, but I hope you like how we try to add some depth to your character, maybe in a more procedural or dynamic way than many other games. The idea was to give depth to the world and characters with a tiny team, by being smart, creative, systemic. So is the diplomacy mechanics a system of its own. But once you get how the system “cascades” between you, regions, villages and individuals, it is hopefully more interesting than the usual enemy spawning or scripting. 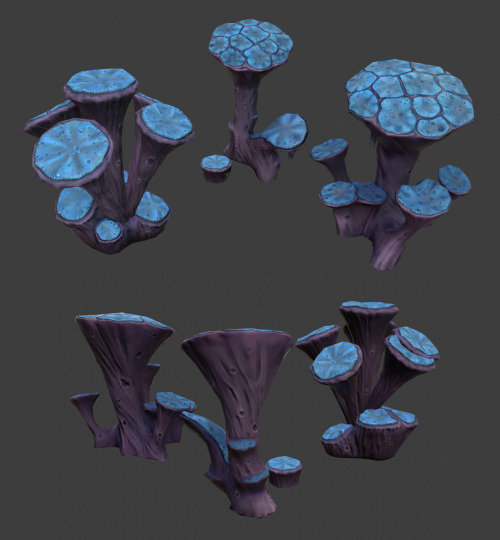 Alrighty. I hope you enjoyed this tiny mechanics introduction. So what did we do in the meantime? A lot of background work, actually. Jeffrey added more variation to the space suits and alien concepts. We will show more of then when we are done with. We had some fun with the new insect animations. And… Anastasia works on more of these fantastic trees. Do you remember those old blue trees in our game? We finally found time to add more of them. I’d love to work on the new ground textures as well. And I hope to find some time to show some of those new effects next week.
Five-by-five, Rafael

Sursday Dev Update: Why our trees are influenced by anime, comics and pixel art?

Trees are fundamental to our understanding of forests, but also to the way how we look at deserts, swamps and even cities, right? But in games, trees...

Rafael here. Last weekend I’ve met Oskar (hey there!), the creator of a cool city block demo, for a coffee, and we talked a bit about the voxel engine...

Another Dev Update: Plants, Hiro Isono and “Heart of

Today we'd like to talk about the “real” Robinson Crusoe, “digging” and about some progress we made in the last few weeks.

Will there ever be a kickstarter, or? =o

The fact that you put a screenshot from "Outcast" earned you a tracker.

Love the art style, the gamepay elements look entertaing and it will have a lot of ways to expand.
But please, Show signs of survival mre often, I allready though the poject was dead.

is this game still happening?

Fantastic idea! Tracking and will check out the Kickstarter too. :D