You are a Research Engineer aboard a large vessel named 'Aurora', with a crew of 130.  Aurora has been tasked with finding new worlds to colonize and develop, and one day she finds one.  This unknown planet showed some interesting scans, ship wrecks; many of them, too many to ignore.  Whilst in orbit, an unusual burst of energy comes from the planet and envelops the Aurora.  Aurora loses power, lights go off and the humming sound of the systems fade, Now without power and in a destabilizing orbit, the Aurora is lost and you find yourself boarding the nearest escape pod. You launch, you brace, and impact into the planet.

Post news Report RSS What is there to do, in Prospect? [Part 3]

You, are Jesse Enner; a Research Engineer aboard a vessel called Aurora, tasked with seeking new planets to colonize and develop. Explore the surface of an unknown planet, survive its harsh weather conditions and find a way home.

In my previous news story, I spoke about finding Escape Pods and the interactions you might have with them; today I delve deeper into that interaction and explain how important Escape Pods are to Jesse and his survival. We know that they are the games checkpoint system, and the player will be able to enter them for shelter and rest; the equivalent to passing time or sleeping in games such as The Elder Scrolls V: Skyrim.

So, let's start with the context menu. This is what you see when interacting with an Escape Pod from the exterior. From left to right, we have slots for a Power Cell, Oxygen Tank and a Nutrient Tank. The fourth slot may be occupied by another item, such as a message log. 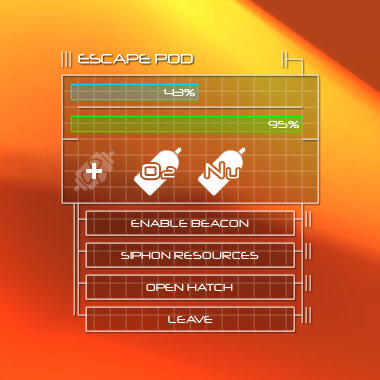 In this Escape Pod, we can see an Oxygen and Nutrient tank installed but the Power Cell is missing. This means that anything in the pod that requires power will not enable, such as the beacon. All items used in an Escape Pod (bar the fourth slot) carry a charge, that charge is persistent across various inventories.

The next thing to discuss is the 'Siphon Resources' option. Clicking this will transfer available Oxygen and Nutrients to the players suit storage. It will only transfer the amount the player needs to fulfil their resource capacity.

'Open Hatch' is the option we use to Unlock the hatch of the Escape Pod, providing there is power to do so. This allows the player to enter and exit the pod freely. I will talk about escape pod internal interaction at a later date.

The Power Cell, Oxygen Tank and Nutrient Tank are a few of the items you'll find in the game and they have further use than just with Escape Pods. Power Cells can be used to power and activate doors, for example and Tanks can be recharged with resources elsewhere. Here's a video showing the interaction described today.


I have uploaded a second build for people to try out and hopefully give some feedback. Is there anything that you think doesn't work and that could be different, or have you simply found a bug? If so, let me know.