Project TERMINUS is a survival horror VR FPS in the mighty city of Paris, taking inspiration from the Half-Life, Bioshock and Alien Isolation games. It is playable in VR and on pancake (desktop).

Paris, 2021. You are in the subway, commuting to your home. You watch the city from the window of the train, the weather is clear and you can see a beautiful sunset reflecting on the Seine.

The apparent calm hides a deadly threat. Soon your train suddenly stops, the power shuts down and the panic takes over the city. You receive a message from your scared little brother elsewhere in the city and the network dies too.

Trying to get out of the now dark and gloomy subway station of Bastille, you discover a creepy cloud floating in the corridors. It is composed of million of miscroscopical particles, moving in a swarm.

You just met the deadly nanites. They are everywhere, the city is descending into chaos, the army is placing checkpoints, and destroys bridges to stop the attack. None of its action seems effective.

The day the nanites are dormant and use solar energy to get power. The night, people and animals are eaten alive by the swarm.

Will you survive ? Will you find your brother ? Will the humanity be able to overcome this threat ?

There are two ways to play this game : in VR 6dof, in VR 3dof, or on a regular monitor.

In VR 6dof you will be able to grab objects, open doors, hit enemies with your own hands and live the fall of Paris in the most immersive way. We take the most of the 6dof controllers given by the Oculus and Vive gear to make you live the game.

In VR 3dof you will play with regular controllers or keyboard but you'll have to ability to immerge your eyes into the game. We developped a stream technology to send the game content from your computer/console to a smartphone, or an Oculus GO. That way you can play VR with a weak computer and without the expensive gear.

Without any VR system the game is still fully playable, like any other FPS. You're not forced to play in a immersive way.

The game will have multiple type of gameplay sequences :

- Shooting sequences : people eaten by the swarm are aggressive as their nervous is the first target. They are little by little under control of the nanites before being fully consumed and abandonned partially decomposed.

- Timer sequences : when touched by an infected, you can be infected as well. You will then have to find a way to cure before being fully under control of the swarm. They are made out of metal, use this at your advantage.

- Puzzle sequences : in the collapsed subway you often will have to use in the best way possible every object you have at your disposal in order to go forward.

- Dicussion sequences : When meeting characters in the game you will have the ability to discuss with them. The discussions will have multiple choices and can end in several ways. Say the right words and the character will give you items or informations. Say the wrong words and anything can happen.

The centers of many cities on the planet are the scene of deadly confrontations between populations and assimilated, in a world very similar to ours at the beginning of the attacks. The story will take place mainly in the city of Paris.

The city will gradually become a large quarantine area where the only livings are survivors, assimilated and military forces.

The enemies of Project TERMINUS come from a combination of robotics and biology. They have been contaminated by swarms composed of billions of nanites that will take control of their host by replacing the functions exercised by the brain of the individual, which kills him.

These swarms are a constant threat in the quarantine areas seeking to infect as many livings as possible. The origin of these nanites is unknown even though several theories are advanced by many people.

The game is aimed to be released in VR (HTC Vive, Oculus Rift / Rift S, Oculus Quest) and desktop.
You will be also able to stream the game on your smartphone in order to use it as a VR headset for your computer.

1 oct. 2019 - Start of the project
Artworks design, research and benchmarking on controls and gameplay of the game, definition of the scenario and the lore

28 nov. 2019 - HIGH SEAS release
Development and interactions experimentation of interfaces systems and interactors in VR with the game HIGH SEAS available on Sidequest

April 2020 - Kickstarter campaign launch
From there, this is up to you

We are Jérôme, Michaël and Mehdi, three devs passionate about VR gaming and gaming technologies in general. We created our game studio in 2018 and been working as partner for several customers and companies making immersive learning and training.

After making some VR experiences and trying interesting way of interacting in VR, we decided to truly launch our main project.

Don't hesitate to get in touch with us. We'll be glad to discuss about the game or anything else ! 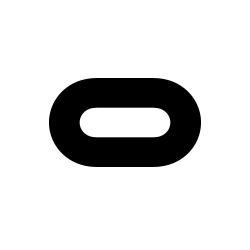 The free Alpha Demo on Oculus QUEST is out !

Terminus is a FPS action / horror / survival with Half-Life vibes. The game will take place in the city of Paris, suddenly submerged in chaos, when an invasion from unknown sources breaks out in the city. Paris will gradually become a large quarantine area where the only livings are survivors, assimilated and military forces trying to investigate on what’s happening.

First of all, we want to let you know that everything you’ll see in this video is not set in stone as the game is far from being finished.

We wrapped up this playable demo to show how the game has progressed so far. The demo is downloadable in the files section of this IndieDB page, or on Sidequest : Sdq.st 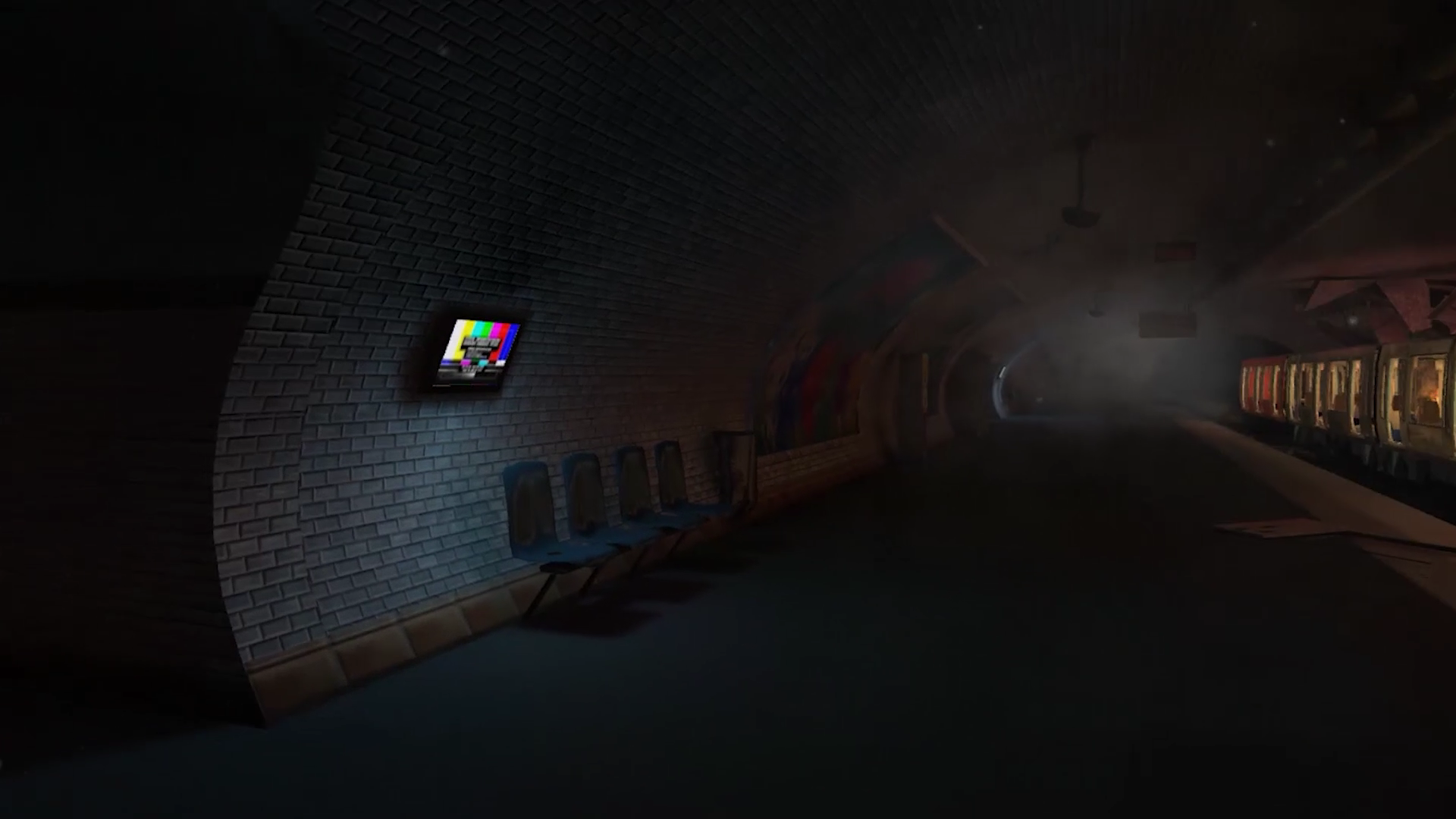 We want to give the most immersive experience possible by making the best use of the body of the player.

You have to actually crouch irl to go in narrow places in the game, you can hide behind shops and other props, lying down in the subway might save your life when the nanites swarms passe by, etc.

In Terminus your whole body is an important input, as well as the controllers. 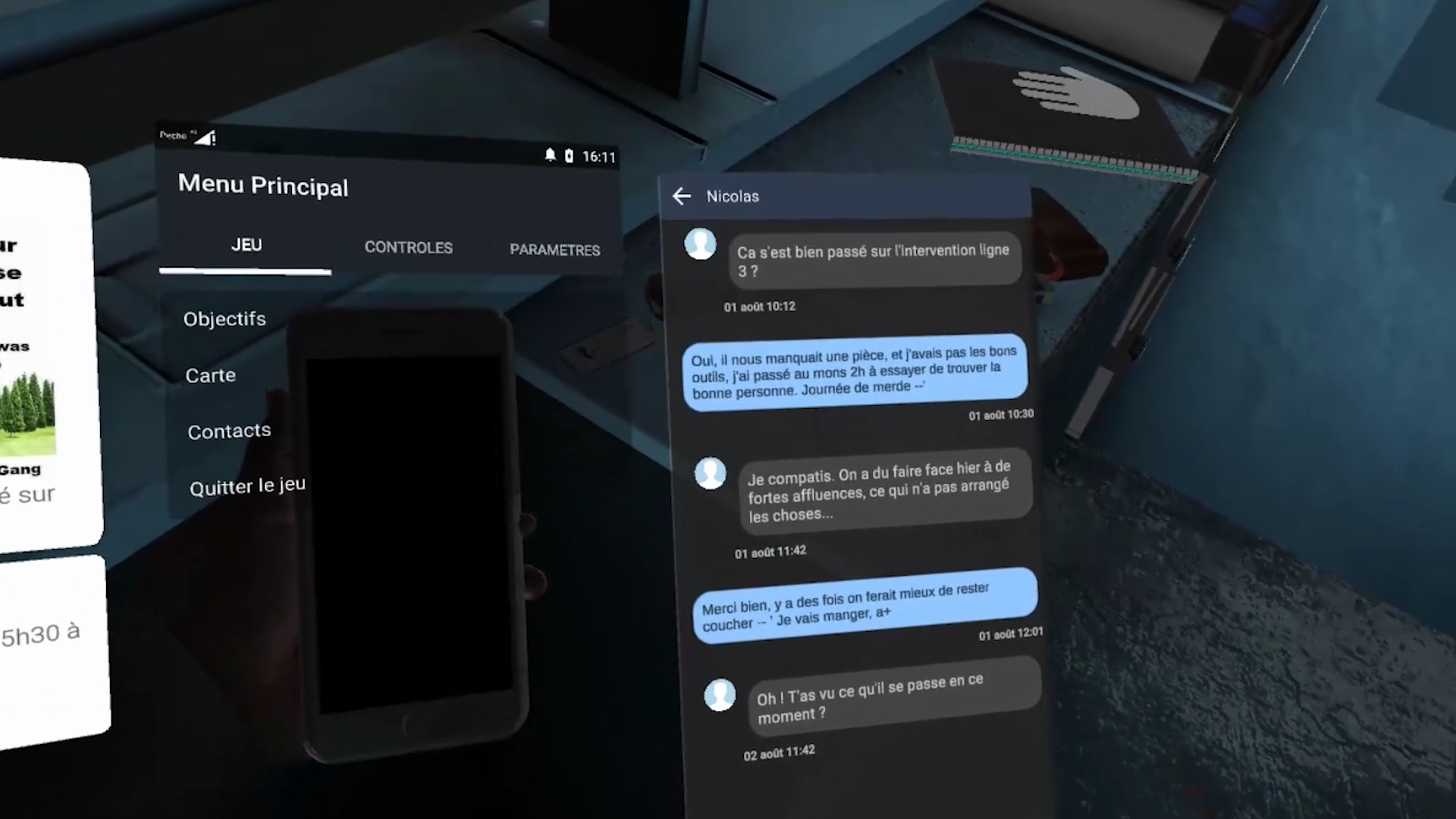 In the game, your phone is a crucial tool to discover the world around you. You can see text messages, tweets, notifications and lore elements to enhance the feeling of reality of the game and what's happening in it.

The game inventory is your backpack. You can store and get objects this way but you must pay attention as you have a limited space and can’t carry too many objects. To get an object simply take it in the bag, and to store it simply release it in the opened bag. 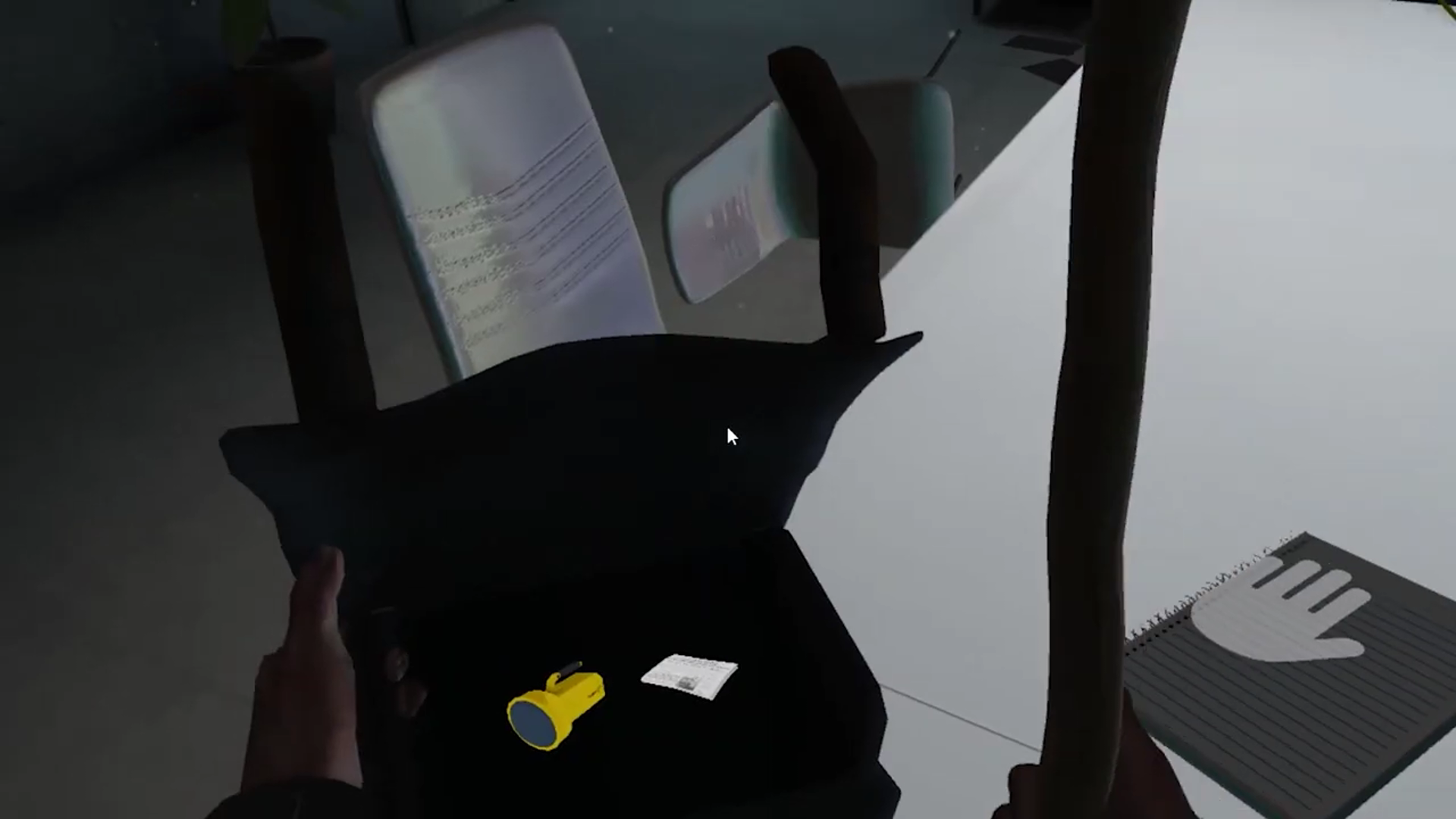 To summarize our work on the interfaces and inputs : before doing something in Terminus, your first thought should be “how would I do it in real life ?” 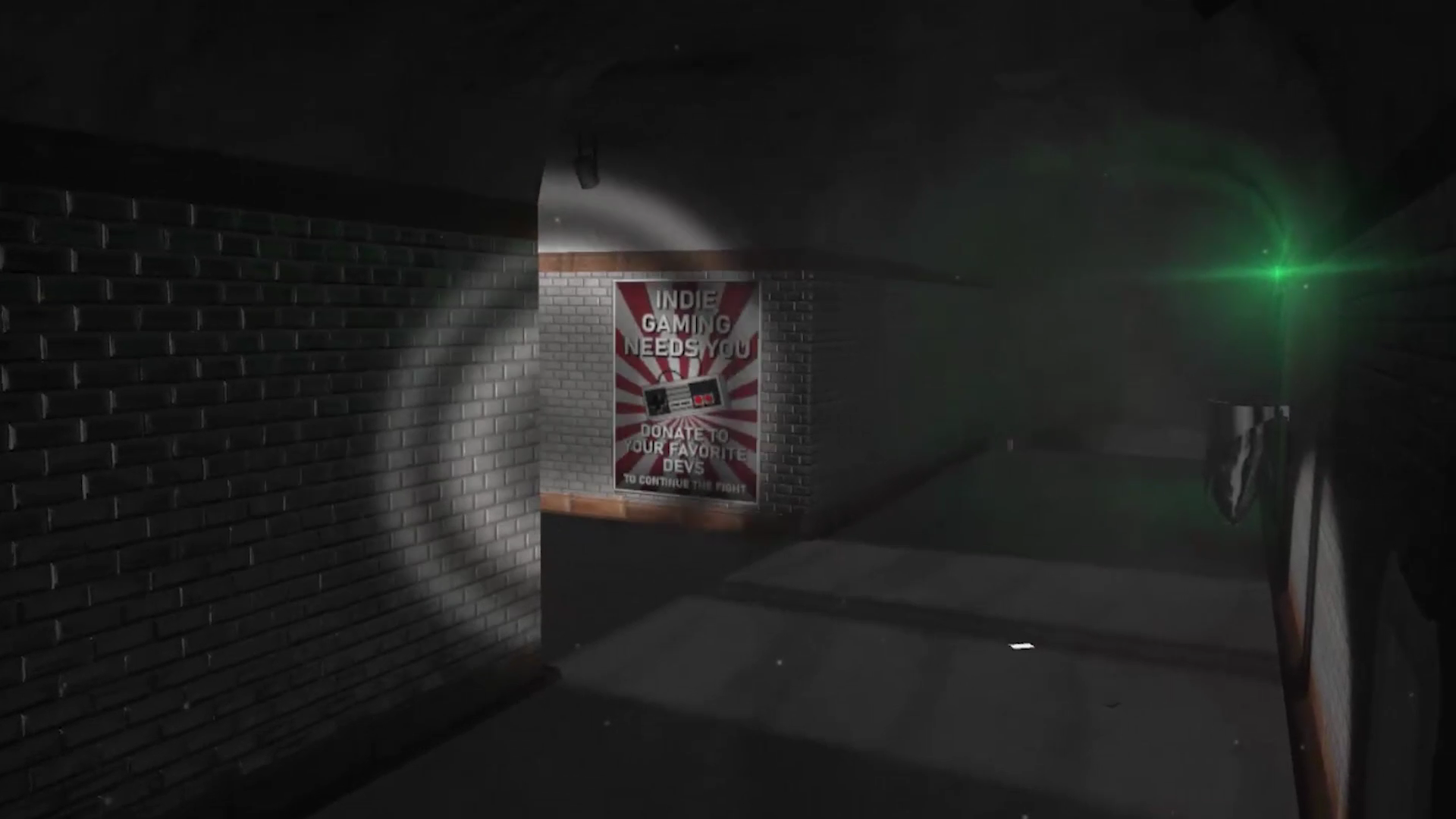 Dont hesitate to reach us out on our Discord (or by message on IndieDB) to bring your proposals and feedbacks : Discord.gg

To navigate in VR in our map, we tried to make the player move when he moves his hands (exactly like when we normally walk). It still needs somme tweaks...

While developing our VR FPS project, we came across a thorny problem: How to manage character animations in the first person?

(this demo is playable on Oculus Quest) Project TERMINUS is a survival horror VR FPS, with Half-Life vibes. The game will take place in the city of Paris...