Of the games we’ve looked at this year, Project Temporality is among the finest examples of unique gameplay and clever design that we’ve seen thus far.”
87/100 – Gamecrastrinate

“Puzzles stay challenging and never grow old—which is particularly impressive given how much time you spend in some puzzles, unlocking and then rewinding new sections with your clones”
9/10 – Game Zone

Project Temporality is a third person action/puzzle game built around the concept of allowing the player to play with time. Thanks to our proprietary engine Sparta 3D we make the fourth dimension as available as the other three. Just as with a VCR you can rewind time or fast-forward through it seamlessly.

Combining this and our time line concept you will solve mind-bending puzzles, by giving yourself a helping hand. Any time you need a friend, you can be that friend. Create a new timeline at any time/any place there are no restrictions. This game is all about giving you full freedom in four dimensions.

Solve puzzles involving lasers, mirrors, force fields, trap doors, platforms, keys etc. Exploit time to do the impossible. Explore the world and see into the mind of its people. We hope that you will enjoy the result of our years of evenings and weekends.

Project Temporality wins boot most innovative and best game at the golden chip!

With any Swedish indie developer being allowed to send in their games. So we decided to enter with Project Temporality and 4-5 months later we got a message from the jury asking us for keys so that they could play the game. Just a few weeks later we learned that we have won not only one but TWO of the three categories which was absolutely overwhelming. But not being able to tell anyone was torture. 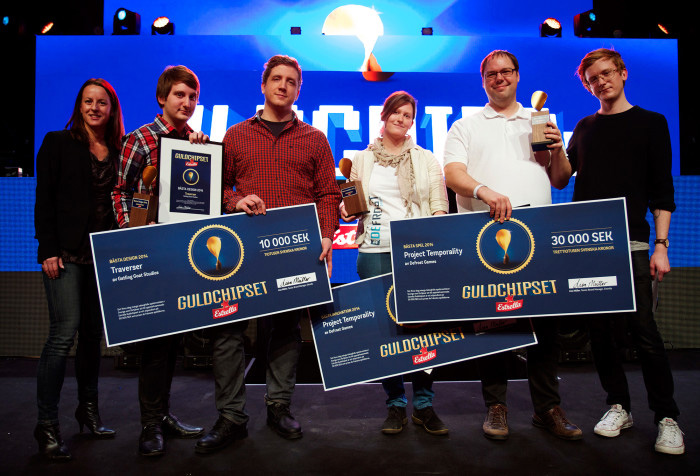 So this weekend we traveled up to Dreamhack to receive the awards and to finally be able to tell everyone. It was a rough day with around 7 hours of travel but it was worth it, standing there on the stage realizing you have won booth most innovative and best game vs some pretty stiff competition in the Swedish games industry was awesome !

The Jurys Motivation for Most innovative game translated to English was
“Temporality is a clearly underdeveloped game mechanic that here is thoroughly explored and shows the possibilities of the fourth dimension. The result is booth interesting and entertaining. Innovative and Impressive!”
For Best game the Jurys Motivation translated to English was
“A well composed,solid and polish “FPP” with the right touch of humor. The brain hasn't had to work this hard since Valve released Portal; Brain workout in four dimensions – it can’t get much more trickier than that ! The short version : a game that leaves you wanting more!” 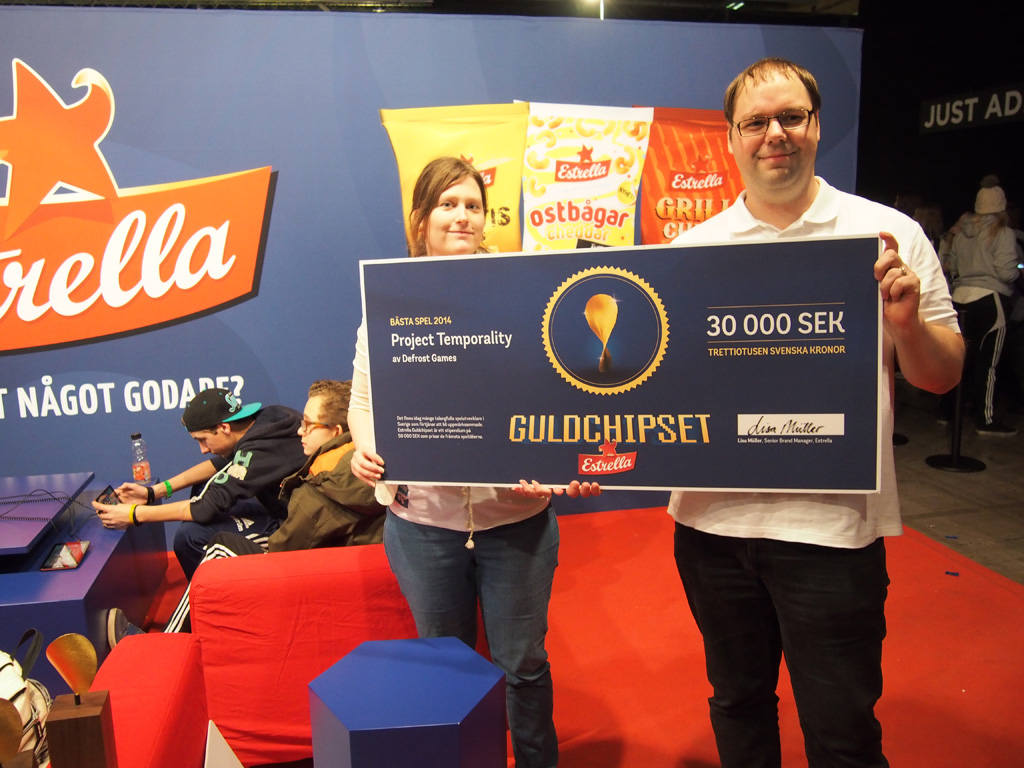 We talk about our new patch and the future of Project Temporality while adding in the happy news that all our Desura customers will now also receive steam...

Project Temporality picks up some STEAM,33% discount on Steam during launch week

We are extremely happy to announce our Steam launch today, except for steam we are also moving into 70+ digital stores worldwide. After 4 years journey...

Asking for your feedback

Finally Project Temporality is now released! And we are running an extension of our preorder sale to reward early adopters. So if you are interested and...

This game reminds me of Reset (the robot time travel puzzler), in a good way. The only thing I'm worried about is first person platforming. A lot of people, myself included, find platforming much more difficult in first person.

yeah we got a bit scared when reset announced but by that time we had revealed our first trailer over a year before so not much to do if they choose to do a similair game. But after seing their actual gameplay footage (not the gameplay trailer) we are not really worried anymore.

We are totaly in agreement with you about first person platforming. Thats one of the major reasons we made Project Temporality a Third person game instead. In the end the platforming is never very complicated, especially since if you miss a jump just rewind time a bit and redo it :)

Hmm... this looks interesting/good, just a question though is this in any way related to Prometheus, an UDK demo that came out a few years back because they look/sound pretty similar?

Nope we didn't learn about prometheus until we released it. But booth this and Prometheus is Derivative from cursor 10. However while prometheus copied cursor 10 straight off(btw I did like it when i found it and played it rhough so I'm not trying to diss it it. It's just a different game). With no rewind and all clones having to restart from the beginning of the game. We instead wanted to fix what we perceived as issues with cursor 10 and a huge issue with it (and promethues) is that you have to start from the beginning every time and the puzzle becomes more about exploring the world than solving puzzles + you got a lot of pointless repeating. By changing so you could rewind time forward and backward and spawn a clone at any time and let it run for any time (promethues had a fixed time per clone) opens an entire new world of puzzles and possibilites so that when and where you spawn your clone matters alot.

So while we now they look Mirilla in a trailer they play very differently. The thing about temporality is as one of our let's players said "You really have to play it to understand why" and that sums it up. The differences in how you think and act are huge even though the visuals might be similair.

How do I get the game? It looks great.

We're still in progress but it will be released on Desura and some other places.

can you please email me this game it is brentwilliam98@gmail.com

Thanks we are finally getting ready to start making some more noise :)